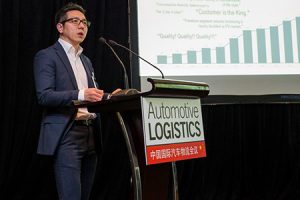 BMW’s joint venture in China with Brilliance Auto, BMW Brilliance, has said it does not expect to feel any impact from the ongoing changes to maximum car carrier dimensions in the country – even though it has seen a huge increase in vehicle production and sales volumes.

That is because the company has already put in place a major network redesign intended to improve lead time, reduce damage and enhance customer experience that just happens to fit in with the changes taking place, Michael Tian (pictured), head of finished vehicle logistics for BMW Brilliance, told the 2017 Automotive Logistics China conference in Shanghai last week.

Many carmakers and logistics providers in China have worried about capacity challenges as the country transitions to new, smaller dimensions for trucks. The new rules, encapsulated in regulation GB1589, are reducing dimensions and changing loading requirements in several stages.

Without action, the number of trucks needed by September next year to move current vehicle levels will be 2.5 times the number needed before the rules were put in place – rising from around 40,000 to 100,000, according to the managing director of Gefco China, Laurent Sik.

“The GB1589 change was big and, of course, we also knew about it. In fact, the industry has been expecting it for the past 10 years,” said Tian of BMW Brilliance at the event. “We did not plan anything for GB1589 – we ignored it. But we did plan something for the customer focused on cost, efficiency and quality.”

Customer lead timesOver the past two years, BMW Brilliance has implemented a comprehensive network of vehicle distribution centres (VDCs) in high-density areas across China. As around 95% of BMW sales in China are from stock, with customers preferring speed of delivery to custom specifications, these hubs allow dealers and customers to receive orders more quickly.

“BMW Brilliance’s total lead time is not as important as the customer’s lead time,” said Tian. “They don’t know or care about vessels, the number of quality checks that we need to do, the warehousing, etc. Instead, the customer measures lead time from when he pays for the car.

“That is why we set up warehouses,” continued Tian. “By storing cars closer to consumption points, the customer gets a car in one to two days. That makes them happy.”

Current VDC locations for BMW Brilliance include Beijing and the port of Dalian in the north, and the ports of Shanghai and Guangzhou in the south-east and south; in the west, it also has hubs in Xi’an and Chengdu.

All of the hubs except Beijing are connected to BMW’s plants in Shenyang, north of the capital, by multimodal shipping or rail links (cars move to the Beijing VDC directly by road). Cars move by rail to Dalian, and from Dalian to Shanghai and Guangzhou by short-sea coastal shipping; cars also move by rail to Chengdu and will also soon do so to Xi’an.

Join us at seaTian praised the cost, stability and reliability of the services. With vessels from Dalian carrying around 1,300 BMW Brilliance vehicles per shipment, he pointed out that it was much easier to track the timing and location of one vessel with this many vehicles than it would be to track the many trucks needed to carry them.

The short-sea services began in high volume last year when BMW Brilliance started using vessels rom Dalian owned by Chinese logistics provider Changjiu Group, which has been expanding its fleet and services following liberalisation of the Chinese domestic shipping market. “Early on, the price of shipping was not so cheap but now, as new entrants enter the market, the price has come down,” said Tian.

BMW Brilliance appears to be the only carmaker using short-sea shipping to such a high degree. Carmakers in Chongqing and Wuhan, for example, ship vehicles by barge along the Yangtze River; those in the Shanghai area also use coastal shipping, including SAIC joint ventures. But Tian hopes that others will join the services he is using, particularly on backhaul shipments from Shanghai or Guangzhou.

“Why don’t you join?” he asked manufacturers and logistics providers. “It would be cheaper still. The vessel is going empty back to the north and you can share the privilege with me. Initially, you would get very good rates or maybe not even have to pay for shipping at all.

“In two-to-three years, when we renegotiate the contract, then we could consider how to mutually gain, but initially it would be very attractive to others to use the backhaul,” he added.

Ready for changeMichael Tian also acknowledged that, in future, customer requirements and desires might change. In 10 years’ time, for example, China’s hugely important ecommerce market, along with new technology, may even change the way that customers shop and use cars, including some expectations of home delivery.

More immediately, however, BMW customers in China may start to resemble those in other markets, notably in Europe, which prefer to custom order many features of their vehicles.

But Tian suggested the joint venture carmaker was already prepared for such a change.

Currently, BMW Brilliance’s vehicle distribution centres are not doing post-manufacturing work or adding accessories, as similar centres for BMW elsewhere in the world might for imported vehicles. However, the carmaker’s systems are already set up to allow for this.

“If customer trends change, then we will be able in the future to use the VDCs to shorten the overall lead time for personalised vehicles,” Tian confirmed. “We are ready for change.”