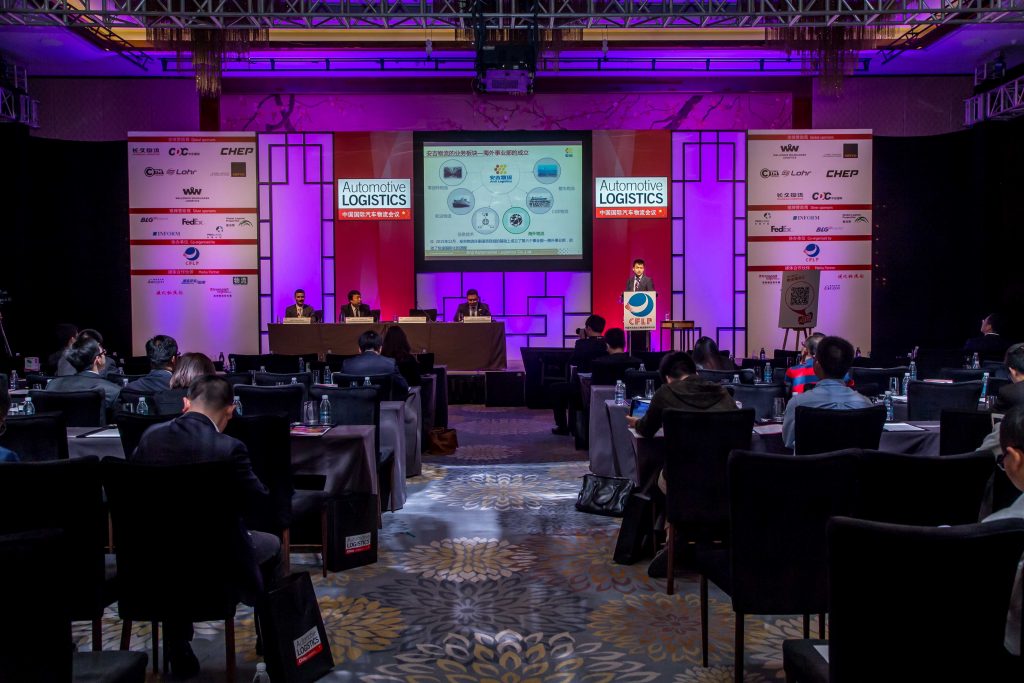 As vehicle production and sales growth accelerated in China over the past decade, there have been huge investments in domestic logistics operations, including transport assets, warehousing and systems across Chinese companies, joint ventures and the local subsidiaries of global firms. Now, as the Chinese market matures and domestic production growth slows, these companies – encouraged by government policy – are increasingly developing international port, rail and freight forwarding operations.

The 2016 Automotive Logistics China conference in Chengdu revealed some of the efforts among local and joint venture logistics companies to cast their automotive freight networks beyond China. For some providers, overseas operations are concentrated on serving Chinese OEMs’ vehicle or knockdown kit exports, though increasingly providers aim to diversify both their services and client base.

The Chinese government is also pushing this development as part of economic reform efforts, including targeting greater Chinese trade and influence in regional and global markets. The ‘One Belt, One Road’ initiative, for example, has encouraged the opening of trade routes, including long-distance rail links with Europe and central Asia, spurring a number of providers to grow overseas.

“We can already see moves by Beijing Changjiu, Anji and Changan Minsheng, all of which are major domestic providers,” said Ma Zengrong, general secretary for the China Automotive Logistics Association, a Beijing-linked organisation that is part of the China Federation for Logistics and Purchasing. “We are quickening our steps to go international. The Chinese government is always stressing the importance of our economy going from ‘big to strong’ – to do that, we need to go international.”[sta_anchor id="1"]

Homegrown heroes on a global stageAnji Automotive Logistics, the logistics subsidiary of the SAIC Group and China’s largest automotive logistics provider, already has overseas or joint venture operations that include knockdown kit-related logistics and packaging, aftersales and vehicle logistics; it currently has facilities or subsidiaries in markets that include the UK, Germany, Thailand, Indonesia and the US, while it is also exploring freight services for China to and from the US and Europe, according to Gu Mingji, overseas business operations manager.

Anji is currently exploring expanded international services in conjunction with several players, including its own ro-ro subsidiary Ansheng, its important joint venture with Ceva, and with SIPG Haitong Logistics, which operates China’s largest vehicle terminal at the port of Shanghai.

The SAIC Group, which has major joint venture operations with General Motors and Volkswagen Group, already exports and imports material to a number of major markets, including North America, Europe and South-East Asia. This year, Anji is looking to deepen its US presence with a representative office to cover multiple customers, while also targeting Europe.

“We are negotiating with big clients in the US to provide management for their warehouses,” Gu said. “We are trying to set up a route from Shanghai to Detroit or other major automotive cities in the US.

“Later this year we are also going to conduct a similar study in Europe as have already done in the US,” he added.

This past December, Anji established a dedicated overseas office with the goal of accelerating international activity. “With so many companies involved, we needed to set up an overseas business unit,” Gu said.

Changan Minsheng, the Changan Group-owned logistics subsidiary, is also serving its customer’s exports to markets in central Asia and the Middle East, including through its joint venture with APL Logistics, according to Yang Ming, international company general manager of that JV – Chongqing Changan Minsheng APLL Logistics.

Beijing Changjiu Logistics, a privately owned multimodal logistics provider, has extended its rail service offering between China and Europe along the Trans-Siberian railway, and is exploring global freight forwarding services. Liu Dawei, marketing director for the company, said that the company aims to increase its China-Russia and China-Europe rail services – which is operated in partnership with DSV/UTI – to weekly block trains starting this May. The logistics provider is also looking to increase air freight services between Europe and China.

“This June we will connect Guangzhou and Frankfurt with a weekly air cargo service on a Boeing 747, which will be a very good supplement to sea and rail freight,” he said.

China’s long distance rail services have been gaining more interest among carmakers, even at a time when vehicle imports and exports to and from China have declined. The Chengdu Municipal Port and Logistics Office, for example, is aiming to see trains between Chengdu and Europe increase from 100 last year to 400 this year, and 3,000 by 2020. Operators in China are increasingly active along the route by opening offices and forming partnerships across the wider region in Asia and Europe.

China’s rail operators are also getting more involved in international trade along the route. Gao Feng, president and general manager of China Railway Special Cargo Automobile Logistics – the branch of the state-owned China Railways specialised in vehicle logistics – revealed that the company had established a joint venture to help extend its reach and service for long-distance international rail flows. Among the shareholders in this joint venture is China Railways’ container transport arm, which has overseas facilities in a number of locations, including Iran, central Asia and North Africa.

“We don’t have any overseas facilities, so that is why we will work with them,” said Gao.

He added that the railways needed to build up overseas resources to help manage return freight and two-way flows, including between China and Mongolia, Uzbekistan and Germany.

Such collaboration across Chinese logistics providers or their joint ventures may be one way for these companies to extend resources into new territory. Anji’s Gu Mingji pointed to spare parts distribution as an example. “I’ve already put forward a suggestion: in aftersales spare parts distribution, there is room for collaboration. In South Africa, America, and the Middle East, we’re looking into the possibility of setting up regional distribution.”

Yang Ming at Chongqing Changan Minsheng APLL Logistics also sees room for companies to group together to find economies of scale. For example, while his company serves a concentration of exports to Russia, Iran, and Ukraine, he points to a serious lack of service providers covering global export logistics from China, as well as a lack of coordination across all legs of the export chain.

“In the future I hope we can set up an automotive logistics distribution network by integrating with the rails and expressways,” he said.[sta_anchor id="2"]

Following the freight footstepsChinese automotive logistics providers are going international in part to follow their main customers or owners into international markets. For example, the country’s major western joint ventures are increasingly integrated into global platform and supply chain strategies, and thus require good links to other markets. At Changan Ford, Abutan Lindsay, deputy director for material planning and logistics, is encouraged to see Chinese providers expand their global reach.

“Ford exports a lot of material out of China to support its global product line-up,” he said. “The hope would be that as companies become globalised in their capability, it would be another driver in reducing costs and creating natural loops in production material, as well as vehicle shipments on some of those lines. It would be a definite benefit to Ford to have another world class LSP who could add to the competition base and drive down costs in the future.”

Providers like Anji are also involved in knockdown kit exports out of China to multiple global exports. Wu Songquan, director of the automotive industry policy research section of the China Automotive Technology and Research Centre, pointed to Chinese OEM plants abroad as drivers of this logistics expansion. He estimated that Chinese OEMs are now assembling around 340,000 vehicles per year in overseas markets, which require logistics links back to China.

"Those who survive this current cycle will be highly internationally orientated. If you don't go international, it will be impossible to live on in the domestic market alone. For Chinese logistics providers, it will also be important to expand their customer base to the outside world beyond China" - Wu Songquan, China Automotive Technology and Research Centre

In other cases, China’s many smaller, state-owned manufacturers may lack the resources and expertise to manage exports, and require more expertise from their logistics providers to overcome their lack of scale. Wen Tao, logistics manager at Zhengzhou Yutong Bus, a state-owned commercial vehicle manufacturer, said his company exported more than 7,000 vehicles last year to markets that include Sudan, Ethiopia, Cuba and Vietnam. With the low volume and remote locations, delivery times can extend to as long as six months or more, with many risks across the supply chain that the company struggles to control.

“We lack experience and we hope to outsource services to experienced 3PLs to help us devise appropriate point-to-point services,” he said. “We are working with ship owners and suppliers to find the best solution.”

While global 3PLs may have more experience in such areas, OEMs like Zhengzhou Yutong might be better served by the local connections and lower cost base of Chinese providers.[sta_anchor id="3"]

Going global as government policyAs well as following exports abroad, the global expansion of Chinese logistics providers is also part of the Chinese government’s broader economic strategy to modernise and globalise China’s industrial base, and thus make homegrown companies more competitive. The government is actively encouraging OEMs and companies to set up operations overseas rather than just exporting from China, according to Wu Songquan from the China Automotive Technology and Research Centre.

“We are encouraging more companies to set up plants globally to localise their supply chains upstream and downstream,” he said. “The Chinese government has a lot of ways to encourage companies to go global.”

Wu added that over the next decade, Chinese manufacturers would need to modernise their processes and technology further, including by increasing productivity and reducing energy consumption in line with western standards. “We need international practices to govern our future practice and help us compete,” he said.

Dr Zhang Xiaodong, dean of the Transportation Institute at Beijing Jiaotong University, pointed to Chinese government policy that further exposed manufacturers to market influence and international competition, partly in an effort compete globally and to encourage the adoption of global standards at home. “This global expansion among Chinese companies and resulting market influences will be a major part of the 13th five-year plan,” he said.

“In the 13th five year plan, we have to focus a lot on geographic expansion on both our own fronts in China, and internationally,” he said. “For import and export, what impressed me most is that new and emerging markets will come to the fore. We will need more value added services for logistics.”

While government policy, financing and encouragement – including along ‘One Belt, One Road’ routes – is a significant factor in pushing Chinese OEMs and providers abroad, such expansion may also be a matter of survival, according to Wu Songquan, especially as growth in the domestic market slows.

“Those who survive this current cycle will be highly internationally orientated. If you don’t go international, it will be impossible to live on in the domestic market alone,” he said. “For Chinese logistics providers, it will also be important to expand their customer base to the outside world beyond China.

“The government will do more and carry out more reforms to cope with this trend. But logistics providers won’t be able to concentrate on one customer or client any longer,” he warned.