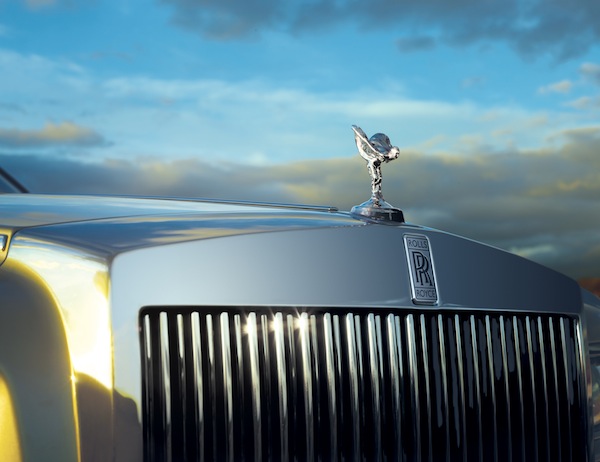 Few products or possessions – a private jet, a Beverly Hills mansion, a yacht off the coast of St Tropez – can match a Rolls-Royce car as a symbol for wealth and prestige These days, outside the sheikhdoms of a few oil-rich Arab nations, even fewer groups can match the Chinese for their attainment of such wealth or their desire to show it. In 2012, less than ten years after sales began in the country, more than a quarter of the 3,500 Rolls-Royce cars built in Goodwood, England ended up on Chinese roads.

Growth in recent years in China had been staggering for the brand, until levelling off in 2012, when the US regained its position as its top market. Many manufacturers

across the luxury automotive segment noted the uncertainties that followed a change in leadership in the Chinese government, including rumours of a luxury tax and other measures that might impact the purchase of something as expensive as a Rolls-Royce. In China, a Ghost with a standard wheelbase starts at Rmb 4.2m ($690,000), while a Phantom can cost up to Rmb 10m.

Such uncertainties now appear to have waned or been brushed aside. Henrik Wilhelmsmeyer, director of region mainland China, who leads Rolls-Royce’s sales, marketing, aftermarket and finance functions, says sales are expected to be higher in 2013 than in the previous year. The availability of the new Wraith by year-end was also expected to add momentum. The production run for 2013 has already sold out, he says, so Rolls-Royce’s final sales figures for China will depend on how fast the cars are delivered to dealers.

Flying to keep up

To get those cars to Chinese dealers as soon as possible, it turns out that jet engines aren’t the only Roll-Royce products that take to the air. “As the demand is overwhelmingly strong for the product, some units are even air freighted on request to shorten waiting times for customers” says Wilhelmsmeyer.

The flying Wraiths are part of the brand’s growth as well as a logistics solution to a challenge somewhat unique to China. Across its markets, Rolls-Royce must balance bespoke production in the UK – including handwork processes with sometimes unpredictable lead times – against the expectations of customers who have paid a lot of money. In China, those expectations are among the highest anywhere, with many consumers, even in the super luxury vehicle market, keen to drive their vehicles off dealer forecourts soon after purchase.

At the same time Rolls-Royce has also grown its ‘bespoke’ business in China, which closely involves the customer in the design and materials used in a vehicle. Such a unique approach also requires a highly flexible logistics process. The creative time with the customer needs to be balanced with the shortest possible lead times, which then results in air freight requests, says Wilhelmsmeyer. 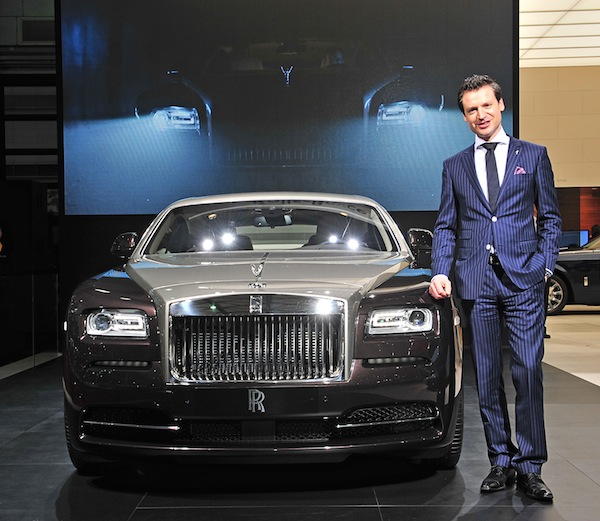 Despite that being the case, Wilhelmsmeyer stresses that controlling cost matters a lot to Rolls-Royce and its customers. The majority of its cars still arrive on ro-ro vessels, with BMW China managing their import and combining distribution with BMW and Mini. Across the automotive industry, the use of air freight during a launch isn’t actually that rare, even for brands less premium than Rolls-Royce, but the carmaker’s 18 dealers comprise a relatively small network in China, which increases the prevalence of airbourne deliveries.

“Logistics is playing a very important role for Rolls-Royce,” says Wilhelmsmeyer, who worked in vehicle logistics earlier in his career, including having responsibility for BMW imports when he first arrived in China eight years ago. “Customers have a high expectation towards the brand and that includes accuracy on delivery times. Sometimes our logistics colleagues have to find a way to catch up.”

The challenge for such vehicle logistics has become more difficult to manage following a change last year in which the customs authorities designated Beijing airport as the only location where vehicles arriving by air could clear customs. While the change was an improvement for vehicles that previously had to be moved to Tianjin to clear customs after landing in Beijing, cars can no longer be cleared in Shanghai, which is closer to more customers in major eastern and southern markets in China.

However, even air freight isn’t always a sure solution to speedy lead time. “Even with air freight from the UK, we still face uncertainties over how long it will take for customs and CIQ [quarantine] clearance, as well as the in-land transport,” says Wilhelmsmeyer.

The pressure on delivery is in some ways even more pronounced for the aftermarket. Besides the standard four-year warranty on a Rolls-Royce, customers expect such a premium vehicle to be serviced quickly. Furthermore, on October 1st this year, China introduced the so-called ‘3R’ regulation (repair, replace or return) which mandates that spare parts must be available within a certain time period, and that defects in the first 60 days give customers the right to return the car (similar to the ‘lemon law’ in the US). These regulations put even more pressure on quality and spare parts delivery, says Wilhelmsmeyer.

While Rolls-Royce shares a number of back office and management functions with BMW, it has a separate aftermarket network and currently does not have a local parts distribution centre in China, which means it sends all spare parts to China by air, again with potential for delays in customs and inland transport (which often involves domestic air freight from Beijing).

"We will, of course, try to have synergies with BMW logistics, ideally going into the same warehouse facility and using the same channels of supply, but such integration takes time" - Henrik Wilhelmsmeyer, Rolls-Royce China

Wilhelmsmeyer says the company is currently studying plans to introduce a local parts warehouse that would buffer the aftermarket supply chain, allowing it to import more parts by sea freight and better regulate domestic distribution. “We will, of course, try to have synergies with BMW logistics, ideally going into the same warehouse facility and using the same channels of supply, but such integration takes time,” he admits.

In the meantime, Rolls-Royce has introduced a new tactic in certain locations, whereby dealers can be selected to hold a higher inventory of parts and to deliver to other dealers in case there is a specific part needed that isn’t available elsewhere in the market.

While Rolls-Royce and the BMW Group are exploring the best logistics options to improve speed to market and services, the company’s approach in China is arguably geared more towards building up the Rolls-Royce experience and its brand awareness. In some cases, this experience can alter expectations for vehicle or parts delivery.

One example is the encouragement of customers to introduce their own custom ideas to vehicles as part of the bespoke programme. Wilhelmsmeyer says this approach is starting to take hold in China, although it is still below the level in markets like the Middle East or the UK. In the first three quarters of 2013, truly bespoke orders (rather than choosing options) had increased 104% in China.

“Some of our customers do bring in special ideas. Recently, a customer wanted us to build into his Phantom’s interior a piece of wood from thousand-year-old trees that belong to his family,” he says. “These ideas are very unique and of course expensive, and are part of what makes Rolls-Royce special.”

Because of the high variability in Rolls-Royce production, the brand tends not to have the same visibility and predictability on lead times as BMW’s order-to-delivery process, which tracks and updates delivery times to customers throughout the supply chain. Instead, says Wilhelmsmeyer, more intimate communication between dealers and customers is necessary. “We have very, very individual requests on how things are supposed to be treated or delivered,” he says.

"Seeing the car finished with his own eyes in the special environment in which it was built can shorten the perceived waiting time for a customer" - Henrik Wilhelmsmeyer, Rolls-Royce China

In some cases the delivery process ends up resembling a concierge service. Wilhelmsmeyer points to customers who would like to visit the factory in Goodwood to experience “the birthplace of the car”. Rolls-Royce arranges the travel, perhaps in combination with a trip to London. Afterwards, some customers will then choose to send the car to China by sea rather than air. “Seeing the car finished with his own eyes in the special environment in which it was built can shorten the perceived waiting time for a customer,” he says.

Take good care of my driver

The experience created for aftermarket must also be unique. Wilhelmsmeyer points out that the service level for premium brands in China is already high compared to most global markets, with comfortable waiting areas, free wifi, massage seats and even cinemas found in a number of dealer workshops. For such brands, but especially Rolls-Royce, it is often the chauffeur who brings the cars for servicing rather than the owners, and so the company must pay special attention to them. “A driver’s expectations are very important, as he is often the one who manages his customer’s car collection. He will manage different brands – the average Rolls-Royce customer in China owns four cars – and so he can be quite influential on the owner when considering the service he received.”

The company therefore holds special programmes for drivers, including training workshops on how to handle and maintain the car. “This is important to customer orientation in how we try to differentiate our service levels, but you only generate such advantage until others come up with a similar level of service, so you need to introduce a lot of changes in a short period to have a competitive advantage,” he says.

Wilhelmsmeyer also sees a number of important areas in the aftermarket to further increase revenue and profitability. One area is that customers who elected to have a low amount of customisation on vehicles when they bought them could add more accessories. This may include adding family symbols on the headrest or installing rear curtains, for example. There are limits to what can be added to the car outside the factory, but Rolls-Royce is pushing these options across its dealer workshops. The sale of accessories for the safe storage and maintenance of the cars is also important, such as branded car covers.

Such growth in customisation, service and accessories might be equally if not more important than expanding Rolls-Royce’s new vehicle sales in China. As Wilhelmsmeyer says, customers “do not expect to see a Rolls-Royce on every corner”, so growth of the dealer network will be moderate. The company will grow to 20 dealerships by early 2014.

Nevertheless, he expects that the Wraith will open up new markets in China for the brand, as the model is expected to attract buyers even younger than the average Rolls-Royce customer in China (who, at 41 years old, is already 20 years younger than in most markets, as pointed out recently by Peter Schwarzenbauer, BMW board member for Rolls-Royce). The relevance for managing the supply chain is also expanding for Rolls-Royce in China, whether through more dealers and distribution centres, by using expedited transport, or by setting higher levels of service and customer care.

“Rolls-Royce has got a lot of room for growth in China. The next step is to continue to optimise the parts supply chain,” says Wilhelmsmeyer. “Above all, encouraging more bespoke orders for our vehicles and in the aftermarket is the most relevant for Rolls-Royce, because that helps us to sell value more than the volume of units, which is quite important for a brand like ours.”