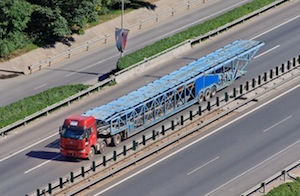 A strange era in China’s vehicle logistics industry may finally be on the verge of ending. In a country where 80% or more of passenger cars move by truck, and around which an industry of 30,000 or more car-carrier trucks has developed, the vast majority of equipment in use is technically illegal. However, new standards that the government is due to finalise in 2016 may finally set the fleet on the path to standardisation – although many issues around implementation remain.

China categorises car carriers as semitrailers, which according to the national standard ‘GB1589’ should have a maximum length of 16.5 metres. In practice, however, car-carrying semi-trailers usually extend to 22 metres. In recent years, to keep up with China’s expanding car market, carriers have pushed the limits: 27-metre trucks have become an unofficial norm, often with double trailers hauling two rows with as many as 25-30 cars, in what some in the sector refer to as ‘aircraft carriers’.

Chinese authorities have technically enforced the law by fining carriers. However, provinces and municipalities across China have applied rules differently, often granting licences to equipment even though it violates national standards. Plus, the economy of scale that logistics providers achieve by carrying so many cars has far outweighed penalties. Such fines also do little against the threats to road safety that the overloaded trucks pose.

There are complying logistics companies, but such ‘hats-off cases’ are few and far between, say industry sources. The fact that virtually the entire industry is in violation makes it even more difficult for legal carriers to compete. The prevailing justification in the sector has been that the Chinese government needs to recognise car carriers as a special segment of the trucking sector, with its own standards, similar to in the US and Europe.

However, while the vehicle logistics sector in China has waited years for a new national standard, many have also done so in trepidation. That is because while a new standard was always likely to be longer than that allowed today, it would also be much more restrictive than the ‘aircraft carriers’.

A move towards centre-axle trailers
Either way, the wait is nearly over. Government authorities have already collected industry opinions, and are set to finalise their decision by early 2016, according to Chris Zuo, general secretary of the China Automotive Logistics Association (CALA) of the Chinese Federation of Logistics and Purchasing (CFLP). “Car-carrying trailers are only a small section being addressed in the mandatory GB1589, but revisions to the standard will have a big impact on the entire car industry. [Therefore] there has been a lot of caution in making the revision,” he says.

According to Zuo, the revised regulation will for the first time introduce centre-axle trailers as a new option for car transport on road, as opposed to the semitrailers exclusively in operation today. The new limit is set to be 22 metres in the length (with a limit of 12 metres on the trailer part). The allowable width will be 2.6 metres and the height will be 4 metres, according to Zuo. It is worth noting that the new standard will not alter the length of semitrailers in China from 16.5 metres.

A centre-axle trailer with the new dimensions is expected to load eight to ten vehicles, compared to around six technically possible on the 16.5 metre semitrailer. The adoption of such trailers is based both on capacity considerations and its safer turning performance. Flexible detachability is another advantage.

The Chinese government and vehicle logistics industry are not the first to discover such equipment, as they are common in other markets. Their long absence in China is primarily because they have been classified simply under the ‘full trailer’ category (an A-Frame drawbar trailer in Europe), equipment that has been banned on Chinese motorways for quite some time.

The government has historically taken the lead in establishing industry standards for transport in China. However, in something Zuo considers to be a first, authorities encouraged business associations to come up with their own industry standard for car carriers. “The new [standard] is supposed to be closer to a standard embraced by individual businesses, thus it is more pragmatic,” he says.

CALA, which is a government association but has members from across the Chinese automotive sector, played a key role in proposing standards. A manager at a logistics provider in China, who asked to remain anonymous, agreed that the revision process involved road transport experts, OEMs and government bodies to create a standard that considered both efficiency and safety.

Implementation and enforcement
The official number of car carrying semi-trucks currently in use in China is 29,000. But Zuo doesn’t rule out the possibility that many are left out of the official count. One common estimate suggests that there may be around 40,000 car-carrier semitrailers in active operation in China. With a fleet of this size, addressing their non-compliance won’t be easy.

According to Zuo, there will be a transitional period of about two years to implement the new rule, with a number of proposals under discussion, including eliminating the most egregious violations first. “A preliminary plan is to phase out double trailers and super-long trailers for car transport by 2018,” says Zuo. “But it is also likely to be earlier than that.”

A number of other factors will influence how quickly vehicle logistics companies in China will be able to change their equipment, including costs, and the capacity of rail and waterway logistics – modes expected to carry more vehicles as carriers move away from overloaded trailers, says Zuo. Equipment manufacturers’ production capacity for new centre-axle trailers will be another factor, especially since such equipment has been suspended for years in China.

On the other hand, this change will be a clear opportunity for manufacturers, according to sources. Tianjin Anda-Lohr JV and CIMC Yangzhou used to be two of the manufacturers in this field. CIMC Yangzhou now primarily produces trailers for export, but the chance to serve a large domestic market for the car carrier business would no doubt be attractive.

Despite many uncertainties over the transition, logistics providers in China generally look forward to an early release of the new national standard for car carriers, according to a source at one influential provider. A source at BLG China, another major international logistics provider, indicated that the new GB1589 national standard would positively impact the development of automotive logistics sector in the country. “It will become healthier.”

Executives at logistics providers express concerns, however, including whether the new length, width and axle load requirements will be accurately defined based on both international standards and China’s domestic reality. The implementation period is also a big question mark.

“We are concerned whether during the transitional period local government authorities in different regions in China will use the same [existing] standard while enforcing the new regulation,” said a source at a major Chinese logistics provider.

“What the sector expects from the revised national standard is to see an effective and efficient new trailer solution while safety considerations have been taken into account in the first place,” Zuo said, suggesting that most in the sector would welcome a safer standard as long as it is safe and reasonable.

“But fair implementation is a must,” he added.

Perhaps a larger question is whether or not the new standard will really stop carriers from overloading equipment. Zuo suggested that the length itself isn’t as relevant as will be the enforcement of users and manufacturers of illegal equipment. Overloading could have been avoided even with 16.5 semi-trailer if super-size trailers weren’t so easy to build or get licenced, he suggested.

“People want to know will there be fairness in the transitional period?” pointed out Zuo. “Will there be adequate logistics capacity? Will there be any adjustments to industry rates?”

The next year may provide the answer to ‘what’ the new standards will be, but it may end up raising more questions still.