China’s growth hinges on its ports

China imports more cars from Europe and the US than it exports and the trend looks set to continue. Namrita Chow reveals that in spite of being restricted to five ports for bringing vehicles in, business is booming and ports are investing to secure new volume in years to come.

China may have many ports dotted along its vast coastline, but it only allows a select few to import vehicles. Carriers are mainly restricted to Shanghai, Dalian, Tianjin and Guangzhou. There is a land entry point at Manzhouli in Inner Mongolia, as well as Huanggang, which connects Shenzhen to Hong Kong, but with volumes insufficient to make rail a viable option for land entry, carmakers importing in China have relied primarily on the four “open ports”. For vehicle exports, on the other hand, a larger number of ports can be used. There are fewer official restrictions, and also since exports from China are still relatively few, there is less need for complex ro-ro facilities, as many cars are moved in containers, often to developing markets in Asia, South America and Africa.

But this year China opened another port for imports. Qinzhou Port in Guangxi Province, which opened in January, provides a new route for quicker imports and exports to and from ASEAN countries (Association of South East Asian Nations). Located along the coast in the south of Guangxi Province, Qinzhou faces Beibu Gulf and borders Vietnam on the southwest. With tariffs reduced between ASEAN countries and China, vehicle imports via Qinzhou Port will be cheaper, encouraging vehicle production in ASEAN countries.

Shanghai Port
But the main port for vehicle imports and exports remains Haitong Auto Terminal in Shanghai. Shanghai’s location in the wealthiest coastal area of China plus the city’s links to China’s river system make it an important region for the nation’s expanding car business. 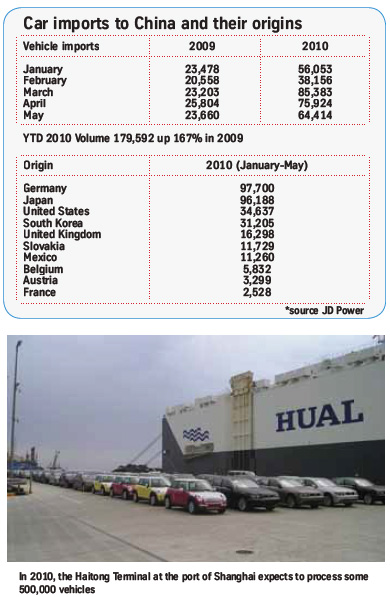 “The current port for importing Volvo Cars is Shanghai Haitong Terminal,” says Leon Liao, of Volvo Logistics, part of the Volvo Group, which includes truck and commercial vehicles. Volvo Cars, now owned by Geely, is separate but one of Volvo Logistics’ main external customers globally. Liao says that Shanghai Haitong makes the most sense for Volvo’s network in China. “There is good infrastructure and the port environment gives access to river, rail, road and air transportation methods.

“In addition, the location in the middle of the Chinese coast is good and is strategically located close to Volvo Cars’ national sales company in Shanghai. At the port itself there is a good selection of service providers and the port authority runs it efficiently.”

metres, with capacity for storing 7,000 cars. Along with customs inspections facilities, the terminal features PDI and battery charging services (already ahead of many Western ports in this regard). A senior executive at Haitong Terminal reveals that Haitong expects to handle 500,000 cars in 2010. Since 2008, Haitong has been expanding its capacity, including the development of a new terminal called Wai Gaoqiao 6, where there will be three more landing positions. Part of the construction is now finished and the terminal is in use, says the executive.

“When the construction is all finished at the end of 2010, Haitong’s new capacity [for finished vehicles] will reach 800,000 units a year,” he continues.

German craftsmanship is in demand
Chinese consumers are demanding more imported vehicles, so much so that shipping lines have had to add capacity to China’s main ports.

“Imports are greater than exports, especially from Europe to China,” says NYK’s Owen Xie. German premium OEMs such as BMW, Mercedes-Benz and Audi in particular have seen rising sales in China. The imported Audi A8 sold 1,111 units in the first quarter of this year, up 43% from last year, says Marvin Zhu, of JD Power in Shanghai. In 2009, Audi’s premium A8 sedan sold 4,088 units in the mainland. BMW has seen sales jump 97% in the first seven months of this year, with China now the number one market for the BMW 7 Series worldwide (see BMW feature on p16 for more). The Mercedes S class has also seen sales rise around 30% this year, according to data from Automotive Resources Asia, a division of JD Power.

Porsche, which has no local production in China, expects sales in China to jump 10-15% this year, says Yi Li, a senior executive at Porsche China Motors. In 2009 Porsche sold around 8,000 cars in China, with the Cayenne being the most popular amongst Chinese buyers. 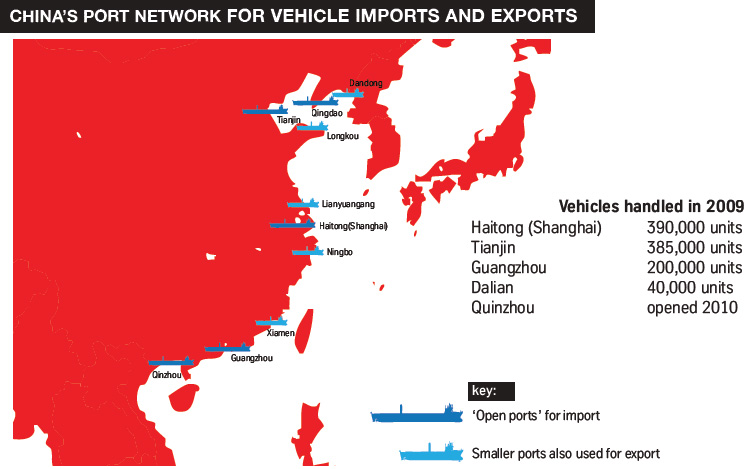 High and heavy calls the shots
In an ideal world, car carriers prefer to pick up vehicles from the main ports of Tianjin, Dalian, Shanghai and Guangzhou, as these have proper ro-ro facilities. But often OEMs that have large exports can demand that smaller ports near their manufacturing facilities are used. This is often the case with commercial vehicle manufacturers.

“Under normal circumstances our ships will only dock at the large car friendly ports, but if there are 200-300 trucks or construction vehicles to pick up, the liner will dock at smaller ports located near the manufacturer,” says Johnny Xia, head of all commercial activities at Hoegh Autoliners in China. “We prefer Shanghai, Dalian and Xingang [aka Tianjin Port] as these have special ro-ro facilities. At Longkou and Rizhao it is risky as they are not proper ro-ro terminals with the correct facilities and equipment,” says Johnny Xia. 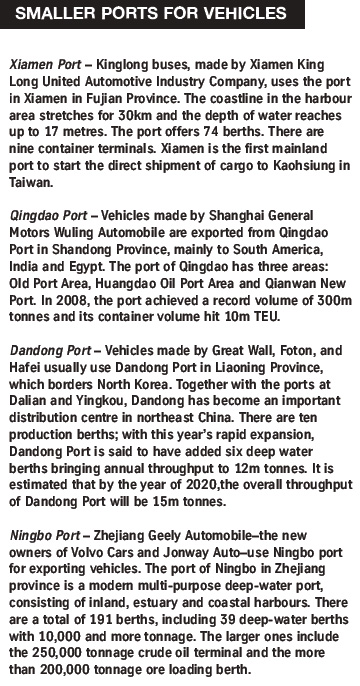 But such smaller ports, including Longkou in Shangdong Province and Lianyuangang in Jiangsu Province, are close to vehicle production bases and a large volume of project cargo will justify pick-ups liners docking here. Xuzhou Construction Machinery Group, commonly known as XCMG–one of the largest heavy machinery makers in China–has its production base in Jiangsu Province and usually insists that vehicles are collected from Lianyuangang Port. XCMG’s dump trucks are now in big demand in South America and Africa.

The port of Lianyuangang is across the water from Japan and Korea and is one of the 14 Chinese coastal cities to be developed as a major production and export zone. Lianyungang is at the eastern end of the New Eurasian Land Bridge and the proposed Northern East West Freight Corridor (NEW).

The NEW Corridor is a project organised by the International Union of Railways and Norway’s Transportutvikling to connect the east coast of the United States to East Asia by train and ship.

“Exports of vehicles can go from any port,” says NYK’s Owen Xie. Apart from Shanghai, Dalian, Guangzhou and Tianjin, the most commonly used ports for vehicle shipments are Xiament, Qingdao, Dandong and Ningbo, he says. “These four also take ro-ro vessels but are generally cargo terminals,” says Xie.

A major hurdle for international car carriers operating in China is that they are not allowed to work domestic routes. Given 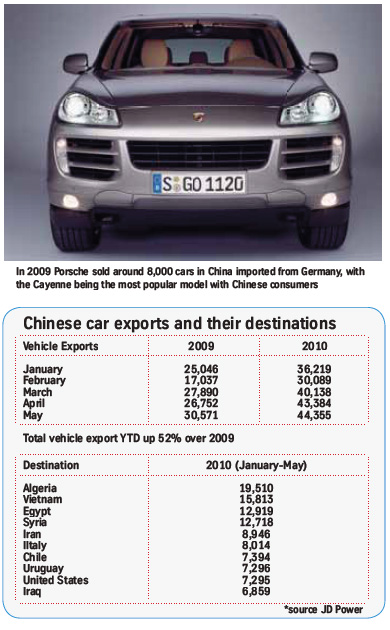 the huge distances involved in moving vehicles from the limited ports of entry to the consumers across the country, and the situation with the railways (which gives priority to other cargoes and passengers ahead of car transport), short-sea shipping within the country would be an attractive logistics solution.

The only way to do this, however, is to form a joint venture with a local logistics provider and gain access to moving vehicles from ports in the north to the south of China. So far there are only a few who are able to offer both domestic and international services for finished vehicles.

Japan’s NYK Logistics was quick to see that to offer services in both international and domestic waters, strong joint ventures would be needed. NYK’s first joined with Cosco in 2002, and has since established joint ventures with Anji Logistics–for providing land transport by trailers–as well as port authorities in Shanghai, Dalian, Guangzhou and Tianjin and a finished car logistics venture in Shenyang. Meanwhile rival carrier Höegh Autoliners is also considering setting up a joint venture to gain access to domestic finished vehicle shipping routes. “The plan is to set up a logistics joint venture with a Chinese local carmaker and also a local port authority–then we can do domestic routes,” says Höegh’s Johnny Xia.

The future?
China’s wealthy are expected to continue to indulge in luxury vehicles imported from Europe. JD Power estimates sales of luxury vehicles in the nation will rise to 530,000 units this year and reach 1.1m by 2015, boosting vehicle imports and placing considerable strain on the ports and hinterland infrastructure needed to move those vehicles to market. It seems likely that short-sea shipping will become critical to meeting logistics requirements for these imports, and more joint ventures similar to what NYK has achieved should be expected. On the export side, as developing and emerging markets in South America and Africa continue to grow, their construction demands will fuel exports of vehicles, particularly high-and-heavy cargo from China.