China's 'One Belt, One Road' strategy under the 'new normal' 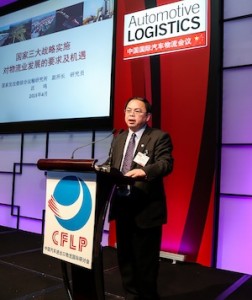 After decades of double digit growth, China is now pursuing an economic model based on slower but more sustainable economic development with a focus on upgrading industry standards and building connections with global markets. The annual growth rate in the economy last year was 7.4% – and 7% in the first quarter of 2015, the slowest the country has seen in decades. However, the current directive is about developing a stronger, more tight-knit and globally extensive supply chain under what has come to be termed in China as the 'new normal'.

Speaking at last week's Automotive Logistics China conference in Shanghai, Ming Wang, deputy director of the Transportation Research Institute of the National Development and Reform Commission (NDRC, pictured) asked how the automotive industry could develop a closer supply chain and strengthen the division of responsibility. "How can different companies and regions work together more closely?"

The answer, according to many in China right now, could be found in its 'One Belt, One Road' policy. This initiative will see new routes linking Europe, Asia, and Africa. It consists of two parts: the 'Maritime Silk Road' linking China's ports with the African coast, up through the Suez Canal and into the Mediterranean Sea; and a new 'Silk Road economic belt' that will link China to Europe and cut through the mountainous regions in Central Asia.

Tu Xiaoyue, vice-president of Beijing Changjiu Logistics said, “'One Belt, One Road' is an exciting concept. We’re currently operating under the new normal of Chinese economic development, where we will not continue the extremely high economic growth rate seen previously. China is now moving from a developing country to a developed country. This slowed down growth rate will be normal, and it will have to be something we face and accept.”

Although 'One Belt, One Road' is currently more of a vision than an operational reality, with the government still trying to figure out the details and no implementation strategy in sight, a significant amount of the Automotive Logistics China conference was dedicated to discussing it, and the vision is looking increasingly likely.

Zhang Xiaodong, a professor at Beijing Jiaotong University and a specialist in transport policy said that China is setting a new path under the new normal. "These new strategies give us an idea about the next step for the central government, and the potential that is out there," he said.

China has just announced that it will use its large foreign exchange reserves to inject $62 billion worth of capital into state-owned "policy banks" to support the 'One Belt, One Road' strategy. The news was announced at the start of President Xi Jinping's visit to Pakistan, where he has promised more than $45 billion in infrastructure investment.

China's economy is partially driven by export, but because of the sluggish economy in the West, the country's ouput have suffered recently. At the same time, China is in the midst of reforms aimed liberalising some aspects of the economy, and moving away from debt-led investment in capacity, and more towards consumption. However, this transition will take time, said Wang, and he emphasised that there needed to be more focus on helping China's regions to work together more carefully. Through a more integrated and developed approach at home, including infrastructure and logistics improvements in rural and western areas, the country could then further develop abroad, including in areas such as vehicle exports.

"China will develop through policy coordination, infrastructure linkage and connection, and winning the hearts and minds of other countries," said Wang. "The new strategies could promote industry partnership on many levels. This means new requirements for logistics in China."

Wang added that, in the past, China has focused too heavily on the ports at coastal cities such as Shanghai. Shanghai port accounts for 95% of containers that are imported and exported, which makes it difficult for other areas of the country to develop. One Belt, One Road is designed to tackle this and allow the deployment of infrastructure, the development of ports, improved transport, and the building of specialised logistics hubs in other regions.

Where next?
Wang explained that China needs to nurture its city clusters and complexes, and make sure there is a strong road and sea infrastructure. In the past China has almost solely connected with the rest of the world through ocean routes, but now it hopes to connect by rail through the western part of China.. "We hope to solve some of the problems with unbalance in China so we can conduct more fruitful industrial collaboration," Wang said.

China's waterways won't go unnoticed though. The River Delta contains more than 40% of China's economy, so developing that would help to develop other regions in China to grow too.

Another way to improve the balance in China's logistics development would be to pursue a multi-modal strategy. This would help to connect industries across different regions, as well as boosting logistics efficiency.

The One Belt, One Road strategy is one way for China to achieve this, but Wang was also concerned about international standards. "Is it possible for China going abroad, that we can set new rules and regulations within logistics so that we can be more compatible with international standards? Otherwise we will encounter setbacks when trying to work abroad. We should not be merely transportation companies – we should focus on the comprehensive logistics network and adapt to the international market."

Wang said that China needed to integrate rail, water, and air, and develop an efficient network across regions and cities. It also needed to create an integrated web-based logistics system to support the development of the new economy; and develop a logistics hub.

For more on the Automotive Logistics China Conference including the full report, click here.

To see video recordings of some of the event's main sessions, click here.