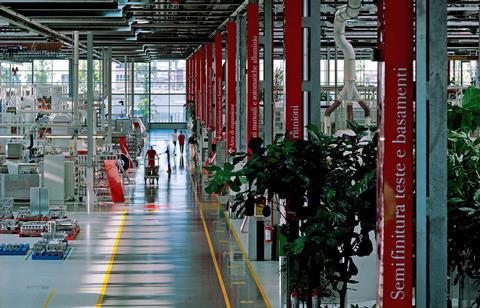 The sharp increase in the number of coronavirus cases in Italy has led the government to extend strict quarantine measures to the whole country. The restrictions are the toughest outside of China and affect 60m people, but still allow people to travel for work, meaning assembly and supplier facilities are currently still operating.

However, the situation is changing rapidly and automotive companies across Italy are reviewing production, supply and logistics contingencies on a daily basis. Not least Fiat Chrysler Automobiles (FCA), which this week announced it will be temporarily closing certain plants.

The northern region of Italy is heavily manufacturing based and more than half of that manufacturing (53%) is automotive. FCA is reported to be closing plants in Pomigliano d’Arco, Melfi, Atessa and Cassino, and said it was doing so to put in “all possible measures to minimise the risk of contagion among workers”. It also said that daily production would be reduced with less staffing in the main work areas, meaning volume output will be down in the coming weeks.

Other carmaker facilities in proximity include the Ferrari plant in Maranello (pictured), and Iveco has two assembly facilities, in Suzzara and Brescia, and an engine plant in Turin. Lamborghini, meanwhile, makes vehicles and engines in Sant’Agata north of Bologna, also in the north, though all of these vehicle makers have reported “operational continuity” this week.

The northern region of Italy is also home to a number of tier one parts suppliers on which carmakers in Italy and wider Europe depend. As reported last week, parts maker MTA, which supplies a number of European carmakers with fuse boxes, including FCA, Groupe PSA and Renault, was forced to close its Codogno production plant for a number of days last week in compliance with Italian health regulations. Brembo, Marelli and Pirelli are amongst the other major suppliers based in a region where economic activity has been affected since February 21.

“Similar to the situation in South Korea, Italian authorities have sealed off several towns in the regions of Lombardy and Veneto after multiple cases of the Covid-19 virus were confirmed on February 21,” said logistics provider DHL in its latest Resilience360 report (released prior to Monday’s extension of the quarantine). Resilience360 is DHL’s cloud-based platform that helps companies visualise, track and protect shipments and business operations. In its latest report published last week DHL added that the government-mandated lockdowns and intensified quarantine efforts were disrupting activities at the production and logistics operations in the affected cities and regions.

Securing the supply chain
Carmakers and suppliers have been mixed in their responses. Along with its latest statement on temporary closures, FCA said it was taking action in all areas of its operations in Italy to maintain its business continuity.

“The group has put into place extensive preventative measures to secure continuity of its supply chain,” said the company earlier this week but would not provide any further details of those measures.

Last month FCA was forced to halt production at its Serbian plant in Kragujevac, where it makes the Fiat 500L, because of shortages of parts from China, also caused by the Corvid 19 coronavirus.

Lamborghini acknowledged the “unprecedented measure” of limiting movement within Italy as a necessary measure to contain the spread of the virus but said it was too early to give a detailed forecast of the impact the situation would have on its business. The Sant’Agata Bolognese plant is currently in operation and a spokesperson for the company said that it was scrutinising the management of operational security both within the plant and externally.

Ferrari, likewise, confirmed “operational continuity” though it said that was subject to its suppliers and it was maintaining close contact with them.

Brembo, which supplies braking systems to Ferrari and a number of other carmakers in Europe and overseas, was also maintaining production at its three manufacturing locations in the north of Italy, though it added that “the global automotive market scenario continue[d] to be marked by a high degree of uncertainty and volatility, and a rather limited level of visibility” because of the economic impact coronavirus and “current major changes in automotive industry”.

Tyre maker Pirelli also reported that there was so far no impact on production in Italy with road transport allowed to and from “reinforced containment areas”. The company said it was receiving instruction in real time to best manage production and supply logistics.

Truckmaker Iveco said that all of its production sites were running according to plan at the moment, again adding that it was monitoring the situation very closely from a supplier perspective.

Planning and precautions
The majority of logistics providers are refusing to comment on the impact of the coronavirus on supply chains within Italy and wider Europe. DHL Supply Chain, which has provided detailed information for the sector through its Resilience360 special report, said it was hard to judge how strong the impact of the coronavirus would be at this point and was not disclosing information about its own shipment volumes in and out of Italy. The company would only say that its business continuity planning was managing to maintain operations for customers.

DB Schenker said that business operations in Italy were not restricted for the time being. “The regulations from authorities in parts of the country do not impact our transportation of goods,” said a spokesperson, but added that DB Schenker was “in continuous exchange with all relevant authorities and [had] implemented precautionary measures to support the further spread of the coronavirus.”

The impact of the coronavirus (combined with the recent fall in oil prices) has hit the stock market this week and led to declines the like of which have not been seen since the recession of 2008. The main financial indexes in the US and Europe closed down by more than 7% wiping billions off the value of companies before partially recovering on Tuesday, however, the continued economic impact of the coronavirus is a cause for concern across the industry.

This story was updated on March 11th with updates on FCA plant closures.