Automotive plants in Russia are reported to be running out of components as supply shortages caused by the coronavirus continue out of China and South Korea, and disruption spreads across Europe. 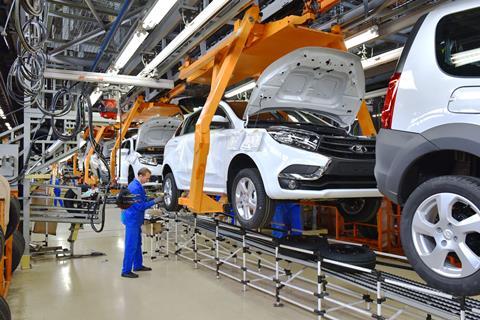 Russian carmaker Avtotor said its production may need to be adjusted in the coming months because of supplier closures in South Korea. The company is assembling Kia, Hyundai and BMW models at its plant in Kaliningrad and was aiming to maintain output at 210,000 to 212,000 finished vehicles in 2020.

Rival Russian carmaker, Avtovaz, reported that one of its workers has been found infected with the coronavirus. In a statement posted on March 17, Avtovaz said that the infected employee was identified early, adding that his colleagues tested negative for Covid-19. In light of this, Avtovaz announced that it was carrying out enhanced cleaning and disinfection at all production facilities.

Avtovaz is already facing component shortages because of the situation in China, said Vyacheslav Maleev, chairman of the industry committee of the regional parliament of Samara Oblast. The first tier suppliers in the region are facing similar problems because of disruption to the import of sub-components. Supplies have been stopped but not completely, Maleev said, adding that the problems are similar to those the European automotive industry is currently experiencing.

That said, some Chinese suppliers have already resumed operations, so they are likely to begin exporting automotive components soon, according to Ruslan Gainetdinov, chairman of the Industry Development Corporation of the Ulyanovsk Oblast. Now, however, there are problems with supplies from Italy and Germany, which are the main suppliers of automotive components on the Russian market, Gainetdinov said, adding that Russian companies have stocks to last for 20 to 30 days.

Expensive components
Along with the supply problems caused by the coronavirus, Russian carmakers are also experiencing difficulties because the Russian ruble has hit a four-year low against the US dollar and oil prices crashed 30% overnight. The Ruble began dropping in early March as the outbreak of the coronavirus in Europe gained momentum. On March 16, the exchange rate plummeted by 9.5%, which was the biggest one-day slump since 2015.

The drop in the exchange rate will take its toll on supplier production costs in Russia, said Sergey Udalov, executive director of the Russian think tank Avtostat. It also threatens to provoke a price hike on the Russian finished vehicle market, currently estimated to be around 10%, as every automotive plant in Russia imports components, Udalov said.

Avtovaz and Kamaz could benefit from that situation because they are importing fewer components than others, Udalov added.

The rising prices and increasing economic uncertainty caused by the coronavirus are likely to hamper the demand for finished vehicles on the Russian market, added Vladimir Bespalov, senior analyst of the Russian consulting agency VTB Capital.

As of March 19, Russia officially reported 199 cases of the new coronavirus. On the previous day its first coronavirus-related death was reported, a 79-year-old woman who had pre-existing health conditions. In almost all cases the people were infected while travelling abroad declared Russian authorities. Russian state sanitary service Rospotrebnadzor said that so far coronavirus has not been circulating inside Russia.