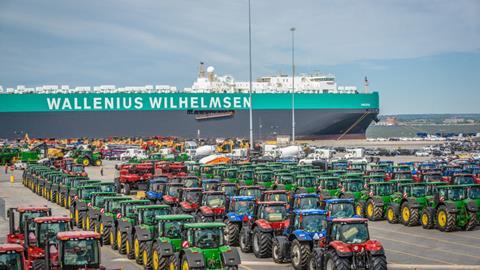 The Covid-19 pandemic has hit demand for maritime car carrying services to Russia from Europe by as much as 40%, according to Dmitry Vostrikov, general director of the Russian branch of Wallenius Wilhelmsen Ocean’s (WWO). However, Vostrikov said WWO had seen little impact because of a recovery in volumes out of Asia, the main source of supply to the Russian market, and a diversification in the sort of rolling cargo it handles.

“When it comes to the Russian market, we see a strong decrease in imports of finished vehicles from Europe,” he said. “The production halts at many plants impaired operations of European feeder lines, which have had to cut the number of port calls and adjust the schedules of their flights.”

However, high and heavy cargoes such as construction and agricultural machinery, as well as trucks and buses have continued as normal and these are cargoes that WWO’s vessels are able to mix with normal passenger cars. Therefore, WWO has diversified its order book and switched to transport of different cargoes, including high and heavy units and breakbulk cargoes.

“Surprisingly, those segments have not shown a major reduction in supply volumes during the coronavirus pandemic, and we even evidenced some growth in certain directions,” Vostrikov added.

Outbound volumes level
At the same time, Russian finished vehicle exports have not been badly affected by the pandemic. According to Vostrikov, the supply volumes in the outbound logistics segment are comparable with those of last year, though figures for April and May are yet to be assessed.

The Russian Federal Customs Service reports that in the first quarter of the year vehicles imported to Russia were down 15% year-on-year to 52,200 units, while exports over the same period were down 26% to 16,800. However, the majority of losses in export trade were to neighbouring post-Soviet countries, which have been experiencing falling sales, while supplies to markets further afield have remained level.

The Russian government expects that negative export sales in the first quarter will be compensated for by a recovery in the second half of the year, according to Vasily Osmakov, deputy Russian Industry and Trade Minister.

However, WWO’s Vostrikov said that recovery on the global ro-ro market is not going to be as fast and that its pace would depend on numerous factors, including the withdrawal of the quarantine restrictions in various countries and the return of the purchasing power amongst the populations back to pre-crisis levels. Other factors include fully restored car production and the prospect of a second wave of Covid-19 infections.