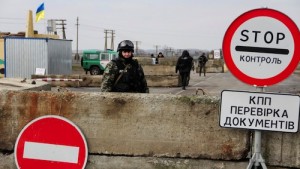 The car market in Crimea is facing collapse because of an economic blockade that has completely closed the supply of vehicles and service parts to the troubled area.

Supply lines to dealers in Crimea, which already have depleted stocks, stopped on April 22 (Tuesday) and the situation is worsening the prospects for the local market, according to Ukrainian officials and market players.

"At the moment, we face very sharp negative situation in the local automotive market of Crimea,” said Mikhail Smolyanov, deputy of the State Council of Crimea and president of the Avtodel dealer group. “The recent actions [around the peninsula] have provoked not only stagnation but also a full stop of the automotive business in the Crimea and Sevastopol. The supply of the vehicles and spare parts from importers of Ukraine stopped while many automobile enterprises of Crimea and Sevastopol closed, workers sent on leave without pay," he said.

According to Smolyanov, Crimean dealer inventories are now at zero, and because of the lack of sufficient transport infrastructure Russia has failed to replace it.

Supply of vehicles to the Crimean car market is further undermined because global automakers intend to prohibit the import of their cars there, according to Gennady Pristrom, CEO of international automobile holding Atlant-M Ukraine.

"This is not just a rumor,” he said. “This option is really currently being discussed by manufacturers. The probability that a ban on the supply of vehicles to Crimea will be introduced is about 90%.” According to Pristrom, if all the proposed actions are implemented Crimea will become the largest “shadow” market in Europe.

More immediately it means the closure of automotive related businesses and the unemployment of thousands of people.

Aftermarket services in the region could also soon be withdrawn because major US, European and Japanese carmakers have already refused to provide spare parts supply, according to the information provided by the All-Ukrainian Association of Automobile Importers and Dealers.

At the same time the future of Bogdan Auto in Simferopol remains unclear. Simferopol is one of Crimea’s main cities and part of Bogdan’s distribution network in Ukraine. At the end of March it was seized by armed men and the heads of Bogdan have been unable to negotiate for its release.

So far the representatives of most carmakers in Ukraine have refrained from commenting on the situation, only stating that customers can order cars with 100% advance payment, but the purchaser will have to take car in Kherson and Nikolayev, Ukraine’s largest nearby cities.

Crimea accounts for about 5% of the total Ukraine car market. During recent months, the volume of car sales on the peninsula amounted to 600-1,000 units per month; the average volume of the market was about 10,000 cars per year.