Crossdocking: the art of movement

Viewed as a production function rather than a warehouse, well managed crossdocks can be a profitable marketing tool. However, poor use can stunt growth and drain profits 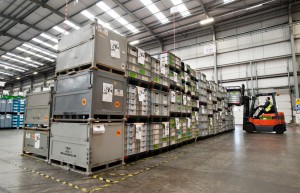 Now majority-owned by Russian Railways, logistics specialist Gefco is hitting the expansion trail. Gefco senior management used the company’s annual results, published in late April, to openly declare their ambition to parlay Gefco’s expertise in automotive logistics into a proposition to win work in other industrial markets and regions of the world.

The operator of Europe’s largest private sector transport network, Gefco already works for some of the biggest names in automotive – and in virtually every case, its inbound logistics support for these manufacturers involves the provision of crossdock operations as well as transport. Which isn’t surprising, of course; beginning in the 1980s and 1990s, crossdocks have become the automotive industry’s standard means of reconciling the conflicting demands of just-in-time production and low-cost transport processes.

But look closely at Gefco’s pan-European network of 150 or so crossdocks and you’ll see something unusual in the world of automotive. These facilities are being used not just to support the operations of a single manufacturer – or even multiple automotive companies – but are made available to any company requiring crossdock capacity.

“Our crossdocks have always been shared,” says Emmanuel Arnaud, Gefco sales director. “Sharing crossdocks, not just between carmakers and tier ones, but with manufacturers and distributors from any industry, makes sense, because adding value and sharing the network improves productivity and utilisation.”

The trick, he adds, is to design flexibility into the crossdock, then strive to maximise the utilisation of crossdock capacity. Doing this increases the profitability of the facility while at the same time saving money for manufacturers using it.

Routinely, explains Arnaud, a crossdock will work a 24-hour cycle, with each door and each square metre of space serving several customers or several freight lanes across that cycle. A freight door might be used for feeding assembly plants during daylight hours, for instance, and aftermarket inventory replenishment at night – or, for that matter, the logistics and distribution requirements of any company with goods to shift and where a move to a shared crossdock would add value by improving productivity and utilisation.

“A door might be used for incoming freight for eight hours, and then re-used for outgoing shipments,” he says. “Over the 24-hour cycle, it could be used by several customers.”

Blended in with this flexibility, the crossdocks often have islands of dedicated operation, continually used to support the operations of a specific customer, whether on a 12-hour or a 24-hour basis.

Where customer requirements dictate, the associated crossdock personnel are dedicated to those customer requirements as well. In the case of Toyota’s European operations, for instance, Gefco provides both 12-hour and 24-hour dedicated crossdock space, both staffed with people fully trained in the Toyota quality system as well as the specific logistics procedures of the plant they are feeding. 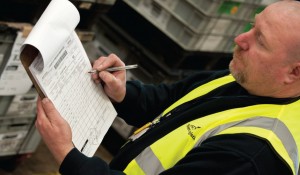 Gefco provides a lesson in how seemingly humdrum aspects of crossdock and warehouse management can be deployed strategically to make a discernible difference in operating efficiencies, customer service, and competitive edge.

Writ large, it’s a story with echoes in many of the automotive industry’s other major logistics service services. While not in every instance will efficient crossdock management be found in use as a strategic marketing tool, every automotive logistics provider is all too aware that inefficient crossdock management is a strategic liability, hampering growth and serving as a drain on profits.

So in today’s automotive logistics environment, with demands on efficiency so strong, what counts as best practice in crossdock management?

Certainly, good operations in crossdock management is not necessarily the same as good warehouse management. As at Gefco, where floor space and loading bay doors are routinely re-purposed every few hours, the name of the game is most certainly not those traditional warehousing skillsets of high-density storage, slick putaway operations and efficient and timely picking.

Automotive logistics executives say that the management methods and metrics on which they rely are far more akin to production management than conventional warehouse management, in particular considering the crossdock’s role of keeping parts moving, rather than attempting to consolidate them to improve handling costs. It’s often a skillful balancing act, albeit one that can be mastered.

At Jaguar Land Rover, for instance, inbound logistics manager Al Jeory keeps a sharp eye on the trucks shuttling between the company’s two crossdocks charged with direct supply to the assembly lines – one on Merseyside, feeding Jaguar Land Rover’s Halewood assembly plant and one at Hams Hall in the West Midlands, feeding the Solihull and Castle Bromwich plants.

“We try to avoid trucks travelling round plants from dock to dock, delivering small quantities,” he says. “[You should] aim to minimise offloading time and dwell time at the plant – you don’t want trucks to spend their time waiting to unload two boxes at a dock before driving off to wait at the next dock to unload another two boxes.”

Speed and flow feature prominently in the crossdock management metrics advocated by Edwin van Woudenberg, European business development manager for automotive at Vos Logistics. “It’s important that goods are on the floor for as short a time as possible – so measure that time,” he says. “Measure the time taken loading and unloading. Measure dwell time at the crossdock and make sure that the physical flow from the incoming arrival to the outgoing departure is as efficient as it can be made.”

On-time delivery is another facet of efficient crossdock operation, especially when that crossdock is fed by a complex chain of feeder networks. At tier one suppler Visteon, where Visteon crossdock management is partnered with a US-wide collection and delivery service operated by logistics service provider ProTrans International, Visteon corporate logistics manager Bill Pfeiffer places a high reliance on on-time delivery performance.

“Primarily, we look at on-time delivery from the point of collection at the supplier right through to delivery to the plant,” he relates. “For us, that’s the metric that matters. Did ProTrans pick up on time? Did they get the shipment to the crossdock on time? And did it get to the ultimate destination on time?” 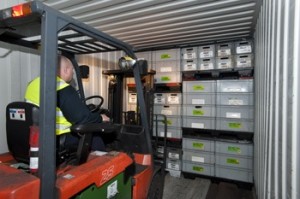 With a strict definition of ‘on time’ under which a 6.00pm delivery slot is regarded as late if fulfilled at 6.01pm, current performance is running at 98%, reports Pfeiffer.

That said, the need for timely logistics must be balanced against opportunities to reduce costs and improve efficiencies. A prime target is poorly loaded vehicles, a particular bugbear in the automotive industry, where cargoes of standard pallets and returnable boxes must be combined with non-standard specialist packaging for particular parts.

“Whatever the load, it’s important to have everything packed together intelligently so as to maximise vehicle cubic utilisation in order to minimise truckloads and vehicle mileage,” says Jaguar Land Rover’s Jeory.

Damage levels are another metric closely monitored by Visteon’s Pfeiffer, who notes that efficiencies in inbound transport brought about by load consolidation and network sharing typically serve to increase the number of handling points in the journey of a given shipment of parts – with each additional handling point adding to the risk of damage.

Fascinating though these insights are, it’s difficult to escape the conclusion that these are piecemeal approaches, rooted in an individual company’s own experiences and approaches to management. Nor is there much evidence of crossdock management – as described at Gefco – being used strategically, to enhance competitive edge.

At Yusen Logistics, controlled by Japan’s NYK Group, a European initiative has seen NYK’s own Japanese-originated NYK Way supplanted by a custom-designed attempt to create a linked series of approaches applicable to logistics and crossdock management.

“The idea behind the Yusen Excellence System (YES) is to incorporate the best – or most appropriate – methods and processes from manufacturing methodologies such as the Toyota Production System,” explains John Pursey, business unit director at Yusen Logistics. “Quite deliberately, the intention has been to put in place processes and systems to engage the entire business, not just in the warehouse or crossdock, but in back office and support functions as well.”

"The YES system puts in place processes and systems to engage the entire business, not just in the warehouse or crossdock, but in back office and support functions as well" – John Pursey, Yusen Logistics

Those familiar with the Toyota Production System and lean production in general will find much that is familiar: ‘Plan, Do, Check, Act’, for instance; standard work configurations; protocols for tackling the three classic ‘lean’ types of waste (Mura, Muri and Muda in Japanese); 5-S workplace configuration; ‘visual factory’ approaches; and kaizen-based improvement techniques.

That said, there’s a difference between how such techniques are used in manufacturing and how they are used in a logistics environment, adds John Mackereth, a Yusen process engineer, and ex-Toyota employee who helped to develop YES. “You can’t just say ‘this is automotive best practice’ and assume that it’s also going to be best practice in logistics as well,” he says. “That doesn’t necessarily hold true and can conceivably be a mistake.”

The way that the techniques underpinning YES have been adapted to logistics is impressive. ‘Visual factory’ approaches, for instance, see truck layouts painted on crossdock floors, so that any overspill during consolidation for loading can instantly be seen. In multi-user environments, different floor colours denote areas for different customers, while TV monitors display progress against the day’s planned workload so that supervisors can see, at a glance, if activities are running to schedule.

The system is in use business-wide, stresses Mackereth. There’s nothing to stop any manager or supervisor from any Yusen site exchanging roles with an equivalent from another site and performing a seamless switch. Different sites and different contracts may have different levels of maturity depending on how long Yusen has operated the given end-customer contract, but the underlying fundamentals are the same.

In an echo of Gefco, it’s this business-wide adoption of YES that is its strategic strength, sums up Pursey. “Do we see YES as a competitive differentiator? Absolutely,” he says. “It enables us to not only demonstrate how we will deliver the contract, but also how we will deliver improvements in quality, cost and safety. Competitors talk about being lean but we actually have a framework for delivering and demonstrating a lean approach. In today’s business environment, with its focus on ‘cost down’, and gain-sharing, a proven system for delivering improvement is a huge advantage.YES is how we deliver it.”