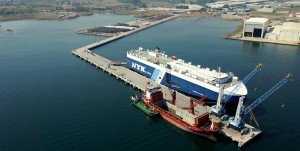 Exports of Turkish manufactured vehicles rose by 8% in August this year, reaching $1.36 billion, which is the best August result to be posted since the 2008 global financial crisis began to bite.

Nevertheless, for the first eight months overall, exports are reported down 10%, according to Orhan Sabuncu, the chairman of the Uluda? Automotive Industry Exporters' Union (O?B).

Furthermore, the January – August 2015 period produced losses of $2.1 billion, which Sabuncu attributed to unfavourable foreign exchange rates. As a result, revenue generated from overseas sales for the first eight months went down to $13.5 billion. Despite this, August produced some encouraging results, with increased exports to six of Turkey's eight largest trade partners.

The main problem is that Turkish companies are invariably forced to make payment for intermediate goods in US dollars, although they receive payment in euros. This has been particularly debilitating given that the US dollar continues to gain value not only against the euro, but also compared to emerging market currencies thanks to the economic recovery in the US.

There were also some significant differences in the value of exported vehicles amongst Turkey's main trading partners during August.