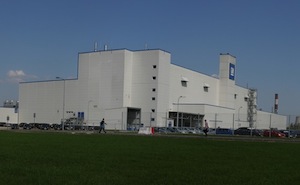 Russian authorities are in negotiation with Daimler executives over the possible launch of Mercedes-Benz production near St Petersburg, according to George Poltavchenko, the regional governor. The OEM could takeover GM’s plant there, with the federal government suggesting it is keen to transfer GM’s agreement on industrial assembly to Daimler.

“Negotiations with Daimler are currently taking place. They have not abandoned the idea to launch production in St Petersburg,” Poltavchenko said. “I do not want to reveal specific details yet, but we have advised them to look into the [former] GM premises. At the very least, negotiations are continuing.”

GM stopped production of vehicles at its St Petersburg plant in June last year because of continued economic problems in the country and a subsequent drop in sales.

A spokesperson from the Russian division of Daimler refused to comment on the issue but, according to sources at the company, it is currently considering the assembly of models from the S, E, GL, ML, and A categories.

Poltavchenko said production would only proceed at the plant with an immediate 35% localisation level for parts sourcing and that economic privileges were not on offer, other than a zero customs duty on imported components; without the agreement, duty costs will be around 20-25%.

“Special preferences, which the city may have offered five or ten years ago, will not be provided now. It is nice to have a partner [such as Daimler], but not to the detriment of the city, which has already developed a strong automotive cluster,” Poltavchenko added.

Russian authorities have had the Daimler proposal on the table since the beginning of 2015 and maintain that there will be no new contract with the OEM because it already contains the best terms. However, it is not clear whether the deal is attractive to Daimler given it would have to set a localisation level of 35% this year and bring it to above 50% by 2018.

“In theory, Mercedes may benefit from using GM’s supply chain in the region, importing components with the use of former logistics partners of US OEMs, and delivering finished vehicles across the country with the help of its internal partners,” said Eugene Borodin, spokesperson for the Department for Tariffs.

Some experts have suggested that Mercedes should consider localising car assembly in Russia, after the government banned purchasing imported cars for state bodies. As a result of this ruling, Mercedes lost a significant part of its sales, which previously went to officials, public organisations and government agencies. Launching the