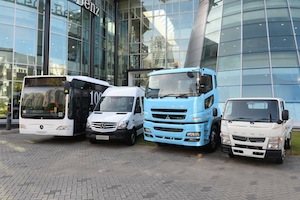 Daimler has opened a regional centre in Singapore for commercial vehicle sales and services to 18 countries across the South Asia region. The Daimler South East Asia (DSEA) facility will support the sales and aftermarket demands for both Mercedes-Benz trucks, buses and vans and Fuso trucks and buses.

"In South East Asia we sold more than 40,000 commercial vehicles in the past year,” stated Dr Wolfgang Bernhard, member of the board of management at Daimler, with responsibility for Daimler Trucks and Buses. “That illustrates how important this region is for us already. [T]hat importance will increase within the coming years […] and we are determined to participate considerably in this growth. That is the clear objective of our new regional centre.”

Daimler said that Singapore was the central transport and logistics hub for the region, having one of the best airports in the region and the second largest container port in the world.

Daimler operates six CKD assembly plants for commercial vehicles in the South East Asean region: one in Indonesia, in Malaysia, in Thailand, in Vietnam and two facilities in Taiwan.

Daimler used the opening of the DSEA facility to hand over the 1000th Mercedes-Benz Citaro urban bus to its long running customer in Singapore, SBS Transit.