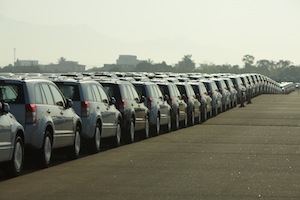 What are currently five independent areas are being bundled together to form a single concession, where both ro-ro and general cargo handling will be authorised. However, Deicmar claims that terms and conditions are such that the only practical application of the proposed terminal would be one handling purely containers, since new vehicle handling would be unprofitable.

According to Deicmar, if terms and conditions are not amended, finished vehicles handling in the port will become the effective monopoly of TEV, the largest such terminal in the country, belonging to the Santos Brasil group. This is disputed by Santos Brasil, which pointed to the fact that the concessionaire will have to handle a statutory minimum of 104,000 vehicles annually, with up to 42.3% of the terminal given over to either ro-ro traffic or general cargo.

The new concession is of particular interest to Deicmar, which already operates a similar sized mixed new vehicles and non-containerised general cargo terminal in the Saboó area of the port. However, its concession is about to expire, prompting it to seriously consider bidding for the new development area on offer. It currently handles around 200,000 new vehicles per year.

The winner of the new concession will simply have to offer the cheapest stevedoring and wharfage rates. The concession, which will expire within ten years, is estimated to generate total revenue of $544m. However, Gerson Foratto, Deicmar director, pointed out that, in the first two years of the contract, there will be a negative cash flow of $20m, since no container handling will be allowed in that period. Revenue improvement will only begin in 2016 when part of the site will be permitted to handle containers at non-discounted rates.

“In order to win the tender, bargain prices will have to be offered as a means of cross-subsidising traffic,” said Foratto, meaning that what is on offer is really a container terminal masquerading as a mixed traffic terminal that includes new vehicles.

The permitted vessel size will also be too small to effectively accommodate large ro-ro vessels, he added.

"The port already has overcapacity in terms of containers, while ro-ro traffic is under-catered for,” said Mr Foratto.