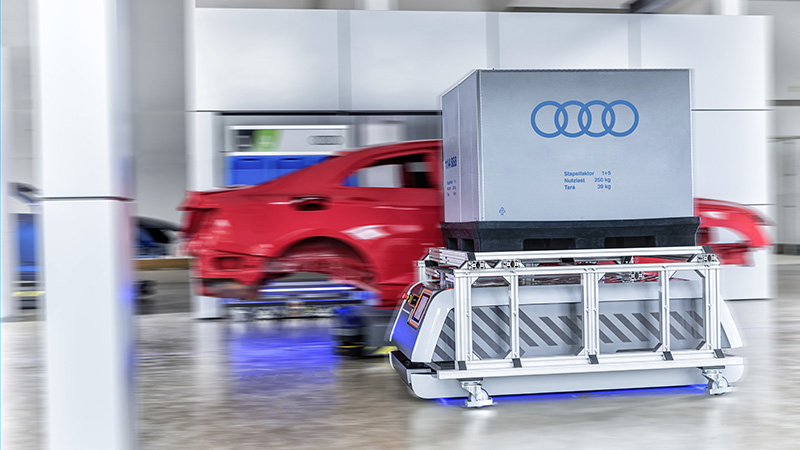 The headline above might well have read ‘industry and logistics 4.0’, ‘the industrial internet of things’, ‘factories of the future’, ‘smart supply chains’ or ‘manufacturing 2025’.

Or we might have turned to one of a growing number of acronyms used to outline the car industry’s future, like Mercedes-Benz Car’s CASE or PwC’s EASCY.

There are many names ascribed to the changes in technology impacting the automotive industry. These include increases in internet connectivity across both industrial and social economies, the rise of autonomous vehicles, artificial intelligence, advanced automation, the sweeping changes triggered by e-commerce, and the role of increasing electrification and alternative energy.

While there are regional, political and operational disparities across any of these topics, most are becoming central to the strategies of major automotive companies, with huge roles to play in production and logistics.

Huge investments continue to be made in the development of autonomous driving, both by traditional carmakers and suppliers, as well as new players and software companies. This is reshaping the supplier market, evident by Intel’s recent $15 billion acquisition of self-driving tech provider Mobileye, or Delphi hiving off its powertrain division this year to focus more on sensors and connected technology. Johnson Controls took a similar approach recently with its seating division.

Indeed, General Motors’ recent decisions to pull out of a number of unprofitable regions, from Europe to India, is in part an effort to concentrate investment on new technology.

Electro-mobility, while still a small share of sales, is attracting large capital investments and could reconfigure supply chain maps and vehicles’ component structures. Tesla is planning more lithium-ion ‘gigafactories’ in the US and beyond. A Daimler division has started work on a second lithium-ion battery pack centre in eastern Germany, which will quadruple production and logistics capacity there. Volkswagen Group is planning a battery centre in Salzgitter and more than 30 battery electric vehicles by 2025.

Connectivity and electrification could also reshape factories and logistics. Jim Bydalek, vice-president of digital for automotive and aerospace at consultancy Capgemini, and a speaker at the Supply Chain Conference in Atlanta this past May, anticipates changes in the nature of manufacturing, including modular plant designs and decentralised production control. “The supply chain needs to be connected; there are no outsiders any more,” he says.

Sven Dharmani, principal for advisory services at consultancy EY, predicts that a 50% drop in the cost of electric vehicles by 2025 will make their total price comparable to traditional ones. Meanwhile, the differences between electric vehicles and those with combustion engines could have a significant effect on logistics. Currently, combustion engines and transmissions consist of roughly 1,500 parts, compared with an electric motor of about 35 parts including the battery pack.

“So the logistics of how you put together the powertrain changes completely, and also where you get it from. Batteries are pretty heavy – you don’t really want to ship them overseas,” Dharmani says.

New plays, new playersThe changes are set to ripple through sales and distribution markets. E-commerce has already triggered a revolution in retail logistics. Scott Perry, chief technology and procurement officer for logistics provider Ryder, points to thousands of stores closing in the US as consumers shop more online, including once unassailable brands like CVS.

Perry suggests that e-commerce changes won’t spare automotive dealerships and distribution networks either, especially with a move towards car sharing or ride-hailing apps, as well as direct consumer orders for new vehicles and for service parts that could lead to non-dealer deliveries.

“We will have the same type of impacts in [the automotive] sector, whether through drones or other technology that will lead to bigger changes to the distribution network,” he says.

Carmakers are aware of such risks. Chief executives speak of transforming carmakers into providers of ‘mobility services’, with new relationships between OEMs, customers, dealers and third parties across the supply chain. Toyota and GM have invested in ride-hailing apps Uber and Lyft, while Volkswagen Group has backed taxi app Gett.

Even the wheel is being reinvented. At Pirelli Tire North America, John Godfrey, vice-president of logistics for Nafta, says the company’s ‘connected’ tyres will communicate data about usage, wear and replacement to car owners, and could help Pirelli plan production and supply for the aftermarket.

The digital shake-up is not just among manufacturers or dealers. Silicon Valley’s broader interest in transport has made a clear leap to freight and logistics, too. Uber has ventures in both autonomous trucks and moving cargo; technologies such as drones, smart glasses and virtual reality are increasingly finding their way into warehouses, yards and other logistics operations or training facilities.

What’s more, digital startups are creeping more clearly into the logistics market, whether in online freight forwarding, paperless documents, billing or tracking. Such firms may offer opportunities for established providers in terms of new systems and software, or as potential acquisitions. They will also challenge logistics companies directly in some areas.

Manufacturers themselves are partly encouraging this. Volkswagen Group’s commercial vehicle division has launched a new in-cab telematics system, Rio, designed to connect truck fleets to available cargo flows. Some OEMs, such as MAN and AGCO, meanwhile, are using digital platforms to arrange return loads from their factories to others. The barriers that previously existed between shippers, suppliers and logistics providers are coming down – in some cases, very quickly.

Who to follow?Will such technology lead to a new order for the automotive supply chain and logistics sectors? Studies on the impacts of digitalisation and advanced automation on jobs, both in production and logistics, often make for grim reading. Meanwhile, venture capitalists making big bets on disruptive technology may be a worry for traditional firms already struggling on low margins, unable to afford to upgrade legacy IT systems or take risks on new types of technology or business models.

Ryder’s Scott Perry points out that digital startups in logistics and vehicle manufacturing are often uninterested in the 30-year relationships and networks that logistics providers and traditional OEMs have established.

Meanwhile, the likes of BMW, Audi, PSA and Porsche have developed visions for future manufacturing systems built around modular, self-driving production systems. In such scenarios, the changes for logistics are notable, both for eliminating areas for parts kitting and sequencing, and for automating line feeding and material handling.

Talk of disruption is popular. That is demonstrable not only in boardroom strategies, but also technology stocks – witness the value of Tesla or Amazon over the comparatively dour outlook investors take on traditional carmakers. The ousting of Ford’s Mark Fields shows the pressure at the executive level.

[related_topics align="right" border="yes"] However, many changes in automotive logistics currently still appear to be more evolutionary than revolutionary.

For example, the time it will take carmakers to build and sell vehicles with full levels of autonomy remains uncertain, both for technological and regulatory reasons. The shift to car sharing or mobility as a service may take decades to impact vehicle sales and production. And in factories, there is little expectation that existing assembly lines and supply chains will be wholly modularised and automated anytime soon.

Supply chain executives instead talk about practical advances. Manufacturers and technology firms are looking at new tracking and monitoring methods for packaging. At Volkswagen Group, one of the most important developments for cross-company logistics is an improved system to automate and transmit shipping notifications and pickups. At Subaru’s plant in the US, a transport management system has replaced spreadsheets in determining trucking frequencies and routes. And for service parts, carmakers are looking for ways to expand dealer deliveries without taking business away from them.

Such developments may qualify more as industry 3.0 than 4.0, or somewhere inbetween. In any case, such jargon may be more de rigueur among consultants and futurists, while logistics executives prefer the safety of being ‘fast followers’.

That might be the best approach for many. However, those without a strategy to keep up with the myriad changes facing the automotive supply chain and those who don’t allow room to invest or experiment in new ideas, or to develop new technology and talent in their organisations, may also end up following others into irrelevance.