Artificial intelligence (AI) is playing an increasing role in the logistical aspects of production at BMW’s plants, with the first smart AI control application making its debut at the Steyr engine factory in Austria. 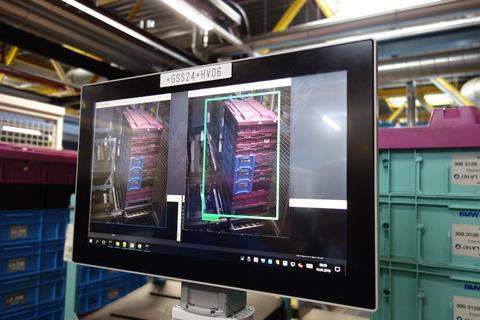 BMW is using a camera station at Steyr to identify whether a container needs to be lashed onto a pallet or not, saving time on conveyor routing

After planning and preparation, testing started in February this year and only a month later was integrated into series production, a company spokesman told Automotive Logistics.

In this case, the use of AI speeds up logistics processes by preventing unnecessary transport on conveyor belts of empty containers.

They pass through a camera station where the application recognises whether the container needs to be lashed onto a pallet or, as with large, stable boxes, no additional securing is required. If none is needed, the AI application directs a container by the shortest route to the removal station for the forklift truck. Containers that must be additionally secured are guided directly to the lashing system before reaching the removal station.

Previously, all containers had to be transported to the removal station for large containers. Those which required additional securing had to be forwarded from there and would only reach the correct removal station after taking a detour via the lashing unit.

Besides the application in Steyr, BMW said AI is behind numerous other logistics innovations across the group such as virtual layout planning, which creates high-resolution 3D scans of objects and buildings.

“This allows engineers to remove individual objects from the 3D scan in the 3D planning software and to modify these individually, which makes it easier to simulate and understand adaptations on the shop floor,” the company said.

The spokesman added: “Virtual layout planning is based on real structures. It is a very flexible approach and easily adaptable for changes.”

Planning and other teams can work closely and simultaneously together, setting up virtual planning meetings with employees from different sites.

“Facilities, transport systems and other structural elements can be planned upon real data. A big advantage is that when planning, various scenarios can easily be assessed without additional costs,” he said.

The German group is also employing AI in its logistics robots, autonomous transport systems and planning tools, such as smart planning. Chatbots have been created to help employees get the information they are looking for in the fastest way possible, and computer vision will be used by logistics robots for picking and sorting processes.

On the production side, an AI application used in series production is automated image recognition to evaluate pictures of components to determine deviations from the standard, such as whether all required parts have been mounted in the right place.