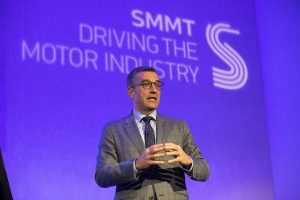 Toyota is garnering telematics data every ten seconds from the 9m vehicles it produces annually to transform itself into a future mobility services provider still relevant to a vehicle market undergoing some seismic changes.

Developments in connected and autonomous technology have made the term ‘carmaker’ too narrow. Companies are now positioning themselves to provide a range of technologies to customers who are as interested in the services they can access while in a vehicle as they are in the drive itself. And they are doing so conscious of the fact that outside players such as Google, Apple and Dyson are waiting in the wings to gain ground on them if they do not.

Speaking at last week’s SMMT Connected conference in London, Agustin Martin, CEO of Toyota Connected Europe (pictured), said there was going to be a huge difference in what carmakers did moving forward and that they would be up against rivals from outside the automotive industry eager to tap into the potential in the connected and autonomous vehicle (CAV) market.

“This change is not just there for the so-called incumbent players in the industry,” said Martin. “The huge difference that we see moving forward is that there are many other players that have other skills and capabilities compared to the ones we have that can also tap into the [market] potential. If you want to remain relevant, you need to remain conscious about this.”

Martin had some facts to back up the change. He said that 94% of the €502 billion automotive revenue pool in Europe in 2017 came from vehicle sales, with only 6% then accounted for by connected or mobility services. By contrast he said that by 2030 the market would be worth €643 billion with 37% of that revenue coming from connected and mobility services.

There are three main factors contingent on this shift in the market, according to Martin. One is that the customer is no longer necessarily concerned about owning a vehicle and is open to other models of use. Another is that cities are reinventing themselves as spaces of living and interaction, which has repercussions for car companies who want to remain relevant. Thirdly, technology has developed at an exponential rate to help solve the needs that the consumer (or producer) in ways that were considered impossible yesterday.

“The combination of these three things is driving a change in customer expectations, [they] are looking for an experience that is connected, seamless, on-demand and as personalised as can be,” Martin recognised.

As far in-car technology goes, Martin said Toyota Connected Europe was leading developments in telematics and big data as part of that mission to create seamless mobility services for the customer. He said that transformation was why the Toyota Connected was set up in 2000 in Japan, but significantly for the UK the European division is based in London. That, he continued, was because of the rich pool of talent in data science, software development and financial technologies (fintech) there.

“You need to be where the talent is and you need to be next to where these other new companies are also building their centres of competence, so that you are part of that ecosystem,” he said.

Toyota is using that talent to analyse the huge amount of data that feeds into its global big data centres and turn it into useful information designed to provide customers, corporations and cities with services.

“Thanks to that ingestion of data and the analytics of it, we can create the Mobility Service Platform. That is an open architecture that enables in turn other services,” he said. “You can imagine the vast quantity of information that is going through the Toyota Big Data Centers across the world. Our ability to turn this data into insights and those insights into relevant services is what we are talking about.”