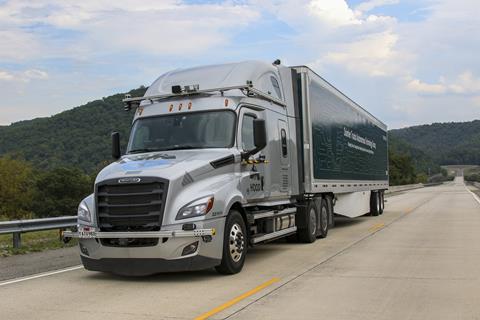 Daimler Trucks and its newly acquired business, Torc Robotics, which specialises in automated driving technology, have moved to the next stage of their autonomous truck trials in the US. The companies announced that they have been trying out automated lorries with Level 4 technology on highways in southwest Virginia, where Torc is headquartered.

The initial runs follow months of testing and safety validation on a closed-loop track. As defined by the Society of Automotive Engineers, Level 4 self-driving technology is just one stage below full autonomy. Torc’s system for automated driving, Asimov, has previously been tested on urban and long-distance routes as well as in rain, snow, fog and varying light conditions.

“Bringing Level 4 trucks to the public roads is a major step toward our goal to deliver reliable and safe trucks for the benefits of our customers, our economies and society,” said Martin Daum, member of the board of management of Daimler AG, responsible for trucks and buses.

The German group stressed that all automated runs at this stage of testing require both an engineer overseeing the system and a safety driver certified by Daimler Trucks and Torc Robotics. Those drivers hold a commercial driver’s license and are specially trained in vehicle dynamics and automated systems.

The announcement of the road trials comes after regulatory authorities approved Daimler Trucks’ acquisition of a majority stake in Torc Robotics. It is now part of the vehicle-maker’s newly established autonomous technology group, which is consolidating expertise and automated driving activities into a global organisation based in Blacksburg and Portland, US and Stuttgart, Germany.

Within Daimler Trucks North America (DTNA), the new group is building infrastructure, such as a main control centre and logistics hubs, required for operational testing of autonomous lorries. Those hubs are being located alongside roads with a high volume of lorries.

Among other projects, DTNA is developing a truck chassis suited to highly automated driving as it works on autonomous driving technology and vehicle integration for heavy-duty trucks.