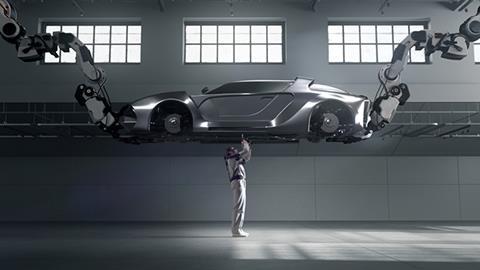 The Hyundai Motor Group has developed two wearable robots to assist production line employees. The innovations may also become a revenue stream for the group, which plans to commercialise its production.

Company engineers have created what they call a vest exoskeleton (vex), worn like a backpack and designed to help industrial workers who spend long hours working in overhead environments. Examples include bolting the underside of vehicles, fitting brake tubes and attaching exhausts.

In the vex’s development stage a pilot programme in two US production plants was so successful assisting workers and boosting productivity that both factories incorporated it into their assembly lines. The group is now considering introducing the device in its plants worldwide.

A vex is projected to cost as much as 30% less than existing products, which usually sell for around $5,000, and at 2.5kg weighs between 22% and 42% less than competing products, claims Hyundai.

The group says the wearable vest enhances productivity and reduces fatigue by imitating the movement of human joints to boost load support and mobility.

Hyundai’s engineers have also developed another lightweight wearable device, the chairless exoskeleton (cex) which enables workers to maintain a sitting position without a stool or chair. It reduces the user’s back and lower body muscle activity by 40%, lowers fatigue, improves efficiency, is light at 1.6kg, but is durable and able to withstand weights of up to 150kg, the group says. Cex will also soon be commercialised.