Barry Cross investigates how Mack Trucks distributes its vehicles and what advantages Volvo Logistics can offer over more asset-rich operations in North America.

In August 2008, the distribution of Mack Trucks underwent a radical revamp following two years of process re-assessment. Up to that point one carrier effectively had a monopoly on the movement of ex-production plant vehicles, explains Matthew Balazs, the North America director of Volvo Logistics responsible for outbound and risk management. In the new scheme of things, this activity is split between two different carriers, one of which would be responsible for individual truck movements (“singles”), while a second undertakes grouped deliveries, using the North American deck-set (“decking”) method, in which truck cabs are carried piggy-backed to each other. Balazs, who started working with Mack in 1999, recalls that the it was acquired by the Volvo Group in 2001, with Volvo Logistics (VL) assuming overall responsibility for outbound movements two years later. Up until then, VL had been essentially responsible for managing the carriers, who effectively looked after everything else themselves. Under the new setup, VL, which to all intents and purposes is a 4PL, assumed total process responsibility. “Now, we manage the outbound flow, the expectations from Mack and its customers, as well as get the vehicles to where they are needed,” says Balazs, who stresses that VL owns no physical assets and employs a staff of just ten people in North America.

A process built around lead times
Quizzed as to why VL had thought such a radical revamp necessary, Balazs explains that the previous carrier would roster equipment and assets in a way that would maximise overall productivity for themselves, although this would not necessarily reflect Mack Truck’s own baseline requirements. “Under the new arrangement, the process is based around lead times, which we agree with Mack in advance. These are broken down by ZIP code and are a function of the travel distance involved. The longer the distance, the more likely we are to use deck-sets, while shorter deliveries are invariably undertaken as singles,” he says, stressing that the revamp took substantial cost out of the whole logistics process.

Lead times, however, do not exactly match the number of driving days involved. This is because VL needs to group units 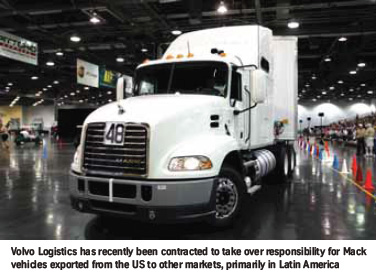 bound for certain geographical areas, which can mean ex-production vehicles may have to wait around in the yard prior to despatch, awaiting confirmation of other orders from that region involving similar models, since not all models of truck built by Mack can be decked together. A lead time of ten days might therefore be given for a particular ZIP code, although travelling time from the Mucungie plant in Pennsylvania could be just three days.

The challenge of ‘singles’
“This situation has been made significantly more challenging as a result of the recession,” concedes Balazs, who notes that fewer orders have resulted in more singles having to be considered if Mack is to get vehicles to some customers in a reasonable time frame. Some improvement has, however, been made on shortening lead times, although he regrets that the recession has hampered major advances in this area.

VL has seized an opportunity to add value to its overall contract with Mack, offering the manufacturer the option of using it to ensure trucks held for long periods in the yard remain in peak operating condition. While most are produced to specific orders, some have to be sent to body builders that cannot always accept them straight away, so delays have become ever more common.

“We therefore instigated a 30-, 60- or 90-day maintenance programme for those vehicles that need to sit for any period of time at the factory. Our yard handlers check the various fluids and exercise each of the trucks, which helps to stop things like batteries dying when they are stored in cold weather. Although this does imply a certain cost, in the long run it pays for itself, since vehicles break down less often en route to the dealer.” For commercial reasons, Balazs declines to reveal the exact number of trucks VL handles on behalf of Mack, although confirms that the logistics provider is responsible for the entire output. Mack, like most commercial vehicle manufacturers, saw sales declines of more than 50% during 2009 before bouncing back somewhat during 2010, with both 2011 and 2012 shaping up to be much better. While Balazs is confident about the future, he too is worried by the projected shortage of drivers faced by the industry, with over half the existing ones now approaching retirement age and younger generation reluctant to join (see p10 for more).

He is also acutely aware that the recession has forced capacity out of the carrier market, which means that a delicate balance has to be struck between VL cutting costs and the carriers that remain being able to stay in business. “From time to time, we do ask our carriers to re-examine processes, as we ourselves are doing. But we don’t continually beat up on them, since on the whole they are maintaining agreed lead times and we are happy with how they are performing.

“We both have to be smart about what we are doing because there are only a limited amount of carriers that can provide the kind of service that we are looking for,” stresses Balazs, adding that contracts with carriers are signed for periods of 1-3 years.

Alternative options
Nevertheless, he is adamant that VL is not being complacent. As part of the rethink prior to the August 2008 process re-jig, the company seriously considered setting up a hub-and-spoke distribution network, but this was viewed as uneconomic given that production is essentially based on the East Coast and the number of vehicles heading west does not yet justify setting up such a facility, though this is kept under review. He also confirms that every 12-18 months rail is looked at as a possible alternative method of distribution for some parts of the country. But while pricing is commensurate with road, lead times are not. Transport from Mucungie to a dealer on the West Coast could involve transit times varying anything between 7-22 days, for example.

“Our contract with Mack is based on a service level agreement and our customers expect their truck to be delivered on a certain date. When you’re dealing with cars, people are sometimes prepared to wait a little longer than usual, but commercial vehicles are tools and they earn money, so lead times are critical to ensuring sales,” emphasises Balazs. As for track-and-trace capability, VL offers customers an on-line service: the Vehicle Tracker, which allows them to log on and know instantly when individual units are released from the factory and handed over to VL. They will also be made aware of where that vehicle is in the logistics process and what the estimated delivery date is. Balazs indicates a 99% on-time delivery.

Beyond Mack business
In terms of future development, VL will definitely be looking to win third-party business in North America. The company is already externally active in Europe, where it takes care of distribution for companies such as Jaguar-Land Rover, nowadays owned by the Tata group. Balazs believes that VL could leverage this experience in North America to help existing clients in Europe improve market penetration in the US and Canada.

“The more volume we can handle, the better the rates we can negotiate with carriers, not to mention strengthening existing relationships,” he says.

VL’s North American division already takes care of the various logistics requirements of Volvo Cars, as well the separate Volvo group in that market, including looking after construction vehicles, Nova buses and even the premium coach Prevost business, this latter requiring what Balazs characterises as a “white glove type of delivery process”. VL has also recently been contracted by Mack International to provide logistics for commercial vehicles that it ships overseas, mainly to Latin America. This involves moving outbound vehicles from the plant to the specialist body shop and then onto the port of despatch.

“We have earned that business, which we will manage right up to the port of entry as from the beginning of 2011.”