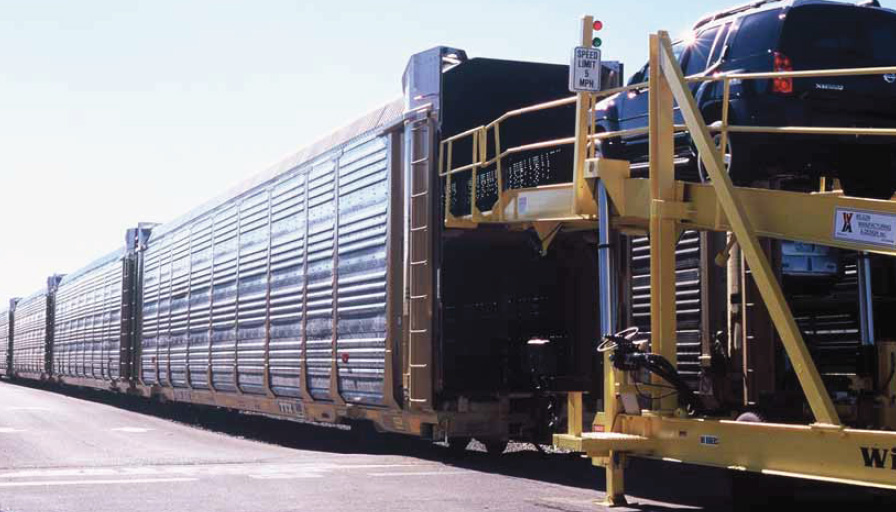 The global economic downturn has killed off orders for new specialist car carrier rail wagons, even though industry experts agree there is a lot of scope to improve the design of this equipment to better serve the needs of the market, writes Barry Cross.

TrinityRail, the leading US manufacturer of car carrier wagons (or auto racks, as they are called in North America), produces its equipment almost exclusively for the North American market, eschewing opportunities overseas. Acquisition is mostly the result of an outright purchase by individual railways; however a small percentage of the car-carrier wagons in service are operated through leasing agreements. The exact market demand varies widely from year to year, says Rob Ortner from TrinityRail. There are approximately 52,000 car-carrier wagons in the North American pool, with, on average, 1,300 replaced annually, given an average life span of 40 years. However, rail’s share of the new vehicle transport market has remained relatively static over recent years, he says, although approximately 70% of all regional output does travel for at least a portion of its trip by rail.

The essentially stagnant nature of the market has been exacerbated by the recent economic downturn; TrinityRail is not currently constructing any new wagons for automotive. Indeed there are surplus racks in storage that are available to handle any expected increase in vehicles generated by a rebound in the auto market. However, Ortner reports that the industry has experienced an improvement in volumes in the first quarter of 2010 following a very difficult 2009. Asked what factors customers focus on before making a purchase, he notes, “Product life-cycle costs are taken into consideration, as are nuances in technology that make the auto racks more efficient, easier to load and unload, or that provide better security for damage-free delivery of the finished vehicles. There is also competition between car builders, so price remains important.”

TrinityRail provides a full product range of wagons, encompassing bi-levels, which are typically used for SUVs and trucks, tri-levels, used for smaller cars, and higher capacity articulated wagons for service across North America. As to possible future developments, Ortner says the company expects to continue to improve the overall ride of the wagons, and is also testing new tie-down devices to reduce the chance of damage in transit.

With the downturn, railways have also struggled to cope with the fluctuations in vehicle sizes, given the lifespan of their assets. Union Pacific, for example, has a fleet made up of 72% bi-levels, with the remainder tri-levels. According to Julie Krehbiel, vice president and general manager, the company currently has about 15% of its bi-level wagon fleet in storage because of the recent shift to smaller cars in the US. 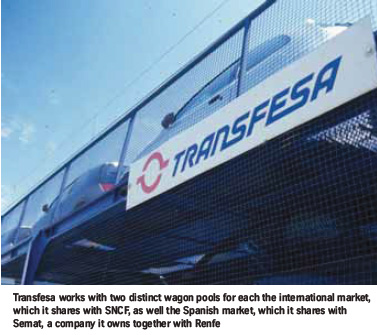 In response, UP has designed a new multi-level wagon that can switch between a bi-level and a tri-level configuration. The wagon will compete with the Auto-Max wagon, built by Greenbrier, which pushes two platforms together to convert to a bi-level. For the UP version, the B-platform is removed. Krehbiel said that UP would likely put the wagons into the North American pool and sell them to the other railways. “Our projections are that if the US market reaches 13.8m units in 2011, as the latest IHS Global Insight forecast suggests, we will build about 400 of these railcars,” she says.

On the other hand, trying to find European manufacturers currently making wagons proved even more difficult. One major Polish producer told Finished Vehicle Logistics that there is currently no demand. A manager from one of Europe’s leading wagon builders (based in France, who also asked to remain anonymous) said the company is not producing this type of wagon either right now. He noted that many wagons in circulation are more than 20 years old. However, refurbishment companies can modernise these even if they are more than 40 years old.

Short contracts hamper investment
The French manufacturer notes that as well as having thousands of wagons in storage in Europe, operators also struggle since contracts are invariably limited to no more than two years, while others last just a few months. “So operators are reluctant to invest,” he says.

He sees a clear disconnect between the long-term investment that operators have to make in equipment and the brevity of today’s contracts, effectively making new investment difficult to justify.

“Logically, for hauls of more than 1,000km, more cars should travel by rail, but cross-border bureaucracy effectively undermines the obvious advantage of doing so. The problem is compounded in Europe by a lack of capacity–the existing [rail freight] network simply cannot carry all the new cars that potentially could benefit from rail haulage.” The result is that, whenever operators look for new carcarrier wagons, the cheapest price wins, irrespective of the technology involved. There are possible improvements available to upgrade traditional designs, but these would cost money. For example, more space could be incorporated into a modern car-carrier wagon, which would result in a larger number of vehicles being carried. This would involve raising the height of the wagons, which, in turn, would be limited by the existing loading gauge. As to whether such a wagon could be built in Western Europe at an affordable price is also open to question, he adds.

India: land of opportunity
The position in India appears to be more optimistic. The Research Designs & Standards Organisation (RDSO), based at Lucknow, has recently completed design of two different bi-level wagons for Indian Railways.

The first allows block trains to accommodate up to a maximum of 288 Maruti 800 cars. However taller vehicles, such as the Maruti Wagon-R and Maruti Omni, can also be carried on the lower deck. RDSO calculates the earnings per block train at $2.85m annually.

More recently, RDSO converted existing container wagon flats into bi-level car carriers, which have been deployed on routes out of the Maruti production facility at Gurgaon to Mundra Port and Chennai. The design was authorised by the Railway Ministry.

The converted wagons, which were built by the Jagadhari workshops of Northern Railway, can carry up to 270 vehicles of various types at speeds of up to 100km/h. RDSO estimates annual earnings potential of $2.81m per block train.

Changing gear in a volatile market
In the US, TTX Company reports that, as of April 30th 2010, it was managing 50,797 multi-level rail wagons as part of the US National Reload Fleet. Of these, 36,750 are bi-level wagons –including articulated bi-levels–and 14,300 tri-levels. TTX also looks after 183 Automax cars, although other Automax rail wagons are also managed outside of the Reload fleet. According to TTX’s Mike Hoefert, there was a significant impact on the pool from the fourth quarter of 2008 to the fourth quarter of 2009. “The railroads needed to store railcars. The storage peaked on July 10th 2009, with 25,108 railcars set aside, as compared to 4,503 bi-levels stored long-term–more than 30 days–on April 30th 2010. TTX will further reduce the bi-levels stored if demand warrants it,” says Hoefert. Hoefert stresses that it is the individual railways and their shippers who agree on the actual number of wagons required; these are acquired and then assigned to the National Reload Fleet. However, TTX does help by running an industry ‘Fleet Size Model’ programme, which recommends an optimal number of bi-levels and tri-levels to handle forecast demand. TTX also provides the majority of the flat cars, leaving it up to the railroads to provide the actual “racks” for bi- and tri-level operation.

Crossing borders in Europe
Over in Western Europe, Madrid-based Transfesa is one of Europe’s leading logistics companies, with around 90% of its business dedicated to the automotive industry, primarily pan-European rail-based logistics for fully built cars and interplant vehicle parts and component shipments.

Abraham Peralta notes that, for the transport of new cars, Transfesa works with two distinct wagon pools. For international 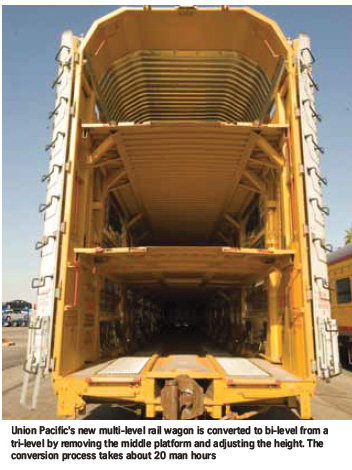 shipments, it makes use of the Hispanauto pool, which encompasses wagons owned by Transfesa and SNCF subsidiary STVA. These wagons are equipped with interchangeable axles, which allow them to negotiate the break of gauge between the Spanish and French borders without vehicles having to be transhipped.

In the domestic market, the company works with the Ibérico Railway Pool, which is comprised of its own wagons and also those of Semat, a Spanish operator owned jointly by Transfesa and Renfe, the state-owned operator of freight and passenger railways in Spain. These are all broad gauge wagons. “Transfesa’s policy is one of building and designing its own wagons,” says Peralta. “Only in exceptional cases, by which I mean atypical market demand, would we hire in wagons either for a single journey or for a limited period of time.” The fleet of car carrier wagons used by Transfesa has been in operation for an average of 15 years. Currently, the fleet is being modernised to bring it up to the needs of the market and of its various clients. Units are either being modified or refurbished in terms of both structure and technical elements as a means of boosting utilisation and capacity.

“Because of our particular requirements in terms of rail gauge, most of our suppliers tend to be Spanish, which are usually more competitive than those in Central Europe. However, in recent years, even domestically-produced wagons have become more expensive, basically because of the rising price of steel. Rail vehicle transporters have therefore become less competitively priced than those of other forms of transport,” says Peralta.

Transfesa calculates that the amortisation period of a new wagon is in the region of 20 years, which is equivalent to its optimum operating period. For upgrades and refurbishment, amortisation is calculated as being achieved within ten years. Peralta points out that Transfesa is currently upgrading its wagon fleet to adapt it to the dimensions of new car models. New technology should also allow wagons to be better used, since they will be able to accommodate a wide range of models.

“There are a wide range of restrictions that we continue to face, affecting things such as gauge, speed and safety, which effectively prevent us from introducing certain upgrades that would allow us to operate a more homogeneous and higher capacity fleet,” he observes, pointing out that adding capacity to many wagons would allow Transfesa to operate more competitively in the market.

Since the 1980s, the company has been offering higher levels of quality in vehicle transport, which has meant incorporating lateral protection in both the upper and lower decks, which helps prevent damage from vandalism and theft of vehicles whilst in transit. At the same time, it has also operated more multi-client block train services and also trains bound for a range of destinations, both of which have cut transit times and therefore reduced the amount of time vehicles have been exposed to potential damage.

Peralta says that wholly-covered wagons are only feasible on cost grounds when handling luxury cars or where trains run along highly risky routes. “In all other cases, our clients are not prepared to pay the extra premium that this type of wagon requires if it is to operate profitably,” he says. “Current market conditions also predicate against acquiring new transporter wagons at the moment.”