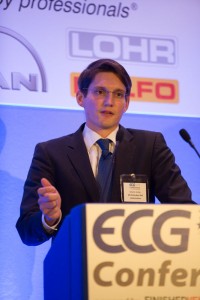 A lot of attention has been given to OEMs’ plans for autonomous vehicles and connected cars recently but OEMs aren’t the only ones innovating in this direction. At the recent 2015 annual conference of the Association of European Finished Vehicle Logistics (ECG), Malte Keller, head of equipment and Germany transport and logistics giant DB Schenker, explained that the rail operator is currently working on automated train operations, as well as connecting its wagons and rolling stock with the use of sensors.

Keller explained DB Schenker’s vision of a connected rail system, where all wagons and locomotives would be equipped with sensors and systems, and operate automatically. The development is designed to increase the utilisation and deployment of locomotives, as well as help DB Schenker better utilise its infrastructure.

Working with Siemens, the company is focusing on developing autonomous steering, obstacle detection – recognition and classification of potential obstacles by various sensors with automatic braking – and self-diagnostics, with real-time monitoring of critical parts as a basis for availability.

The introduction of automated trains could also provide answers to a number of issues relating to human resources, not least in providing independence from strike issues, something that DB Schenker has been a victim of through repeated strike action by Germany’s GDL union.

Automated trains could also address the restrictions on international rail flows, which can be hampered by having to change drivers at border crossings.

GPS visibility
Supply chain visibility is an ongoing issue in logistics. While companies including DHL and UPS offer complete visibility of small packages, the automotive industry has not achieved the same with an expensive product. DB Schenker wants to improve this visibility with GPS based tracking and tracing, which would also help to optimise maintenance and optimise logistics for customers. The GPS devices could include sensors for energy management, loading conditions, acceleration, shock, position, weighing and external influences.

Through two projects, DB Schenker has plans to roll out the new technology over the coming years. For the proposed new main line locomotives, the company will first test the basic functions at a test centre to evaluate the technical feasibility and operability with the European Train Control System. The automated shunting locomotive will first be tested at the shunting yard, and then potentially rolled out to more locomotives.

While a roll-out of the sensor system DB Schenker is working on with Siemens is still a way off, Keller suggested that initial study results are expected soon. More immediately, however, the company will test the use of sensors on its automotive wagons, beginning in November of this year, with the pilot phase beginning in February 2016.

These sensors are designed to provide automatic readings on position, shock, acceleration, loading condition, energy management, external influences and weight. If the wagon is closed, they will also measure air pressure, temperature and air humidity.

During the pilot phase DB Schenker will discuss the project with customers, analyse data and benefits, as well as looking at technical specifications. The final decision is expected in the third quarter of 2017, and if successful, the asset intelligence technology will be rolled out across the automotive wagon fleet.