ECG president Baldissara to step down in 2016 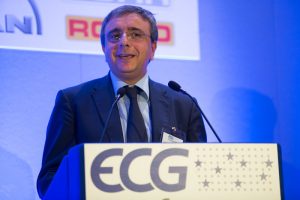 Costantino Baldissara, commercial and logistics director of the Grimaldi Group, will step down from his position as president of the European Finished Vehicle Logistics Association (ECG) next spring.

Wolfgang Göbel, managing director of Mosolf Automotive Railway, and head of marketing and logistics for the Horst Mosolf Group, will be nominated by the board to replace Baldissara, who has been president of the association since 2009. Göbel has been a board member at ECG since 2003, and vice-president since 2009.

The official election will take place at the ECG General Assembly meeting in May next year in Lago Maggiore, Italy.

Speaking earlier this year at ECG’s Spring Congress, Baldissara reflected that he had a challenging tenure as president, having taken over just as the economic crisis began to take its toll on the finished vehicle carrier industry and the automotive sector more widely. He acknowledged it had been a difficult time both for the Association and for its members’ individual businesses.

However, Baldissara said that those testing economic times meant the Association had matured and was in a strong position going forward.

ECG was established in 1997, and represents around 100 vehicle logistics companies from 27 countries across Europe, Russia, Ukraine and Turkey. The association exists to promote the interests of car carrier operators, including lobbying the main EU institutions, facilitating collaboration between member companies, and promoting the sharing of best practices.