EEU cuts import duties but trade within bloc is in dispute 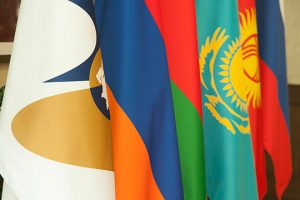 The Eurasian Economic Union (EEU) has officially cut duties on finished vehicles being imported into the bloc from 20% to 17%. The rule took effect from September 1 this year, while a further reduction to 15% is proposed to take place at the same time in 2019. The EEU comprises Armenia, Belarus, Kazakhstan, Kyrgyzstan and Russia.

However, there is some confusion about duty on trade in finished vehicles between the member states because of existing disputes over import/export duties.

In a statement, the EEU said import duties on vehicles from outside the union were reduced in accordance with Russia’s obligation as a member of the World Trade Organisation (WTO). When it joined, Russia agreed to reduce duties on imports to 15%, which it has been working toward since 2017 and will reach next September. It was reduced from 23% to 20% last year. This duty target has now been set for all five EEU member states.

The import duties are applied on finished vehicles imported from any production facilities outside of the economic bloc. Trade between EEU member states is supposed to be duty free as well, however, a trade dispute in July meant localisation rates were revised and most assembly plants in Russia, Kazakhstan and Belarus lost their ability to moved finished vehicles duty-free across their borders.

Previously, almost all Russian carmakers, as well as those foreign carmakers with plants in the region, were registered on the EEU’s database of duty-free exporters because they met the 30% localisation requirement. To continue to do so now however, they need to ensure the vehicles they are exporting have at least a 50% local content. No information has been released to indicate whether the dispute has been resolved in the face of the new EEU targets.

In addition, in spite of the statement released by EEU, this week the Kazakh Finance Ministry told local news outlet Sputnik that there would be no reduction on import duties in Kazakhstan because payments were already lower compared to those charged on the border of other EEU member states.

Import impetusLower import duties would give added impetus to the growth Russia has seen in vehicle imports lately. In the first six months of 2018 the country imported 138,300 finished vehicles, 22.6% up on the same period in the previous year, according to data from the Russian Federal Customs Service. Imports totaled $3.4 billion, the Customs Service estimated.

However, whether that growth will continue is in question, according to Anna Komarova, head of finished vehicle logistics at Gefco Russia. She explained that the increase in imports over that period could have been down to the strong rise in the utilisation fee that came into force in Russia from April 1, 2018. To avoid the increased charges some companies were importing finished vehicles in advance of the date regardless of demand in Russia and it remains to be seen whether imports would continue at the same rate for the second half of 2018, she said.