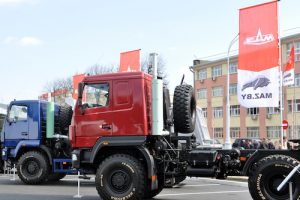 Carmakers with assembly plants in Russia, Kazakhstan and Belarus are now unable to export finished vehicles duty free within the Eurasian Economic Union (EEU), because the localisation rate has increased.

Previously, almost all Russian carmakers, as well as those foreign carmakers with plants in the region, were registered on the EEU’s database of duty-free exporters because they met the 30% localisation requirement. To continue to do so now however, they need to ensure the vehicles they are exporting have at least a 50% local content.

Only Russian vehicle makers Kamaz, Belarus MAZ and several Kazakhstan truck manufacturers, such as Hyundai Trans Auto and Daewoo Bus Kazakhstan, are registered in the database in accordance with the new requirements. Currently, there are no passenger car manufacturers or foreign carmakers that have passed the new registration limits.

Wilhelmina Shavshina, legal director and head of foreign trade regulations at legal firm DLA Piper, confirmed that from July 1 2018, Kamaz was the only Russian carmaker able to continue duty-free exports within the EEU. She explained that all finished vehicles originating in Russia supplied by other companies to Kazakhstan or Belarus are now subject to import duties.

“Originally, the increase in localisation requirements for duty-free exports was initiated by the Russian government in a bid to protect the domestic market from the import of finished vehicles under Geely brands from the BelGee plant in Belarus,” a source in the industry told Russian newspaper Kommersant.

BelGee is a joint venture between the government of Belarus and Chinese carmaker Geely.

Reportedly, Belarus could not block the measure because it uses semi-knockdown (SKD) kits with a localisation rate below 50%. However, according to Kommersant, authorities in Belarus found a way to bite back.

“Belarus found no Russian company, not even Avtovaz, matched the new localisation requirements,” the source said. The EEU rule requires that all member states must confirm their automotive plants match the new criteria, so that they can be registered in the EEU’s localisation database.

The conflict promises to make a heavy impact on the automotive industry in the EEU, as the trade between its members is significant.