PSA to concentrate on two platforms 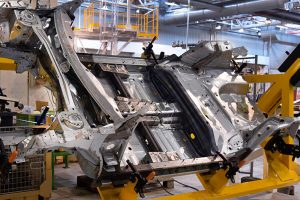 PSA Group is to base all models on one of two car-construction platforms by 2025 to save costs and achieve efficiency gains – including by implication in the supply chain.

As part of its overarching Push to Pass strategic plan, the French company has been reducing its platforms worldwide to optimise research and development expenditure and the effectiveness of its production processes.

Ultimately, this will lead to manufacture of all PSA passenger cars on two multi-energy platforms: the Efficient Modular Platform 2 (EMP2), which has been around since 2013, and the Common Modular Platform (CMP), launched this year with the DS3 Crossback.

The scaling-back to a pair of core platforms coincides with the Paris-based company’s campaign to introduce electrified versions of its vehicles from 2019.

“The new models made on these two platforms will be available in internal combustion (petrol and diesel), electric and hybrid versions in tune with the transition of energy deployment,” it said.

Through to 2021, core models – essentially city cars of all PSA brands – will be built using the CMP, with the 100% electric powertrain variant (eCMP) entering the mix next year. The group plans to launch seven electric vehicles produced on the eCMP by 2021.

As for mid-end and high-end body styles, they will be produced via the EMP2 platform which will in future accommodate the plug-in hybrid petrol-electric vehicle (PHEV) powertrain. Eight PHEV models across the Peugeot, Citroën, DS, Opel and Vauxhall brands are to hit the roads by 2021.

PSA’s goal is to have its entire range electrified by 2025.

“The ingenious design of its two platforms and the streamlining of its series production processes have given Groupe PSA the flexibility to adapt to changes in the energy mix in its various markets,” commented Gilles le Borgne, executive vice-president for quality and engineering.