Pre-series production of the new EV has begun at the Volkswagen plant in Zwickau, which will be relying on a supply chain linking other VW factories in Germany and Poland. 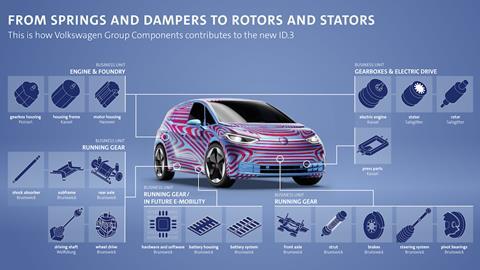 Kassel will also manufacture the platform parts of the battery box frames, damper mounts, cross-members and tunnel, which are delivered to Zwickau for assembly to complete the vehicle body. Kassel will also make the ID.3’s dual-clutch gearbox.

As part of the transformation to electric mobility, VW said the components plant in Salzgitter is becoming specialised in manufacturing rotors and stators, in addition to conventional engine production. In future, up to 2,000 rotors and stators will be produced daily, along with petrol, diesel and compressed natural gas (CNG) drives.

Salzgitter will also host the group’s centre of excellence for batteries, to be opened by the end of the year, followed by a pilot plant for recycling in 2020.

The ID.3’s battery system will be manufactured at Brunswick (Germany), with a new hall the size of nine football pitches built especially for production of the key component. It is due to open in Q4 with around 2,000 units a day produced and delivered to Zwickau.

In addition, the VW Group has allocated Kassel for production of electric drives for all MEB vehicles in Europe and North America, building up to 500,000 units a year.

“Kassel works closely with the Chinese plant in Tianjin where the electric drive is produced in parallel for the Chinese market. Together, the two plants will produce up to 1.4m electric drives each year from 2023 onwards,” the company said, adding that Volkswagen Group Components will become one of the largest manufacturers of electric vehicle drives worldwide.

Volkswagen Group Components was set up at the start of the year tasked with reducing costs by €2 billion ($2.26 billion) while improving efficiency and taking on board the increasing importance of EVs.

“We are concentrating on modifying our plants to manufacture new products for electric vehicles,” said Thomas Schmall, chairman of the board of management of Volkswagen Group Components. “Certain plants are being specialised, and at the same time we are making use of the synergies through the manufacturing of components within the group.”