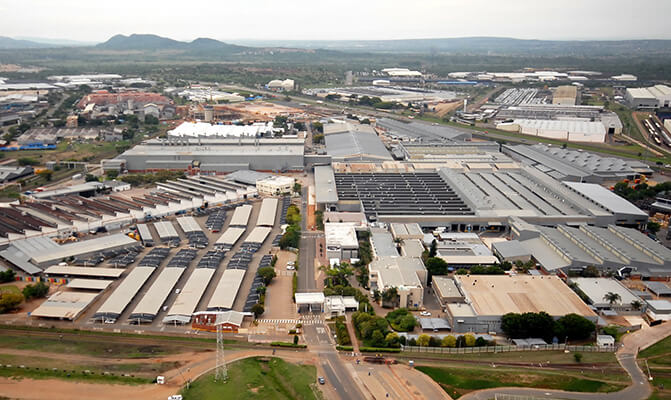 Vehicle sales are down as consumer confidence has fallen and automotive manufacturers are keeping production going by sacrificing non-essential plant functions. President and CEO of Toyota South Africa Motors, Andrew Kirby, has said that the power cuts ‘could be a disaster’.

At a press briefing at the end of February, Kirby, who is also head of the National Association of Automobile Manufacturers of South Africa, said: “So far, we have been able to avert any production stoppage. So we haven’t lost any volumes, but if you walk into our plant, the lights are off and air-conditioning is off and some lines have stopped.”

Eskom provides around 95% of South Africa’s electricity but relies on an ageing collection of coal stations that are increasingly prone to breakdowns. A sporadic shortage of diesel has also put several other backup power stations offline. Meanwhile, two mega coal stations commissioned a decade ago to form the backbone of the South African energy fleet are still years away from completion.

As a result, Eskom has come to rely on ‘load shedding’ – scheduled blackouts implemented around the country to avoid a grid crash. Everyday essentials ranging from internet connectivity and mobile networks to traffic lights and internet banking are down for hours, impeding business activities.

Impact on auctions and dealershipsAccording to the country’s largest automotive financier, WesBank, that load shedding has worsened car sales in February. New vehicle sales ended the month on 43,251 units, 6.5% down on the same period last year.

“While we expect first-half sales to be slow, the market was no doubt rattled by the week-long impact of load shedding at the beginning of the month, which impacted consumer and business confidence,” said Ghana Msibi, WesBank executive head of motor.

Anecdotal reports suggest that second-hand car auctions have also gone quiet, as dealers avoid stocking up in anticipation of a consumer buying slowdown. New vehicle dealers are also citing load shedding as a reason for fewer customer coming through their doors.

“The slowdown in consumer demand, as evidenced by passenger car sales through the dealer channel declining 14.4%, is concerning,” said Msibi. “This is also reflected in consumer demand for light commercial vehicles.”

As load shedding results in traffic signals not working, all the major urban areas report chaotic conditions that are impeding motorists and also freight vehicles from entering or exiting the cities. However, the major automotive export ports of Durban, Port Elizabeth and East London are so far experiencing less traffic disruption and port operations appear to be running normally.

No end in sight“Eskom has simply run out of diesel,” said Ted Blom, a Johannesburg energy analyst. “They need about 50,000 litres an hour for one diesel station, and there are about 12 in the country. They hadn’t predicted that a large part of their coal fleet would break down. Now they’re out of fuel.”

The frequency of the power cuts has increased since October last year, though there was a respite over Christmas, a time when most industry shuts down. They began again in February and seem set to continue.

Eskom has a standing agreement with industry to ask them to shed 10-20% of energy use when requested. Most industries have already made provision for energy saving. Some have built their own energy plants. BMW South Africa, for instance, has a biogas facility that uses agricultural waste to produce up to 30% of its electricity needs.

It is unclear when or if there will be relief from the power cuts. Energy experts say the state needs to deregulate the electricity sector and increase private providers of renewables such as wind and solar. Eskom, however, has fiercely protected its monopoly and the country’s powerful unions have also opposed private sector energy firms. Yet, with the energy crisis growing worse by the week, the government may need to enact long-delayed reforms to allow the private sector full access to the electricity sector.

At a press briefing in Johannesburg on Tuesday, public enterprises minister Pravin Gordhan, whose ministry oversees Eskom, suggested it would take at least two years to solve the problem. “We understand the frustration. We don’t have a magic formula,” he said.

Given this inertia in government, businesses in South Africa are likely to continue to struggle.