Middle East and Africa: Ford opens up the highways

An army marches on its stomach, Napoleon is reputed to have said, in perhaps one of history’s earliest endorsements of the wisdom of sound logistics infrastructure. These days, as those in the automotive industry know, good logistics in the marketplace is often the key to winning business and meeting the changing needs of customers.

Increasingly, it is this logistics and supply chain capability that is determining success in the automotive aftermarket and service parts sector – and, consequently, in the vehicle sales market. After all, there’s little point buying a vehicle if the associated aftermarket service, in terms of parts availability and distribution networks, isn’t up to the job.

[related_topics align="right" border="yes"]Ford is certainly one carmaker that has been making enormous efforts in the aftermarket customer service business. In a four-part interview last year, Frederiek Toney, president of the Ford Customer Service Division (FCSD), revealed the extensive work Ford was doing to keep up in a global aftermarket where competition from independent distributors, e-commerce and smaller retail outfits is ever stronger. Important parts of this include the carmaker’s roll-out of new IT initiatives, carrying out supply chain upgrades and supporting new consumer-facing sales initiatives, such as Ford’s Quick Lane ‘no appointment’ multi-brand auto centres. The carmaker has also introduced an expanded ‘all manufacturer’ parts portfolio, Omnicraft, which began sales earlier this year in the US and which will eventually become a global business.

The scale of Ford’s commitment is undoubted: an inventory of some 300,000 part numbers held across 66 warehouses and distributed to a network of over 10,000 dealers. Moreover, it is a commitment that can only grow: even as vehicle model lifecycles shrink, an ageing vehicle fleet – the average age of vehicles in the US and western Europe is now 11.5 years – creates the need to support vehicles for longer. A parts retention policy of seven years, for instance, has been changed in many regions to one of holding parts for 10-15 years.

Few carmakers can claim to be as global as Ford, and its aftermarket business is no exception. And one of Ford’s important emerging markets – as well as important supply regions – is Africa and the Middle East.

The region is already significant for Ford, both in vehicle sales and production. South Africa, for example, is an important hub of production for the carmaker, including for the Ford Ranger pickup and Everest SUV, which are exported to many markets and therefore also drive a significant export of parts from Africa across the world.

This is also a region with many challenges; current geopolitical problems across the Middle East and Africa, for example, remain a drag on sales. After Ford reached 187,000 vehicles wholesale in the region in 2015, volume dropped 14% last year to 161,000. In the first quarter of 2017, the decline continued, with wholesale dropping 35% compared to 2016, to 30,000 units.

However, Ford is maintaining a strong presence and focus in a region where sales growth is expected to be substantial over the medium-to-long term. A recent study by the strategy arm of PWC, Strategy&, contrasts the ‘relatively flat’ sales growth of North America with the EU. Yet the Middle East and Africa, it notes, “will likely see strong and consistent automobile sales growth, with the biggest improvements expected in Iran, Egypt, South Africa and Nigeria.”

Moreover, it adds, manufacturers and dealers are “collaborating to optimise parts distribution networks, and expand the service and maintenance network”. Thanks to initiatives such as increased dealer adoption of IT systems to gain transparency for parts distribution – together with connectivity to carmaker systems – and work to tackle the counterfeiting of parts, market expectations are rapidly rising.

Stability amidst uncertaintyIn the hot seat, spearheading Ford’s response to these economic and consumer changes, is George Goddu, the Dubai, UAE-based regional head of FCSD for the Middle East and Africa. Goddu is responsible for a full set of service and dealer programmes across the region, as well as ultimately for its service parts logistics network and distribution, which includes managing two parts distribution hubs – one in Dubai and one in Pretoria, South Africa – and a team of 148 employees. Goddu reports to Frederiek Toney.

Central to the operation, explains Goddu, is the Dubai parts distribution centre (PDC). Parts come here from a 234-strong supplier base and 18 affiliates across North America, Europe, Thailand, India and South Africa. Each supplier ships directly to the Dubai PDC, which Goddu calls a “one-stop shop” for regional dealers. Outbound, the PDC supplies 311 Ford main dealers across the region, which in turn support multiple customers in their respective markets. Parts are also shipped from the region to 93 export markets.

[mpu_ad]The PDC’s strategic location in the Jebel Ali Free Trade Zone simplifies customs paperwork and associated tariffs, as well as being close to one of the world’s very largest seaports and Dubai’s Al Maktoum International Airport. Both the port and the airport play their part in terms of the PDC’s inbound parts, reports Goddu: sea freight is the preferred mode, supplemented by air freight when necessary. In emergency situations, expedited air freight is used.

In a region where infrastructure constraints can be significant, customer demands are strong and political certainties often few, such emergencies are not unusual (witness, for example, the recent embargo of Qatar among Gulf states). Not only is aftersales service demand inherently volatile in volume and mix, but the region’s economic and political conditions make such volatility difficult to forecast.

“Dealer demand can differ greatly by region,” explains Goddu. “These fluctuations can be caused by such factors as cultural events, seasonality, weather, currency and changes in taxes and duties. Additional challenges can result from countries changing import regulations, or regional parts testing, or region-unique labelling requirements.”

In Dubai, Ford’s outbound parts logistics activity is managed through third-party providers, with transport mode determined by the geographical location of the customer and the urgency of the order. The majority of shipments are full truckloads, with less-than-truckload freight for handling small orders within the United Arab Emirates’ neighbouring Gulf states. Air freight is a major mode of transport for sub-Saharan Africa, but not for the Middle East itself, says Goddu.

By contrast, the South Africa operations are manned primarily by Ford employees. Next-day delivery through a third-party provider has enabled dealers across southern Africa to maintain high inventory turns while improving customer satisfaction.

“Typically, we have no issues on our inbound replenishment orders to the Dubai depot. On the outbound side, though, seasonal logistical bottlenecks can occur during and after Ramadan and during the Eid period. This happens twice a year and we convert to sea shipments during these times to prevent any delays,” he says.

Opening up the highways of AfricaAnd what of the future? A series of IT investments, says Goddu, highlights Ford’s commitment to meeting its customers’ growing expectations in terms of service levels and responsiveness. Internally, for instance, the Ford-developed web-based warehouse management system used in both South Africa and Dubai PDCs is slated to be replaced by an SAP system in 2020. 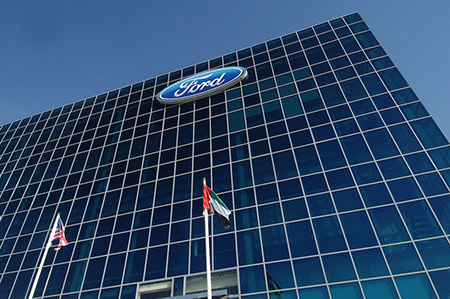 The Dubai parts distribution centre receives parts from a 234-strong supplier base and 18 affiliates across North America, Europe, Thailand, India and South Africa. Outbound, it supplies 311 Ford main dealers across the region and parts are also shipped to 93 export markets

What’s more, Ford is also preparing its business across the Middle East and Africa for changing consumer habits, notably around e-commerce orders. Dealer and distributor facing e-commerce pilots are starting in South Africa and Saudi Arabia, with a further study exploring how e-commerce can enhance the Dubai PDC’s own supply and logistics capabilities.

Global initiatives around Quick Lane services, as well as Omnicraft or its Motorcraft brands, are also highly relevant for the Middle East and Africa. However, Goddu notes that the actual application, as well as logistics needs, will vary compared to the US or different regions in Africa. For instance, in small markets, Quick Lane could be 2-4 service bays equipped differently to those in a larger market. In rural markets distant from a full Ford dealer service facility, they might perform some larger repairs to accommodate owners.

The customer service division has a clear role in supporting Ford’s overall innovations in its customer-facing offerings, such as mobile apps to permit customers to book services, authorise repairs, receive updates, pay for repairs, and receive documentation electronically, adds Goddu. In metropolitan areas, service offerings will increasingly involve picking up and returning vehicles from customers’ homes or workplaces, and even scheduling services to take place at customer premises.

“It’s an exciting time to be in the industry and we will develop our supply and distribution capabilities to meet these new challenges,” says Goddu. “We remain committed to Henry Ford’s promise to open the highways to all mankind.”