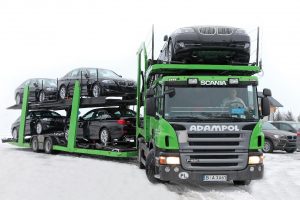 Russian automotive logistics providers have begun to raise concerns about a further capacity crisis in road transport this autumn, as finished vehicle volumes pick up after the summer.

Speaking to Automotive Logistics around the presentations at the recent Automotive Logistics Russia summit, Kirill Glukhov, business development director at Vectura, said a real shortage of road transporters had hit the market between October and the end of last year, despite a slight drop in sales in this period compared to 2015.

In some cases, he said, customers were offering up the three times the existing rate for such services.

“There was an acute shortage of automotive carriers and customers were rushing to outbid each other for transport,” confirmed Glukhov. “From early 2017, the rush started to wind down, but a slight shortage still exists.”

Logistics providers in the country now fear such acute shortages may arise again after this summer (traditionally a quiet time for production and therefore finished vehicle flows), Glukhov noted – in part because older trucks are being retired and vehicle flows are expected to grow after the summer, but also because many smaller transport companies (those with fleets of 30 trucks or fewer) have been forced out of the market in the meantime.

Konstantin Skovoroda, head of the board at Russian company Russian Transport Lines (RTL), said that during two major transport market shocks in December 2016 and March 2017, some logistics providers had been forced to default on their service obligations. During these periods, noted Skovoroda, the market was close to panic, with a number of ‘emergency’ contracts for finished vehicle transport being agreed at highly inflated prices. Fortunately, said Skovoroda, the market had largely calmed down since.

[related_topics align="right" border="yes"]Evgeny Korzh, head of finished vehicle logistics at Gefco Russia, said standard transport rates in Russia weren’t high enough to allow transport companies to invest in fleet renewal and that as a result, the total number of car transporters operating in the market was unlikely to change much in the next year or two.

Rail surplusIn contrast to what is happening in road transport in Russia, there seems to be a growing surplus in rail car capacity.

“In respect to the rail car transporters, there are nearly 1,000 standing idle. Changes in the tariff policy of Russian Railways in the course of 2017 allowed the railways to take over some routes from road transporters for finished vehicles in places like the Urals and Siberia, but there is still a surplus on the market,” Korzh said.

According to Russian Railways, low demand for freight services in 2016 led to three or four times more rail cars being retired than brought online.

Russia’s government has allocated 3 billion roubles ($50m) for the renewal of rail carriages and rail cars, including tax breaks and other incentives for companies bringing refurbished and new equipment into operation. But rates for rail transport remain worryingly low, Russian Railways has said.

[mpu_ad]In this respect, both rail and road are suffering from the same problem, said Glukhov. From 2012 to 2016, finished vehicle road transport rates were falling, while costs were rising, and economic pressures along with the collapse in the Russian rouble led many transport firms to divest themselves of much of their equipment to foreign buyers to take advantage of the exchange rate and get rid of illiquid assets.

That has obviously contributed significantly to today’s shortages, added Glukhov.

On the upside, the crisis has left companies like Vectura in a good position to strengthen their market position, Glukhov said. In 2016, Vectura completed the purchase of 100 new automotive carriers for an exclusive contract for finished vehicle delivery with Ford-Sollers, including handling imports and exports via Vectura’s parent company, Adampol.

Overall, assuming slight growth in coming years, a balance should be achieved, with the shortage of road transporters being offset by rising rail deliveries. But, as Korzh pointed out, Russia is not the most predictable of markets and it would not take much to disturb this uneasy balance.