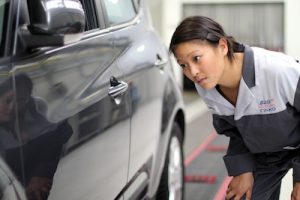 China topped the index once again, based on market size, ease of doing business and logistics infrastructure

The outlook for growth in emerging markets is decidedly mixed, according to a recent survey of logistics and supply chain professionals, with economic uncertainty compounded by worries over rising protectionism and restrictions to free trade from developed countries.

Nevertheless, continued expansion in China and improvements in a number of other countries suggest that supply chains – including those serving the automotive sector – will continue to shift towards emerging markets, with regionalisation of supply also on the rise in several regions.

The 2017 Agility Emerging Markets Logistics Index, which surveyed 800 supply chain professionals and crunched market data, has again ranked China top of the list based on market size, ease of doing business and logistics infrastructure. Impressive gains were made by India, however, which came second overall, and by Iran, which jumped eight spots in the ranking to 18th.

However, 24 of 50 countries measured, including 7 out of the top 10, experienced deteriorations in their overall scores. And while some Asian and Gulf states saw improvements, Africa’s largest economies, Nigeria and South Africa, fell significantly, being hit by low commodity and energy markets as well as other logistics disruptions.

The report’s authors noted that the automotive supply chain, which has been a driver of international trade and logistics growth, could be at the centre of significant change with global implications, notably should new trade barriers emerge following the UK’s decision to leave the European Union and single market, or as as result of the protectionist policies espoused by the new administration of Donald Trump in the US. 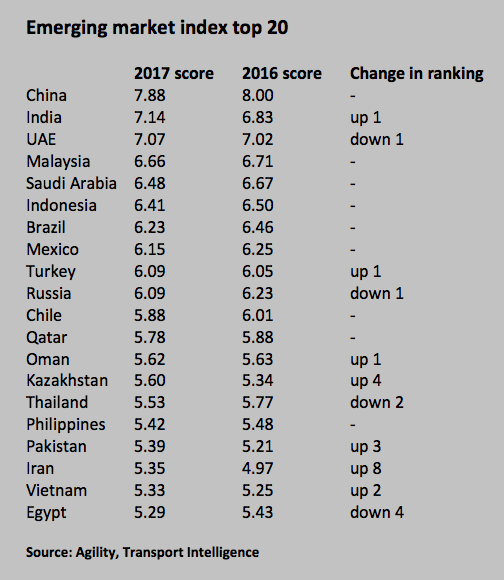 The index is compiled by UK-based analyst firm Transport Intelligence on behalf of Agility, a global logistics provider based in the Middle East.

At more than 4%, 2016 was the first in five years in which the overall rate of growth in emerging markets rose, said Essa Al-Saleh, chief executive of Agility Global Integrated Logistics, the provider’s supply chain division. The International Monetary Fund (IMF) has forecast such markets will grow by about 4.6% in 2017.

However, Al-Saleh pointed to an uncertain outlook in emerging markets. The Agility survey found that around 53% of respondents agreed with the IMF’s predictions, while 43% thought they were too optimistic and 4% expect notably lower growth.

“Based on the survey and outlook, growth in global trade has probably peaked,” he said.

That assessment was based in part on difficult trading conditions, low commodity and mineral prices, as well as corruption and security issues impacting countries including Latin America, Africa and Russia.

Last year’s Brexit vote and the US election, together with rising populism elsewhere, have contributed to negative sentiment. The survey revealed that nearly 69% of executives were worried about protectionism, with 21% very concerned about threats to free trade and 47.6% somewhat concerned.

John Manners-Bell, chief executive of Transport Intelligence, pointed in particular to risks for the automotive supply chain, including potential changes to the North American Free Trade Agreement (Nafta) between the US, Canada and Mexico. “It’s too early to predict, but obviously everyone is waiting with baited breath to see what Trump’s pressure and potential policies will mean for OEMs who have invested in Mexico to serve the US,” he said.

Mexico’s overall score slipped slightly this year, though it has retained its ranking as eighth in the index.

Manners-Bell pointed to the Trump administration’s official withdraw of the US from the Trans-Pacific Partnership (TPP), a trade deal that includes 12 countries in the Americas and Asia Pacific, as a further sign of risk to global trade.

Shrugging off the gloomDespite such pressures on global trade, both Al-Saleh and Manners-Bell pointed to reasons for optimism in the overall climate for logistics investment and growth in emerging markets.

In particular, they highlighted increasing supply chain regionalisation, with domestic consumption rising in markets including China, India and Iran. In China, respondents shrugged off slowing growth, with around 66% planning to maintain or expand their presence in the country.

India, meanwhile, surpassed China as the market where supply chain executives expressed the most potential for logistics investment, thanks in part to its improving climate for doing business and changing regulation. Al-Saleh said that the country’s planned implementation of a central goods and services tax (GST), for example, was set to have a positive impact on the country’s internal logistics and distribution market.

India surpassed the United Arab Emirates in the number two spot, but the UAE’s score itself increased; and between the UAE and five of its neighbours, the Gulf countries dominated the top ten rankings.

The lifting of western sanctions in Iran has increased logistics interest in the Middle East – including for automotive joint ventures – although Al-Saleh acknowledged companies were being cautious.

Brazil, despite being racked by a severe recession and political issues, retained its number three spot for logistics investment potential, and its overall ranking of seventh in the index, as executives expressed hope that “the worst was now over”, said Al-Saleh.

Despite the worries over protectionism and the sluggish outlook for international trade, Manners-Bell highlighted how growing regional supply chains in Asia, led by the rise of China as a major consumer and a growing import market, was already reorienting logistics flows in the region.

Now, with the US leaving the TPP, there is potential that China could replace it, or further emphasise regional links.

“We are already seeing the character of the supply chain changing, driven by China’s growth as a consumer and e-commerce market,” said Manners-Bell. “If China takes on a bigger role [following the US withdrawal from TPP], then those changes will only be amplified further.”

“Trade follows the path of least resistance,” added Al-Saleh. “If a country puts up barriers or pulls back, then somebody else will step in.”