‘End of an era’ as Steve Harley retires from Ford

A renowned executive across the carmaker and the industry for more than four decades, Stephen Harley is moving on. He talks to Automotive Logistics about what has changed in logistics as well as his last project at Ford Europe. 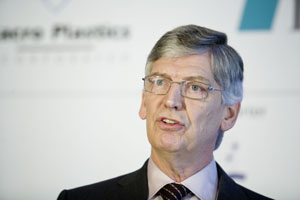 [This story was updated on 12 May 2014] Stephen Harley (left) will retire from the Ford Motor Company at the end of April after 42 years with the company, most of it spent working in logistics and supply chain management.

He will take up a position as director of advanced manufacturing at engineering and construction firm Laing O'Rourke.

Harley has recently been appointed president of the board at ELUPEG, a cross-industry logistics organisation, which is a position he will retain after he leaves Ford.

From assembly line to global top 25

Harley has had a long and distinguished career in Ford’s supply chain management. Most notably, he held Ford’s top logistics position as executive director for global material planning and logistics (MP&L) and parts supply and logistics (PS&L) from 2009 until October last year.

He has since been back in Germany to oversee projects related to transferring models to Spain and Germany following the closure of Ford’s plant in Genk, Belgium. Grant Belanger replaced Harley in the MP&L job last autumn.

Harley calls his departure from Ford “the end of an era”.

“It has been fantastic and I have wonderful memories,” says Harley. “I have no intention of working for another automotive company, as otherwise I would have stayed with Ford. I believe that in my piece of the business [supply chain and logistics], it is the best place to be.”

Harley began with Ford in 1972 as an hourly line worker at its Dagenham engine plant in east London. He worked his way through the company while obtaining degrees in transport and logistics, eventually moving into logistics management. Harley would later play an important role in establishing production of the Transit Connect van to Ford’s plant in Kocaeli, Turkey, before leading the MP&L function across Europe.

While executive director of global MP&L, Harley managed Ford’s supply chain during a period of tremendous transition, including plant closures and the emergence of a truly global supply. Ford had to adjust its supply chain as it closed around ten assembly plants in North America following the financial crisis. Today, the carmaker is highly profitable in the region, producing more vehicles with far fewer plants.

In recent years, Ford has also expanded its capacity and operations in Asia Pacific, including in China, where the company is now experiencing sharp growth. The implications for logistics have been significant, with a large amount of material flow between continents. 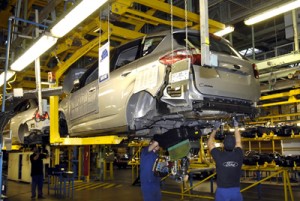 Since last October, Harley has been playing an essential role in restructuring Ford’s European supply base and plant designs with the shift the Mondeo, S-Max and Galaxy models from Genk to Valencia, Spain, and moving C-Max production out of Valencia to Saarlouis, Germany. He has helped to both prepare the plants for the new production as well as to relocate suppliers where possible.

Harley tells Automotive Logistics that, in many ways, the highlight of his career was last year when Ford was recognised in Gartner’s Supply Chain Top 25. At 22nd place, Ford was the highest ranked carmaker in the survey and the first to crack the top 25 in a number of years. “For me and my team, that was an enormous accolade, and it would be tough to top,” he says.

“Shortly after, I thought that I should move over; that Ford needed a new team and new ideas,” Harley says. “Ford has a longer span in its next growth phase than I am really in a position to serve.”

He adds, however, that he will not move into his next role as “just a temporary guy”, and that he is ready to make the appropriate commitment for the right amount of time.

From mimeographs to value-added logistics

Looking back over more than four decades in automotive logistics, Harley suggests that the biggest change he has seen in the industry has been in managing information. He recalls how when he started in logistics, before photocopiers were common, exchanging data meant a lot of manual work, or churning out paper copies using mimeographs – a machine that manually pressed carbon paper copies.

Today, of course, so much information is automated, stored and exchanged over the internet. And despite his analog past, Harley has played important roles in enhancing IT systems during his tenure in MP&L, including the implementation of a global order-to-delivery ordering and IT system, which he described to Finished Vehicle Logistics in a major interview in 2010.

“Without technology, we are now beyond the widths of man in managing the supply chain,” he says. “We would not be able to handle or transmit a bill of material.” 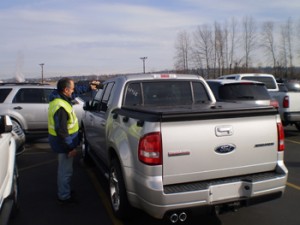 Harley has seen tremendous advances in technology during his career, but he says the skills of drivers and operators are still logistics' most important component
He adds, however, that even if technology has come so far, logistics is still highly dependent on skilled individuals across the supply chain, especially drivers and parts handlers at warehouses and plants. “You want quality components, and the fundamental components of logistics are those drivers. We are still reliant on professional behaviour.”

Harley also points to advances in containerisation and returnable packaging. “The way that we’ve moved from expendable packaging to mostly durable equipment, that is something that we didn’t even think about back then,” he says. “Now they are primary concerns [for Ford].”

Harley also marvels at the changes in business culture, particularly around lean operations. “There used to be no appreciation for lean. It was stack [your materials] high, because you didn’t want to run out. It used to be that you could never have too few, while having too many was forgiven.”

Even more recently, Harley believes that the automotive industry has gotten better at appreciating total logistics and risk-related costs, helped in part by natural disasters and disruptions that have exposed the importance and complexities of the supply chain.

“Logistics is definitely seen as adding value now,” he says. “You have things like segmented inventory, where you make investments in your logistics with a purpose, whether it is managing risk or dealing with complexity. Logistics is no longer happenstance – it is seen as fundamental.”
A part of Automotive Logistics history 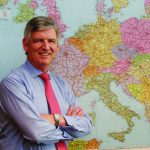 Steve Harley has accomplished a lot in a 42-year career with Ford, from overseeing dozens of production projects and hundreds of launches to gaining recognition in the Gartner Supply Chain Top 25. But one accolade that is perhaps less known has been his role in the very beginnings of Automotive Logistics magazine, and the global conferences that would follow the publication.

Louis Yiakoumi, publisher and conference director of the Automotive Logistics group, points out that Harley was his final appointment on a trip to visit logistics executives to research whether starting such a publication would be a good idea. The reactions he had received were mixed. That is until he caught up with Harley at his former offices in Basildon, in Essex, UK.

“He was so enthusiastic about logistics: why it is important; what a great industry it is,” says Yiakoumi. “He introduced me to companies and people that I should talk to.

“He helped me to decide that Automotive Logistics had a future.”

A chance to redesign the supply base

As it turns out, Harley’s last role for Ford has been an important example of how logistics and total supply chain considerations inform a manufacturer’s strategic operations, from plant layout to building a supply base.

The concentration of production at Valencia, for example, should allow more economies of scale in manufacturing and logistics, but it will also create a highly complex supply chain operation. The plant had previously produced only vans and the small Kuga; soon it will have added three different body styles for the Mondeo, along with the multi-purpose vehicles Galaxy and S-Max. At capacity it will produce 60 vehicles per hour, says Harley, including innumerable options. Better planning for logistics and material flow has been important to this transition.

“We have asked a lot of the Valencia plant, which is an enormous challenge with the different vehicle lines, but the transition has gone exceptionally well,” says Harley. “The Mondeos produced there already are remarkable cars for this stage in the launch phase.”

The move of C-Max to Saarlouis, where it will join the Focus (on which it shares the same platform), will be less of a challenge than the concentration in Valencia, he adds.

With the Genk closure, and a number of other changes in Europe, Ford also has had an opportunity to reshape much of its supply chain network, including, wherever possible, bringing suppliers closer to Valencia than the locations where they had been serving Genk. That transition has gone well, according to Harley, with Ford encouraging many suppliers to move closer to the plant, or to a location that would be best for both Ford and supplier. In some cases, that hasn’t just meant Spain, but also North Africa.

“We have one supplier who used to serve Genk from Romania, and that same supplier has now moved to North Africa to serve Valencia,” he says. “We have since been working on value-stream maps to develop new supply lines.” 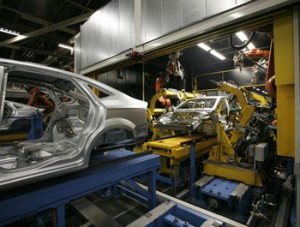 While other cases include moving directly or near to Valencia, Harley acknowledges that moving suppliers to suit Ford’s needs isn’t always the best option. He pointed to social and financial costs to consider, as well as maintaining suppliers’ economies of scale. For a supplier based in eastern Germany, with a low-cost work force and spare capacity, for example, it might not make sense to move to Spain. “We cannot suck up inefficiency, waste and closure costs,” he says.

Harley reveals that Ford had nevertheless targeted a “significant double digit” number of suppliers to move location, of which about 80% have done so. “In every case, the suppliers have worked with us, and in most cases the situations have been resolved,” he says. “Otherwise we compromised, because at an enterprise level, it didn’t make sense.”

For Harley, such compromise and communications with suppliers was in some ways a fitting end to his tenure at Ford, as he has been respected for maintaining good relations with providers and competitors. He has long been an advocate of collaboration across the sector where relevant. Finding good business sense and compromise has been an important aspect of his career in automotive – that will continue in his role at ELUPEG and is likely to go on outside the automotive sector as well.