Glovis Europe general manager Frank Schnelle talks about the company's strategy for consolidating logistics in some markets and ambitions to gain transport assets.

The growth of Kia and Hyundai in Europe has propelled the expansion of Glovis Europe, the group subsidiary tasked with managing the two brands’ logistics. From its beginnings less than a decade ago as an in-plant labour provider and consulting arm for transport contracts, Glovis Europe has slowly, but surely been taking shape as a central logistics function. It has a clear mandate to consolidate Hyundai and Kia logistics flows where that will reduce cost or lead times. In the carmakers’ larger markets, such as Germany, Glovis is achieving this by taking over more operational control.

“Our first step was to consult and convince national sales companies that we could bring benefits, and the next step was to take an operational lead and to link both supply chains to make them more efficient,” says Frank Schnelle, general manager at Glovis Europe, who joined the company five years ago. “Further integration [of logistics] in European markets will take place whenever benefits arise for Hyundai and Kia.”

At the same time that Glovis Europe, a subsidiary of Hyundai Glovis, moves deeper into Hyundai and Kia’s European operations, it is also looking to gain business with other OEMs. According to Schnelle, Glovis is considering acquiring or taking control of transport assets directly in Europe, allowing it to increase its inbound and especially outbound services to both Hyundai-Kia and third parties. Such an approach would put Glovis Europe more in step with Hyundai Glovis globally, which serves a variety of customers in South Korea, has expanded its fleet of pure car and truck carriers (PCTCs) and developed a US port processing arm.

“We will further develop Glovis to operate assets to be in the position to extend third party business,” says Schnelle, who hints that the company is planning on acquiring or establishing operations with another European provider.

There are precedents in Europe today for Glovis’s ambitions. Alliance Logistics Europe, part of the Renault Nissan Alliance, has been consolidating Renault, Nissan and Dacia logistics since 2009. Gefco, no longer controlled by PSA Peugeot-Citroën, now has ‘4PL’-type contracts with GM and Peugeot. But the launch of Glovis as an asset player in Europe, together with its shipping fleet and purchasing role for the Hyundai Group, would make it unique in the market.

Thus far, Glovis Europe has focused primarily on supporting Hyundai and Kia. It was founded in 2006 with the launch of Kia’s factory in Zilina, Slovakia to provide in-plant logistics and oversee services for inbound and outbound. It expanded in 2009 with the start of Hyundai production in Nosovice, Czech Republic and today, Glovis has more than 1,100 employees in Europe, including staff located at both factories, at branch offices such as Vienna and Hamburg, and major vehicle ports such as Koper and Livorno in the south, and Bremerhaven in the north. Its headquarters is in Frankfurt in a building shared with Kia Motors Europe, also not far from Hyundai’s headquarters in Offenbach.

Along with the factories, Glovis manages logistics contracts for both carmakers’ European headquarters – including imports and exports – and national sales companies in 28 different markets from the UK to the borders with Turkey and Ukraine. As each brand generally has a compound in every country, as well as several different ports besides the primary gateways at Koper and Bremerhaven, Glovis Europe is responsible for contracting providers to manage stock, carry out PDI and delivery to dealers for 60 facilities or more.

"Our understanding is that we have to own or control assets to provide value and to offer a service to other parties, so we are looking quite seriously at how to enter the market" - Frank Schnelle, Glovis Europe

However, Glovis’s direct involvement in these operations varies. Having grown out of the plants, it has the most control over the transport operations from both Zilina and Nosovice, and integrates the output from each. Glovis runs block trains each day with volume filled from both factories, for example; these are services which it is currently working to increase, says Schnelle.

At the same time, Glovis looks across the capabilities of providers in all markets to see which companies might be able to offer new services to the factories. In this way, an otherwise French-based provider might have an opportunity to use spare capacity in Slovakia, for example.

Most national sales companies, on the other hand, had been importing and distributing Hyundai or Kia models for 10-15 years before the arrival of Glovis, including managing the local logistics. While these services are today governed by its contracts, Glovis does not manage the daily flows directly for each national sales company. Rather, it provides consulting and manages the tenders for the brands in each country.

This level of integration has already been a breakthrough for Hyundai and Kia in recent years. It has given the companies visibility across each market, setting cost and performance benchmarks for transport and compound services. Glovis has managed an increasing number of tenders on behalf of the sales companies, pooling together the volume of both brands, which otherwise operate separately and compete with one another. “Glovis’s main goal is to consolidate logistics flows in order to lift synergy potentials from a combined market approach,” says Schnelle.

Now, with the growth of both brands, there could be opportunities for another level of consolidation. Schnelle gives the example of Germany, where combined annual sales in excess of 130,000 units have prompted the need to use more logistics providers than in the past. Here, Glovis is taking over more operational management of transport, rather than the somewhat hands-off approach to most national markets. The advantage, Schnelle says, is that Hyundai and Kia get more transport capacity – with loads and backloads shared between the brands – while the complexity of managing more providers and services falls to Glovis rather than burdening the national sales companies. 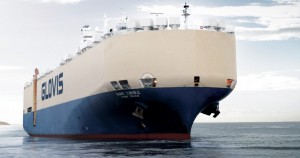 There are further opportunities that could come not only from the integration of Hyundai and Kia, but also across European markets. Carlos Lahoz, director of supply chain for Kia Motors Europe, says the company is exploring the potential for regional distribution centres that could replace or augment some national compounds. Such a move would result in fewer transport moves and less handling for many vehicles. This setup, Lahoz admits, requires a centrally led negotiation between Kia’s national sales companies on stock management that would be separate to logistics. Once those terms were agreed, Glovis would have the opportunity to engineer the network in the most efficient way possible.

However, neither the German example of more direct Glovis operational support, nor the regional hub concept is meant as a model for all of Europe, where different markets require different approaches. “It could be an additional sales tool, but consolidation itself is not the target,” says Schnelle.

Indeed, even the word consolidation can be misleading here, implying as it does reductions in staff or providers. On the contrary, as Germany shows, combining Hyundai and Kia together can demonstrate where capacity needs to be increased. The commercial needs of each brand will always take a priority, so services won’t be reduced at the risk of slower stock turns and sales, says Schnelle. “All such plans would need to support or be linked to the commercial plans of Kia or Hyundai, but wherever we see a benefit to combining Hyundai and Kia, it is worth pursuing,” he adds. “Both companies are a lot more open to co-operating than when I first arrived.”

While Glovis Europe has an objective to improve Hyundai and Kia’s logistics cost and performance, the company also has ambitions beyond the group. These two objectives could come together as it plans to become a more active asset provider. “Our understanding is that we have to own or control assets to provide value and to offer a service to other parties, so we are looking quite seriously at how to enter the market,” says Schnelle. 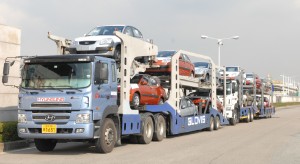 Glovis Europe is already serving third party clients principally in parts logistics, including re-allocating containers back to Asia. For the PCTC fleet, where Glovis is now a major shipping player, there are representatives based in the Netherlands and in Turkey to help co-ordinate volume out of Europe.

Back in Korea and beyond, there is plenty of business with other companies, whether through Glovis’s own assets or otherwise. It transports scrapped steel, caravans and electronic parts for Korean companies, for example. In the US, Glovis America’s processing subsidiary, GAPS, has other OEM customers at ports at the same time that it serves Hyundai-Kia there and at its plants. In India and China, Glovis owns or controls vehicle transporters to move Hyundai-Kia vehicles.

Schnelle says the company has studied these global examples to see whether they might work in Europe. He sees a particular opportunity to link the company’s global supply chain expertise with any assets for complete export, import and distribution services, similar to those offered by the likes of WWL. “We already have our vessels and we could have a lot of business out of Europe,” he says. “Why not link the overseas with the inland management?”

Glovis has spent the last three years exploring different ways of acquiring assets, from joint ventures to starting from scratch, but Schnelle says the company is now close to confirming a move that will be either an acquisition or partnership with another logistics provider, the details of which he cannot yet reveal. “We are close and this decision will give us the opportunity to expand as other logistics companies have,” he says. “It will be a major step.”

Schnelle has ideas for how Glovis might further maximise capacity in Europe, apart from buying assets or contracting with other OEMs. Like Carlos Lahoz at Kia, he would like to work together more with carmakers to share information on routes to help fill empty miles. This does not need to come with a cost of service or competitive disclosure, he says. It could simply be the product of sharing information.

He gives the example of short-sea shipping to Spain. Currently, there is no service out of Koper to the ports where Hyundai and Kia want to go, since the shipping lines don’t want a route without enough return volume. However, if Glovis could co-operate with a carmaker in Spain, then the two might be able to divert their flows and help a shipping line develop a viable service.

“As logistics managers in charge of manufacturers, we can influence volumes in a way that providers can’t, or wouldn’t know about, perhaps. Together, we [Glovis and another OEM] could see and even create more balanced traffic,” he suggests.

Another idea, Schnelle adds, would be for OEMs to harmonise their contract terms and tenders more. In some cases, a logistics provider might see the potential to offer a backflow to a customer, but it would depend upon it winning or retaining business from another OEM, whose contracts might not be bid until the next year. Carrying out the tenders at the same time could support competition on certain routes and perhaps help minimise empty miles. “While some OEMs are open to this, not everyone is open to sharing such information,” he admits.

It remains another ambition for Schnelle, however, for whom avoiding capacity shortages or rate increase is an exercise in risk management. It demonstrates, if nothing else, the company’s commitment to running a network with openness and common sense, similar to its push to further consolidate Hyundai and Kia’s logistics. And it’s a strategy that could serve Glovis well if it succeeds in launching as a fully-fledged provider across the industry.