Enforcing the law in China could cripple vehicle carriers 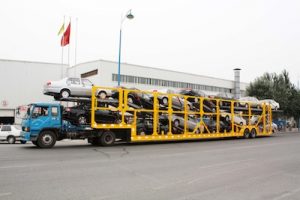 After years of routinely using trucks and trailers that exceed the official width and length requirements, the Chinese vehicle logistics industry could face a rude awakening after the central government toughens its enforcement of road safety rules, according to Zheng Yuqian, vice general manager at one of the country’s largest logistics providers, Anda Group.

Since the Chinese government brought in stricter rules on truck dimensions and road safety in 2005, a large number of vehicle carriers have operated in open violation of the length and overhang rules. At 16.5 metres, China’s official length for trucks is relatively short compared to other countries, and has a lower load factor than trucks that were technically allowed before 2005. Or rather, it would be a lower load factor if companies actually followed the rules.

“In this industry it is surprising to use the normal size,” said Zheng, speaking at the 10th annual conference at the China Automotive Logistics Association (CALA) in Wuhan today. “It is practically a miracle when companies survive that way.”

To get around rules some vehicle logistics companies issue drivers with papers to prove to (or fool) the police that their equipment was built before 2005, and therefore not subject to the current rules. But a large number of carriers simply flout the rules and factor the fines into their rates and charges to customers.

The use of oversized carriers has been well cited and frequently reported in this publication. Logistics executives call these trucks “aircraft carriers”, referring to tractors that pull two trailers at lengths of 30 metres and carry 25-30 cars in some instances. A normal car carrier would likely carry no more than 8-10 cars.

According to Zheng, the Chinese government has repeatedly issued regulations and grace periods to encourage companies into compliance with the law, at the same time that the industry, together with CALA, has lobbied the government for a longer, more flexible standard. However, Zheng accused the automotive logistics industry in China of resisting change, enjoying huge profits in the meanwhile. China’s fleet of around 40,000 car carrier trucks – many of which are owned or controlled by logistics companies that belong to state-owned carmakers – have actually increased their average truck lengths over the past decade. “We lack self discipline. The situation is chaos,” he said.

At the same time, corruption within the government has led to poor enforcement, too often subject to bribes and graft. “The law enforcement capacity is not very good. Some government agencies break the law even though they are the enforcers,” added Zheng.

The rule of law must govern China
However, the status quo may soon be coming to an end. While CALA still remains in discussions with the transport ministry about a new standard, Zheng pointed to macro-policy messages that came out of the recent fourth plenum of the 18th communist party conference, in which China’s president Xi Jinping restated that the country must be governed by “the rule of law”, suggesting that law enforcement policies will become much stricter.

“This will have a far reaching impact on China’s auto logistics industry,” said Zheng. “Our industry was controlled by some special interest parties. This time the implementation of the law will be harsh and strict, and officials won’t be willing to take the risk to lose their titles. We will see many bribes disappear.”

In the meantime, Zheng called on the government to work closely with CALA and the vehicle logistics industry to establish an equitable standard that could help companies have effective load factors without compromising quality. Without such a standard, however, the industry will continue to see thousands of oversized trucks, while the enforcement of stricter rules could lead many companies to go out of business.

“Without a standard, we are like a prisoner constantly waiting for a trial but stuck in perpetual jail custody. We can’t act and it is embarrassing,” added Zheng. “I appeal to the government and the authorities, please give us a standard, we cannot wait any longer.”

However, according to sources at CALA the government is currently studying options of establishing a new, longer standard for vehicle carriers. A review board is currently advising the government, which includes members of major logistics providers and equipment manufacturers, including France’s Lohr. At the conference, Lohr revealed that it had presented sample trailers of 20.5 metre and 25.5 metre length to the Chinese government for consideration in its decision.