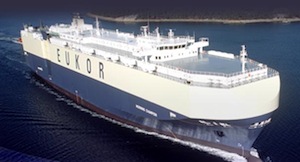 The Eukor Car Carrier shipping line and its Spanish agent Agencia Marítima Española Evge have announced that they are to reinforce the number of calls being made in the port of Barcelona. Henceforth, a new service, NAME, will link the port to both North America and the Far East, considerably reinforcing existing links the shipping line operates between Europe and the Middle East.

In practical terms, this now means that Barcelona will receive three monthly calls from vessels serving ports in the Red Sea and the Arabian Sea.

The company says the need for the additional calls is being driven by “market demand” for regular services offering a certain amount of capacity, which includes provision for all types of over-dimension freight vehicles, as well as project cargo.

The new service will help reinforce Barcelona's continuing strength in the finished vehicles market. In 2015, throughput rose 18% to 881,893 units, breaking the previous record of 801,400 units established in 2007.

The port remains extremely strong in the export market, which accounted for 453,357 units, an increase of 5%. Nevertheless, imports are performing well, growing 41%, which meant a further 172,143 units were absorbed by Spain's domestic market.

Eukor said that by strengthening its call patterns it would be able to offer a regular import ro-ro service to the Mediterranean.