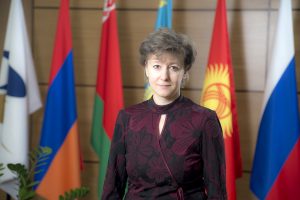 The Eurasian Economic Union (EEU), which comprises Russia, Belarus, Kazakhstan, Armenia and Kyrgyzstan, has lowered duties on the import of electric vehicles (EVs) for a year, running from September 2nd this year to August 31st, 2017.

Currently the duty on light electric passenger vehicles stands at 17% of their value but this will be dropped to zero from September. At the same time, duties on electric powered trucks, currently 15%, will be dropped to 5%. However, the measure will not be applied to hybrids.

“The lowering of duties is intended to encourage the use of environmentally friendly transport in the EEU and to create the necessary conditions for a market for electric cars,” explained EEU trade minister, Veronika Nikishina (pictured).

According to the statement from the EEU’s governing body, the Eurasia Economic Commission (EEC), duties on EVs were previously removed between February 1st, 2014 and December 31st, 2015, a period during which EEU member countries imported 684 EVs.

When the duty exemption ended at the beginning of 2016 it caused a collapse in sales, with only 28 EVs sold during the first half of 2016.

This caused problems for the authorities. “The widespread use of electric passenger cars and trucks should stimulate the development of charging infrastructure facilities,” said Nikishina, adding that when the fee reduction ends in 2017, the EEC should assess the situation again.

Market players have been waiting for a repeat of the drop in tariffs and believe it could restore demand for electric cars and trucks in the EEU. In particular, Renault Russia has already said it is going to launch the export of the Renault Kangoo ZE and Renault Twizy to the EEU, as both conform with the duty exemption.

According to data from consultancy Autostat, sales of electric cars in Russia fell in 2015 by 31% year-on-year and amounted to 122 units. This was a direct consequence of the economic crisis still affecting the country. Nearly half of the EVs sold – 58 – were Tesla Model S units. The second most popular model was the low-cost Mitsubishi i-MiEV, with an overall volume of sales of 27 cars. The remainder was made up of the Nissan Leaf, Lada Ellada, BMW i3 and Renault Twizy.

Mitsubishi has confirmed that deliveries of i-MiEV to Russia were stopped in 2016 based on this low performance. It has not disclosed its plans for re-launching of export supplies.

By contrast, a spokesperson for Tesla said the carmaker had not halted delivery of Tesla cars to regional markets, although a large number of customers had cancelled orders when the EV exemption was removed in January because the price had gone up significantly. The company has not confirmed what its sales policy in the EEU will be following the new drop in tariffs.