Europe conference: how to manage more with less in plants 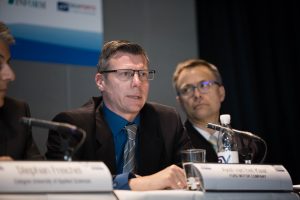 Complex, varied and flexible inbound supply chains increasingly require sophisticated handling and line-feeding processes in plants. In Europe, where carmakers often face space constraints, particularly at older plants in western Europe, there has been more of a focus on developing in-plant strategies that can help to smoothen and buffer varieties in parts deliveries, including relying more on tier suppliers, doing more kitting in plants and, in some cases, outsourcing handling to service providers.

In some cases, however, the biggest issue may be in disconnects between production and plant management with those overseeing the logistics chain.

Speaking at the 2016 Automotive Logistics Europe conference, Björn Klippel, managing founder of Tim Consult, pointed to the challenges of expanding German, French, British or Spanish plants with a limited space. While manufacturers were exploring packaging and line-side presentation to address these issues, he pointed out that one consequence was that OEMs were depending on more modules and equipment from tier suppliers. Additionally, as carmakers consolidate more production on shared platforms or use more common parts, the supply chain itself is growing longer. Klippel pointed to an average distance of full truckload deliveries for large European OEMs as ranging from around 500km per truckload to more than 1,200km.

With this growing distance comes more potential for disruption and uncertainty in the supply chain. Klippel pointed to growing levels of premium freight and air freight as a result. Currently, the largest manufacturers in Europe are spending more than €100m ($112m) a year on air cargo. “It is not something they would admit to, but it is something that is happening,” Klippel said.

Klippel thinks that the issue needs to be addressed from a ‘total supply chain’ perspective, whereby production and plant management are better integrated into the inbound delivery process. “Complex production systems need to get optimised. You need to make more than one function report to one manager, and integrate both sides. On the other side, speaking of solutions, you must learn how to measure effects and understand the price tags of production-orientated decisions,” he concluded.

Stephen Freichel, professor at Cologne University of applied sciences, agreed that some manufacturers were too disjointed in their management organisations, with plants and production operating in isolation to the complexity of the supply chains feeding them. “You have to change things in upper management... production is one piece in the supply chain, and the hard part is to convince production to think 'supply chain',” he added.

According to Freichel, it is no use talking simply about warehousing, crossdocking, handling and moving information flows: OEMs have to consider the whole setup of logistics and include packaging and inventory management, for example. “You have to see the total system, the whole institutional setup. What is a plant doing today?” he said.

Ford of Europe, however, offers an example of how modern car plants in Europe are adapting to manage a more varied parts flow. Axel Van Het Kaar, carline supervisor for material flow and packaging engineering at the carmaker, was recently involved in Ford’s recent $2.6 billion expansion at its plant in Valencia, Spain. Production has increased 40% to around 400,000 units in 2015, and daily production capacity is now up to 2,000 vehicles. One of the key challenges Ford has faced is converting the plant from the old set up with one line, and building in a second line in the same footprint of the plant.

“There is no real additional space generated, and there is tremendous complexity in the plant,” Kaar said.

As a result of this increased part volume and variation, it is no longer feasible for Ford to have significant numbers of parts at the line side, so it has adapted the parts flow from sequencing and direct line delivery in some instances, to more kitting. In this way, parts are delivered and then sorted into kits that move to the line-side based on the production sequence. As well as allowing Ford to better manage the delivery of parts varieties, Kaar said that since the parts picking is not attached to the cycle time of assembly on the line, it can be done at different rates and with more flexibility. “Operators in the kitting area can build up kits and feed to the line on a small buffer,” Kaar said.

Kaar added that Ford had done considerable work to standardise more packaging and containers within the plant. More than 90% of components are shipped in standard containers, Kaar said. “The benefits of standardised packaging include that once a standard is defined, you are likely to be able to fill a truck, and you only need a standard trailer to move parts.” 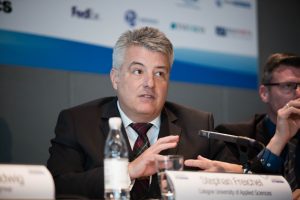 Another question for in-plant logistics is how OEMs manage labour for their in-plant material handling. Carmakers typically take different approaches, with some outsourcing parts handling and line feeding to providers, while others use their own employees. Kaar said that in Germany, there are usually union restrictions in place to move parts if it can be done with your own employees. However, in Spain there are different rules. “The traditional way of looking at it – if you outsource, the labour is cheaper so there's cost efficiency, but you have to make sure the quality is up to scratch too,” he said. “As long as you have good strategy and it's all optimised and they're all described in the right way, it can be done by someone else.”

Klippel said that outsourcing isn't always cheaper, especially with Germany's equal pay rules. “It has to do with resilience... if volume goes up or down it's someone else's problem. It makes you flexible, and that's why we're trying to do it,” he said.

Stephen Freichel, however, warned that OEMs should be wary of “outsourcing problems” to logistics providers. “Don't just push stuff onto LSPs,” he said. “We need live collaboration, and to set up platforms. Structured communication needs to take place: OEMs change LSPs every year and beat them up and wonder why their costs change.”