Exports of German cars to Russia is falling 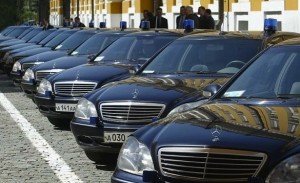 During the first seven months of 2014, supplies of German-made vehicles and parts to Russia have dropped by more than 24% year-on-year, according to the Association of European Businesses (AEB). Russian experts have said that imports are falling following the overall drop in sales in the Russian car market, especially in the premium car segment; by the end of the year those imports could fall by a third, compared to 2013.

Representatives of Mercedes-Benz and Volkswagen Group have confirmed that the fall in sales in Russia has forced them to reconsider the volume of supplies in a number of segments. However, neither would confirm that a further decrease in imports was definite as there were a number of factors in play, which made the market unpredictable at the moment.

Sales of premium and business class cars in Russia are falling more rapidly than the market in general, which accounts for the dramatic drop in German imports.

“In times of uncertainty citizens tend to invest more in real estate and less in vehicles, especially expensive ones,” said Russian automotive analyst Andrei Kozlovsky. “However, the drop in the market and in imports seems too rapid and too deep. If the situation involving Ukraine and Western countries against Russia is not resolved soon it is likely that we will see a boom in the sales of cars in Russia at the end of the year followed by a rise in imports due to the effect of deferred demand.”

That said, the drop in German imports began in 2013, according to data from the AEB, meaning that the Ukraine crisis cannot fully account for the drop. According to AEB, data sales for the whole year dropped 13.5% year-on-year. Moreover, the fall of imports got deeper in the first quarter of 2014, when it fell 17% year-on-year, again prior to the impact of the Ukraine conflict. In contrast, the Russian car market saw a 5.7% drop in sales in 2013, while in January-July of this year it fell by almost 10%, according to the AEB data.

However, the drop in German imports could stop altogether in the coming weeks. According to Andrei Belousov, assistant to the president Vladimir Putin, the Russian government is currently considering a complete ban on vehicle imports in response to US and EU sanctions. Representatives of the government are reported to have said that the possibility that such a measure really would be implemented in the coming weeks was “high enough”.

Merecedes-Benz imports all of its vehicles to Russia, with sales of 44,400 last year, and has stated in recent weeks that it would consider manufacturing in the country, as BMW and VW do, if a ban on imports was implemented.