The number of cars made in the UK fell by 5.5% to 128,799 last month, with domestic demand plummeting by 47.2% to 15,647, according to figures from the Society for Motor Manufacturers and Traders (SMMT). However, production was bolstered by a 6% rise in exports to 113,152 units, with almost 4,000 cars per day being sent to global markets.

“What we would always stress is the importance of never taking one month in isolation,” commented Mike Hawes, CEO of the SMMT, at a press conference held in London on Monday (July 30). “Overall the trend is down [but] broadly in line with expectations”. 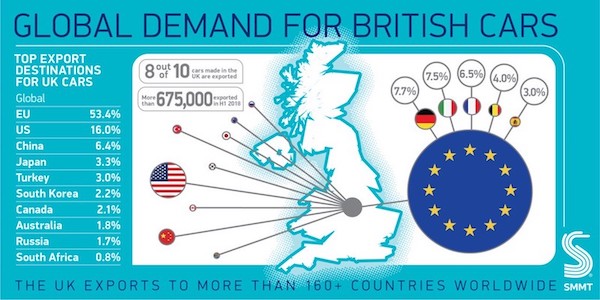 More than 80% of UK-made vehicles are sent overseas, and exports up to June remained relatively stable at 675,187 units, a 0.8% change.

Several key markets saw greater demand for British-built cars, including the UK’s second largest market for vehicle exports, the US, which takes about 16% of the total (+1.5%), Japan (+77.3%) and South Korea (+67.8%). China remained the UK’s third biggest customer, taking 6.4% of exports. However, demand dropped by 3.6% to 360,270 in the largest market for UK-made cars, the EU, which accounted for 53.4% of all cars manufactured for export.

Moving away from tariffs?Hawes said the SMMT welcomed the “increasingly positive tone of the dialogue” between the US and Europe after a recent meeting between president of the European Commission Jean-Claude Juncker and US President Donald Trump, which he described as “encouraging in its commitment to increasing free and fair trade and the reduction of tariffs and non-tariff barriers”.

Hawes said that “any increase in tariffs would be significant and damaging, both to the US and Europe”. He noted that the automotive business was on a “much larger scale” compared with the aluminium and steel industries and would also directly affect consumers.

The SMMT wanted the trading relationship between the US and Europe to “remain strong”, said Hawes, noting that the US is, individually, “the single most important market” for the UK.

Meanwhile, he pointed out that trade with the EU, the UK’s biggest market, “works both ways”. While the EU takes over 53% of UK vehicle exports, about 360,000 units per year, the UK is the second biggest car market in Europe after Germany in terms of demand. In the first half of the year, 69% of cars registered in the country came from the EU. “So anything that happens on that future relationship will affect the industry here and the industry on the other side of the Channel, not just in terms of new cars but components as well,” stated Hawes.

“We still want to see a deal done with Europe. No deal is just not an option; it would be seriously damaging to the industry not just in the UK but in Europe as well.” Going to WTO rules would be “at significant extra cost and burden”, he said.

Hawes suggested that the recent white paper showed that government understood how business operates, and the importance of manufacturing and automotive, but said there were question marks over new customs arrangements, administrative costs and implementation time.

Brexit risks for UK supply chainHawes went on to note that the UK was the fourth biggest market in terms of automotive production in the EU and that OEMs had invested in the country over many years. Volumes continued to increase after the vote to leave the bloc, but this was due to investment decisions taken several years previously. “I’m more concerned about happens in the 2020s, for which decisions are being made now,” said Hawes.

The need to remain competitive is the reason that additional warehousing is not a sustainable solution to the disruption of Brexit, according to Hawes, because it would move the industry away from just-in-time production and add costs. He said there may be a need for it in the short term but that it was not operationally competitive.

Although UK car production was down 3.3%, Hawes said that the components industry had been so far relatively unaffected because vehicle exports were running at 81% – “the highest it’s been for many years”. Hawes said this “underscores the importance of having both a domestic and a broad and diverse international market”.

The situation may change with Brexit. While OEMs clearly have the resources to export around the world, said Hawes, suppliers which have mostly been trading with the UK or Europe will find it harder to adjust.

“The OEMs [and] the tier ones are increasingly getting into the tier two/three supply chain to make sure they are as Brexit-ready as possible. That’s all they can do,” he stated.