The outbound chain is characterised by OEMs and LSPs each using their own words and codes when it comes to things like scheduling, tracking and payment. Malcolm Wheatley discovers some progress toward standardisation, but will OEMs invest in change?

For the two companies involved, the announcement was good news. In June, NYK-owned International Car Operators (ICO) announced that it had selected the SyncroTESS system from Germany-based software provider Inform as the new terminal operating system for its car terminals in Zeebrugge and Antwerp, which between them handled 1.6m vehicles in 2009. 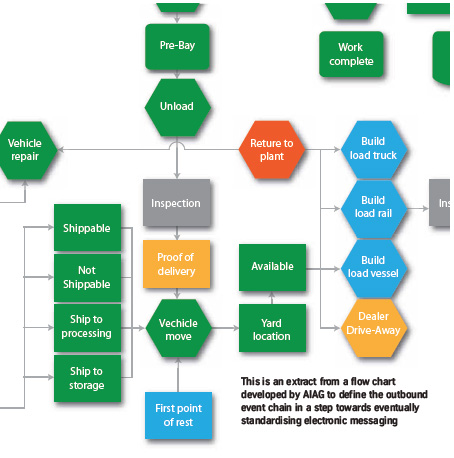 The new system will use advanced planning and optimisation modules to create a highly efficient vehiclehandling process–including the tracking of each vehicle, real time graphical representation of the yard layout and all cars, as well as the integration of handhelds, barcodes and RFID. The planning modules, for instance, will minimise the distance between unloading and loading operations to generate a berth plan and the relevant resource requirement necessary at the various areas within the terminal. At which point, the execution modules will assign tasks to individual workers in a sequence designed to boost labour productivity and vehicle throughput.

The vision, says Jurgen Vanhove, ICO’s general manager of operations, “is to use a modern system to be even more competitive in future”. That’s good news for ICO–and good news for Inform, which gains a respected future reference customer with a challenging and complex operation. But not, necessarily, such good news for the broader vehicle supply chain. Because while the new system enables ICO to impose order on its own operations, interaction with the rest of the outbound chain will still depend on non-standardised and often OEM-specific communications. In short, outside the terminal, nothing will have changed.

Talk to automotive manufacturers and carriers in the finished vehicle logistics supply chain, and it soon emerges that the greatest barrier to increased efficiency and visibility is a general lack of standards across the various reporting, payment, tracking and scheduling systems of logistics service providers. Despite numerous efforts over the years–by both OEMS and providers–to bring these systems together, the general picture remains fragmented.

It’s a fragmentation that gives rise to some very pertinent questions. What exactly does the current tracking and automated systems landscape look like today, for instance? In the light of this lack of standardisation, how well are carriers interfacing with customers and other logistics partners in the overall supply chain? Has the recession helped or hindered progress? And will standardisation emerge without the active engagement and investment of automotive manufacturers?

The costs of not having standards
One thing is clear. The immediate consequence of the lack of standards is greater cost, complexity and confusion than is necessary. And it’s a cost that is being borne by OEMs, carriers and logistics service providers, all of which are forced to deal with this multiplicity of message types.

“There’s something of a Mexican stand-off in existence, with everybody waiting for somebody else to do something about standardisation,” observes Wayne Pollock, managing director of UK-based Car Delivery Network. “Meanwhile, we’re stuck with an expensive people-based process that relies on e-mails, faxes, phone-calls and spreadsheets. It’s all very unstructured, and it results in added cost, errors and limited visibility.” But it doesn’t have to be that way. In terms of the basic processes involved, there’s very little difference between one vehicle logistics supply chain and another: cars move from plant to dealer, along a predictable route comprising ports, ships, rail wagons and road transporters. The complexity lies in the various ways in which that process is described and communicated.

“A logistics service provider acting as a terminal operator can easily receive hundreds of different message types, each from a different customer,” points out Matthias Berlit, head of industrial solutions at Inform’s logistics systems division. “But in truth, there are probably no more than 10-30 unique individual messages–and many of those are very similar: ‘pick up a truck load’ is very similar to ‘pick up a rail car load’, for instance.”

And the potential benefits of standardisation are clear. Studies by Inform–and industry bodies such as North America’s Automotive Industry Action Group (AIAG)–have repeatedly identified an opportunity to eliminate several days of vehicle inventory from the supply chain if a single data standard provided clearer communications, and better visibility as to what was in the supply chain, and where. “An opportunity for improved planning and improved efficiency is being missed,” stresses Berlit. “Yet the logistics service provider has no choice: it must deal with the world as it is, and not the world as they would like it to be.” The trouble is, it’s all too easy to see why the world remains the world as it is: the barriers to progress are only too evident, despite individual automotive manufacturers undertaking initiatives within their own supply chains.

“There isn’t an outbound automotive supply chain as such,” says Richard Barker, managing director of outbound logistics execution system provider Sovereign Business Integration. “Instead, it’s carriers and providers doing their own thing. And that single supply chain won’t happen without a significant shift in the industry’s mindset–because what’s in the interest of the overall supply chain, or the end customer, or the automotive manufacturer, isn’t necessarily in the interest of the carrier or logistics provider who must incur a cost to implement change.”

“The technology is available, it’s the management thinking that needs to change,” agrees Garth Parker, chairman of supply chain planning and execution vendor ProAct. “There’s too much ‘silo thinking’. For change to take place, it needs the automotive manufacturers to pull it together–for if logistics providers try to do it, things will stay fragmented.” And the recession hasn’t helped–even though, as Parker observes, it has focused minds on the need for change.

“Unquestionably, the recession has hindered progress,” says Howell James, Ford’s UK vehicle logistics manager. “Capital has been extremely tightly rationed, and IT and logistics improvements have had to take second place to investing in our products. But as we climb out of recession, things are looking more positive.”

AIAG makes moves to harmonise Precedents for harmonising standards do exist, even when investment funds are tight. Matthias Berlit, for instance, points to the collaborative venture between the AIAG and the Association of European Finished Vehicle Logistics (ECG) to publish standardised cross-industry damage codes in 2009. “The vehicle damage codes are being used by all North American OEMs as well as by more than 600 vehicle inspectors,” notes AIAG programme manager Morris Brown on their publication. “Now, with the introduction of a global standard, we are looking forward to seeing adoption on a global basis.”

Both organisations clearly have the clout to facilitate this if their memberships are willing. AIAG, for instance, includes Caterpillar, Chrysler, Daimler, Ford Motor Company, General Motors, Honda, Navistar International, Nissan and Toyota. ECG, meanwhile, represents the owners or operators of more than 360 car carrying ships, 22,000 railway wagons, 46 river barges and more than 20,000 specialist road transporters. An initiative along the lines of creating IT standards is already underway within AIAG. A ‘call to action’ at an AIAG conference back in 2008 prompted the organisation to setup sub-groups to tackle the industry’s most obvious pain points. Among the groups is AIAG’s Standard Electronic Messaging and Visibility committee, straddling an area of activity defined as the development of standardised electronic messaging in relation to increasing the visibility into finished vehicle logistics. As such, it embraces a huge swathe of activities, business processes, and supply chain participants.

“Everything we looked at required some sort of standardised messaging: even activities such as forecasting, for instance. You can’t have eight different manufacturers doing forecasting in eight different ways–it just isn’t efficient,” says Marc Brazeau, the group’s Detroit-based co-chair, a principal partner with ADMi Consulting and a former director of DaimlerChrysler’s finished vehicle logistics function. The project, he explains, is tasked with the development of standard event descriptions, definitions, messages and communication protocols across the entire finished vehicle supply chain, creating a common definition matrix for how manufacturers and suppliers view the finished vehicle supply chain, and providing a common language for identifying and understanding the key events that occur in the North American vehicle transport process.

The goal is to then create a shared nomenclature, definition, and format for the key events and measures that are used in the finished vehicle supply chain process.

“We’ve now finished the physical event definitions, and have a full closed-loop flow chart detailing the entire chain of custody and ownership throughout the supply chain, across all modes of transport,” reports Brazeau (a section of this chart is on p26). “This includes plant operations, port operations, transit operations, and value added services–and all with harmonised names and definitions. And now, we’re working on the electronic messaging standards to correspond with that.”

The electronic standards should be complete by year’s end, at which point AIAG will formally publish the complete finished vehicle supply chain messaging standard, including an idealised adoption timescale.

Adoption, of course, might not actually be to the published timetable, warns Tom Swennes, vice-president of strategic planning and administration at automotive transport management specialist ICL Systems, and a co-chair of the AIAG committee.

“The reason that there are such a diverse range of solutions now is because of a lack of buy-in at the OEM level,” he notes. “For one standard to emerge, OEMs will have to buy-in to it, and make the investments necessary to change to the new standard. And some of the systems that will need changing are very well entrenched within their businesses–as is the case with their logistics partners. So OEMs need to change first, and then their partners will follow. And the more that OEMs speak with a single voice, the easier it will be for them to make the case for change.”

But the tide of opinion, believes Brazeau, is firmly moving towards change. As an industry, the recession has brought too many carmakers close to the edge, and the benefits of a new standard make a powerful case.

“If we can improve the range, quality, and standards of information that are available to manufacturers, dealers, railroads, trucking companies, ocean carriers, and third party logistics firms, they will be better able to coordinate their transportation activities,” he says. “Even one or two days improvement in the average transit time will free-up millions of dollars of aggregate finance cost over the network as a whole.”

Transaction and IT costs will fall, too. “The big change will be that carriers will only need to use one standard, not several, which will further cut costs,” he adds. “And after three or four years of everybody talking the same language, improvements will undoubtedly follow.”

Europe is behind
And what of Europe? AIAG’s remit, of course, covers only North America. What hope is there for Europe’s logistics providers, carriers and terminal operators such as Zeebrugge and Antwerp’s ICO? Is Odette–the continent’s counterpart to the AIAG– for instance, undertaking a parallel endeavour? “No, we’re not–but we accept that we probably should be,” affirms John Canvin, Odette’s managing director. “It’s something that we are looking at, and that we are talking to AIAG about–most recently in June this year. The industry in Europe hasn’t come up with standards on its own, and as an organisation we’re not only keen to help, but ideally placed to deliver that help.”

More than that, he won’t say. But Europe’s industry has been almost as badly hit by recession as has North America’s–and just as there, the case for change is strong.