Hyundai Kia’s logistics division, Hyundai Glovis, hopes for “some sort of level of normalcy” for the manufacture and distribution of vehicles in the US by July 4, despite railroads being currently under capacity, according to the group’s senior national manager of vehicle logistics, Darren Acker. 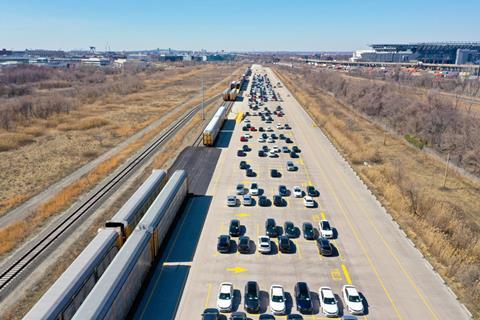 Hyundai vehicles being loaded onto rail at Philaport

Hyundai Glovis relies on rail and truck to distribute vehicles from Hyundai Group’s US production plants and from ports of entry for imported products. Vehicles include Hyundai, Kia and Genesis models. However, a lot of finished vehicle wagons have been put into storage since the coronavirus shut plants and outlets and reallocating them is going to take time.

Speaking at the latest livestream hour hosted by Ultima Media – Finished Vehicle Logistics: Restarting the Network – Acker said domestic operations were currently off to a slow start and the company had initially run into some supplier issues.

“Today, the rail is 21% under load which is still not optimal,” he said. ”We see a lot of rail cars that are not in circulation right now, which is causing some concern.”

Dismantled network
Restarting the outbound logistics network after the coronavirus crisis has been complicated by the slowing of the rail network, which has hurt capacity utilisation, increasing dwell times and leading to rising costs in some instances. Highlighting this, Acker said the rail network for vehicle movements had been “pretty much dismantled”.

Adding to the challenge is the reduction of labour force at some of the rail ramps and altering of hours because of the decrease in production. Acker pointed out that Hyundai Glovis still has a lot of products coming into those ramps and “the flow still needs to take place”.

To mitigate the challenges the company is working closely with its railroad partners to reconstruct and reignite the automotive rail network, focusing on forecasting lead times and adjustments. Acker said that forecasting was a priority when talking about shipping costs because Hyundai was moving volumes from its manufacturing base in the south east of the US across the country.

“Our forecasts show that after July 4 there should be some sort of normalcy from a production standpoint,” he added, though he did point out that “things happen”, citing the recent riots in the country, which were creating some disruptions.

On a positive note, Acker revealed that despite a drop in volumes in February and early March, for the most part vehicle imports had been coming in steadily to the US from factories in South Korea.

Equipped for the future
The challenge now is to get the equipment that was put into storage back into the network, with the demand determining the level and speed of the operation. Acker said Hyundai Glovis was working with its partners and the rail crews daily to forecast production to give them as much time as possible to situate themselves and their equipment.

Regarding the kind of rail equipment the company needs, Acker said it would be predominantly bi-level through to the end of the year.

“From our domestic plants, we have a couple of new vehicle launches that will require bi-level equipment,” he said, adding that Hyundai Glovis was moving toward a greater inventory of SUV and CUV-sized vehicles.

The SUV trend in the US has been gaining momentum over the past few years with pre-Covid figures suggesting the small SUV market segment would amount to $153 billion in 2020, while large SUV revenue would total $160 billion.

Overall, sales volumes in the US are expected to be down by 12% in 2020 and will only recover slowly over the next five years, according to data from automotive analyst Daniel Harrison.