Water woes: how European river transport projects have ground to a halt

Inland waterways can provide a more sustainable option than road or rail. But recent attempts to develop this mode across Europe have shown that it’s far from plain sailing 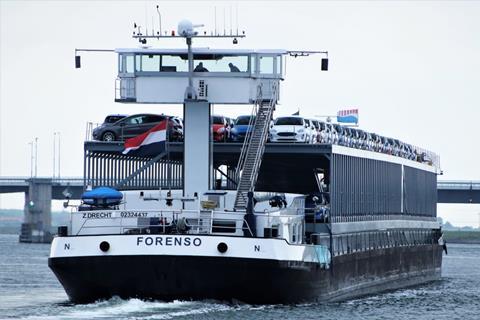 In Russia, Ukraine, Belarus and Poland the authorities are embarking on big projects aimed at boosting cargo flows along key rivers. Potentially, this could provide more opportunities for the European finished vehicle logistics industry, but for a number of reasons it is not clear that river transport in the region will become more popular.

Ukraine, Poland and Belarus have recently launched an important project called the E-40 waterway, which is designed to connect the Black Sea with the Baltic Sea. With an investment estimated at €13.5 billion ($14.8 billion), the new link between the port of Gdansk in Poland and the port of Kherson in Ukraine is billed as an alternative to the Rhine-Main-Danube channel for all kinds of cargoes, including finished vehicles (see Q&A below).

Inland water transport is already used in Europe by the likes of BLG, which has operations on the Rhine and Danube rivers. Direct connections with its own auto terminals have helped to establish inland waterways as a key element of BLG’s network, which handles, transports or processes roughly 6.3m vehicles per year.

“The Rhine and Danube rank among Europe’s most important rivers for inland shipping,” says Vivien Kretschmann, spokesperson for BLG Logistics, who points out that the company’s barges have been plying the Rhine since 1983 and have so far transported 3m vehicles. The five barges currently in service are operated by the joint venture BLG Interrijn Autotransport.

Two smaller BLG vessels traverse the Danube between Germany, Austria, and Hungary. This service has been running since 1997 and has moved more than 300,000 vehicles to date, according to Kretschmann.

“Apart from cargo handling, storage and technical processing in terminals at seaports, on major rivers, and inland, the BLG Automobile division also offers services by rail, road, inland waterway and coastal shipping. An important element of environmental and sustainable logistics is transferring forwarding from the roads to the water,” explains Kretschmann. 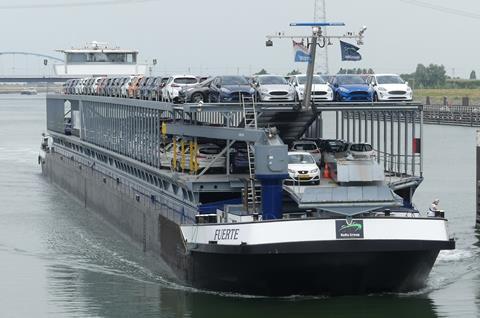 “Each barge can carry some 500 small cars; that is equivalent to around 60 truckloads. A barge travels 3.7 times as far with the same energy input, and compared to rail transport the energy saving is still an impressive 25%. Also, considering increasing volumes of traffic on the roads and railways, inland waterway transport helps relieve the serious strain on the traffic network,” Kretschmann adds.

Nevertheless, logistics companies remain careful regarding their forecasts on the prospects of river transport and the E-40 project in particular. “It’s hardly possible to predict how such kind of plans and ideas will come to life and present time it’s hardly possible to make any assumptions about benefits for Baltic countries,” comments Daiva Balciuniene, finished vehicle logistics manager at Gefco Baltic.

Do you believe the E-40 channel could become a new route for finished vehicle deliveries between northern and southern Europe?
The international E-40 waterway with a length of 2,352.8km should connect the Baltic Sea with the Black Sea. Passing through the territory of Poland, Belarus and Ukraine, the E-40 waterway will connect the Gdansk and Kherson ports with the Vistula, Bug, Pripyat and Dnipro rivers.

E-40 will provide significant time savings for carriers from Poland, Germany and Eastern Europe. Today, in order to deliver goods in this direction, the Rhine-Main-Danube route is used, with a length of more than 3,000km, while the E-40 route is shorter at almost 1,000km. This means reducing the path to the Black Sea by two to four days, with an average speed of cargo river vessels of 10-20kph.

What is the rationale behind the project? Is it about cutting logistics and transport costs?
The restoration of the E-40 waterway will allow the transport of additional cargo and facilitate trade between Ukraine, Poland and Belarus. Inland water transport saves fuel and can be used for transportation of large cargoes. Another expected benefit is the development of a modern logistics infrastructure in the border regions of three neighbouring countries.

In addition, our goal is to renew demand for navigation on inland waterways, as well as to attract investment in the region and create new jobs. Another advantage of inland water transport is its high environmental friendliness compared to road and rail transport.

According to the calculations of experts and analysts, if the capacity of the Ukrainian part of the Dnipro River were to be used effectively, the savings on the logistics component could amount to $50m over five years.

What would be the minimum depth of the channel and what kind of ships would be allowed to use it? Would it require the building of any special fleet?
E-40 includes rivers of 4 and 5 class, with depths from 1.4 m. In order to restore full-fledged navigation by the E-40 waterway, it is necessary to carry out a set of measures on the Ukrainian section in particular: to ensure depth of 1.6 m. on the Pripyat River, and on the Dnipro River from Kherson to Kyiv it is planned to maintain depth at the level of 3.65m. In this case, the construction of a special fleet is not envisaged, but the addition of more vessels for inland waterway transport is predicted.

Can you provide an update on progress?
Unfortunately, as of today, the E-40 waterway is not fully operational. The issue of restoration of shipping by main waterway has been repeatedly discussed at the level of the UNECE [United Nations Economic Commission for Europe] Inland Transport Committee, the ministries of transport and infrastructure of involved countries [and] the research institutions of Belarus, Poland, Ukraine and Germany.

The result of the experts’ joint work was the project ‘Restoration of the E40 waterway on the Dnieper-Vistula section: from strategy to planning’, which was implemented as part of the Poland-Belarus-Ukraine cross-border cooperation programme with EU funding and for which a feasibility study was developed in 2015. The project was an important step towards the implementation of the restoration of the E-40 waterway.

What work on this project is now being planned?
Among participating countries, Ukraine is most prepared for the restoration and development of the E-40 waterway. At the Ukrainian section of the route, the modernisation and repair of the locks on the Dnipro River is already underway.

In particular, the Kyiv, Kaniv, Kremenchug, Dniprodzerzhinsky, Kakhovsky and Zaporizhzhya locks have already completed work for a total amount of 22.7m hryvnia ($927,000) and by approximately the same amount SE Ukrvodshliah is undertaking obligations in accordance with the agreements. At the same time, modernisation of the navigation equipment and dredging works is being carried out on the Dnipro River as well as planned maintenance dredging on the Ukrainian portion of the Pripyat River.

It should be noted that this project provides joint activities with Belarus to seek financing among international financial organisations for the preparation of project documentation, necessary for carrying out works to increase the dimensions of the E-40 waterway. Nevertheless, the biggest problems with shipping via E-40 are located in Poland. These are wetland areas, the deepening of which can cause negative environmental consequences, such as drought in adjacent territories and forestlands.

Cry me a river
In Russia, the river transport industry seems to be in crisis. In the first 11 months of 2019, a total of 98.8m tonnes of cargo were transported by river, down 14.9% compared with the same period the previous year. Moreover, the flows have been observed gradually reducing over the past few decades.

The revival of river transport was among the big infrastructure projects recently ordered by President Vladimir Putin, who noted that during Soviet times rivers held as much importance as roads to the national logistics system.

“Saturation and density of cargo flows on the rivers is comparable to that on the railway in Russia,” Putin said in a government publication in 2016. “Internal water transport has high competitiveness. Yet, the average depth of the commercial waterways in Russia shrank by 25% during the last 25 years, and their length, with guaranteed depth, reduced by 30%. The result is that the cargo flow in this segment has dropped by a factor of 3.3 times since 1990.”

River transport in Russia certainly has vast potential. According to the country’s Transport Ministry, the length of its internal waterways is 102,000km, compared with 41,000km in the US and about 6,000km in Germany.

“With annual sales in the Russian market of 4m finished vehicles per year in 2020, as anticipated a decade ago, and a clear future of the Russian finished vehicle market, this [river transport] project would be of great interest; but we have neither of these” – anonymous source, Russian transport industry

Some big dredging projects are currently underway on the Volga as well as in the Ob-Irtysh basin. With a length of 3,530km, the Volga is Europe’s longest river and forms the core of the largest river system in Europe, flowing from central Russia to the north and connecting the two biggest automotive clusters in the country: Togliatti and St. Petersburg. The latter is also the main gateway for outbound logistics for finished vehicles made in Russia.

Overall investment in river infrastructure in Russia is predicted to reach 236 billion roubles ($3.6 billion) and fleet renewal to hit 1.08 trillion roubles by 2035, according to Russian United Shipbuilding Corporation (USC). A few years ago, the company designed ro-ro river barges, with the idea of connecting the main production complexes in the Volga and St. Petersburg.

Alexey Rakhmanov, director of USC, says: “We have three main issues to handle: cargo base; design, which would have as minimal as possible dependence on the port infrastructure; and then the infrastructure itself.”

He added that preliminary research conducted by USC for some parts of the Kama river showed that the project could be profitable for ro-ro finished vehicle transportation. 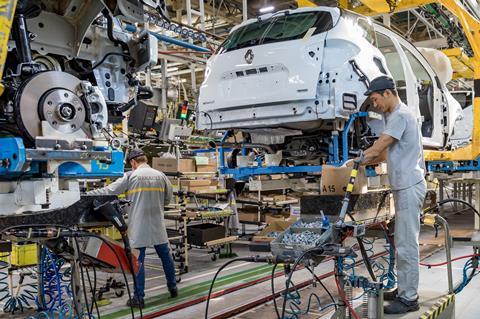 Renault has a manufacturing footprint in Russia and is reportedly considering river transport for cars. Credit: Renault

Gaz, Kamaz and Renault have expressed readiness to consider using this mode, although they pointed to several challenges, particularly the fact that Russia’s climate would prevent deliveries all year round; the Volga usually freezes along most of its length for three months, while the Kama can freeze for even longer in certain stretches.

In fact, during the two years since the project was announced, USC has not been able to find any customers and so the project has been put on hold. When contacted by Automotive Logistics, Ilya Zhitomirsky, director of the information department of USC, had no further details to share.

A source in the Russian transport industry, who wished to not be named, said: “The river barges were designed as an alternative to automotive carriers. With annual sales in the Russian market of 4m finished vehicles per year in 2020, as anticipated a decade ago, and a clear future of the Russian finished vehicle market, this project would be of great interest – but we have neither of these. The capacities to transfer finished vehicles are even excessive in Russia now.”