The US port of Brunswick, which is run by the Georgia Ports Authority (GPA), is to benefit from a $150m development plan that will increase finished vehicle capacity through the Colonel’s Island vehicle terminal to 1.4m units. 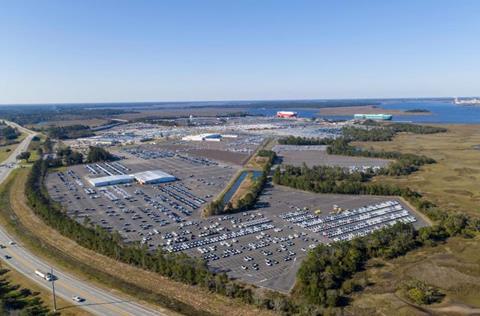 The plan was announced at a Brunswick State of the Port event held on March 9.

“The investments we are making will lay the groundwork for job growth and new opportunity in the Brunswick region,” added Lynch.

Last year the port of Brunswick (including the adjacent port of Savannah) processed more than 647,000 vehicles and is the second busiest vehicle handling port in the US.

The GPA said the new development at Colonel’s Island will add a fourth berth, 360,000 square feet (33,445 sq.m) of new warehousing, and 85 additional acres (35 hectares) for vehicle processing. The new pavement and buildings are slated to be complete in 2023. The new berth will include a concrete deck and system of mooring points, extending ro-ro vessel berthing space from 3,355ft to 4,630ft (1,022-1,411 metres).

“Home to more than 20 automaker brands, Colonel’s Island is poised to become the south-east’s premier autoport,” said GPA Board chairman Joel Wooten. “With more room to grow, better connections to inland markets, and an operation dedicated to ro-ro cargo, Colonel’s Island is the region’s busiest gateway for autos and machinery.”

In addition to growing the finished vehicle capacity, GPA said it would be upgrading near-dock storage areas to better accommodate heavy machinery used in agriculture, construction and warehousing operations.