Better pay and conditions will help solve the capacity crisis

There is currently a capacity crisis in European finished vehicle deliveries and the situation is going to get worse before it gets better, according to the board of the Association of European Vehicle Logistics (ECG), which held its annual conference in the Austrian capital Vienna last week.

One of the main problems is the critical shortage of labour across the vehicle logistics sector. That shortage is felt on, rail and short-sea transport, as well as vehicle compound management both at the ports and inland. 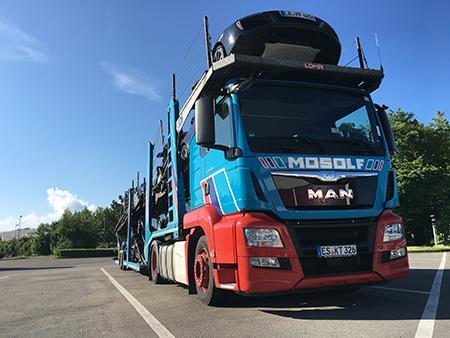 The shortage of truck drivers, in particular, is one of the most illustrative parts of the overall problem. Figures from the International Road Transport Union (IRU), show there were 425,000 unfilled driver roles in 2021, 10% of the total in Europe, and that is likely to increase to 14% by the end of this year.

When storage lots at plants and ports begin to swell because there are not enough drivers to take the vehicles away, the problem is clear.

According to Mike Sturgeon, executive director of ECG, there have already been such incidents, with volume back up threatening continued production at car plants in Europe in the past year. He said the situation has worsened over the last three months and one of the main reasons for that is a lack of drivers.

The finished vehicle sector, which was already suffering a shortage of drivers prior to the Covid pandemic, has seen driver numbers decline even more dramatically since then. Car transport providers are not paid as well as they once were and that is central to the problem. Added to which, the sector has exhausted the available labour pool as recruitment moved west to east across Europe. That problem has been made worse by the war in Ukraine, which took a large swathe of drivers away as Ukrainians returned to fight for their country.

Pay them more
Drivers of car transporters are no longer properly compensated with higher wages for the work they do, which is harder and more dangerous relative to other sectors. Successive years in which rates have been negotiated down are partly to blame. Given the current demand for drivers across those other sectors anyone with a truck driver’s licence wanting to earn a living in delivering goods can pretty much choose the job they want. Without the additional pay incentive, which was previously 30% higher for vehicle hauliers in certain markets but has been impacted by OEM demand for lower rates, why would anyone choose to deliver finished vehicles, asked Sturgeon.

Car transport drivers have to load and unload the cars they move in all weathers, often spending days or weeks on the road in cramped conditions, and with scarce and often low-quality road-side facilities. They are also unlikely to be welcomed with open arms at the dealers to which they are delivering the vehicles.

By comparison, Sturgeon pointed out, delivering for a supermarket means someone else loads and unloads the truck with a forklift and the driver goes home at the end of the day having earned the same money.

“We are going to suffer much more in our sector because the drivers that do want to drive will choose not to drive car transporters,” said Sturgeon.

Encouraging dealers to treat drivers more like customers would go a little way to make the job more bearable, suggested Wolfgang Göbel, president of ECG and chief sales officer at finished vehicle carrier Mosolf. He also pointed to an initiative at Mosolf where drivers are able to securely park in the compounds of Mosolf’s partner companies. In addition, Mosolf is also compensating drivers with longer periods of rest after long-haul deliveries.

Industry and government also need to support young drivers in getting their heavy goods driving licences, which differ in cost between EU member states but can typically cost around €13,000 ($12,800). That can disuade someone from even getting into the general haulage sector.

“How many 18-year-olds have got the money to spend on getting a truck licence? asked Sturgeon. “We need to put something in place that can help.”

The EU also needs to standardise the age of truck drivers at 18 because in some countries a driver has to be 21 before they can qualify for a truck licence, another reason for seeking an alternative profession.

Overall, when it comes to the driver problem the simple message from the ECG is that drivers of car transport equipment need to be paid more and treated better.

“We have to change basic things like these,” said Sturgeon. “We have to make access to role easier and more attractive. Everything has to change.”

Another dimension
In the meantime, the automotive industry has to make the most efficient use of the drivers and equipment it has to hand.

There has been a significant decline the availability of the equipment needed to move cars in Europe. Over Covid the European finished vehicle sector lost as much as 30-40% of capacity, including a significant amount of scrapped equipment. Taking six of the larger car transporter firms providing road services in Europe, the ECG was able to identify that 1,500 trucks had been lost, equal to 27% of the fleet. There are between 5-10% parked up because there are not drivers to move them.

The lead time for building new trucks is currently up to 18 months. So, the sector is looking for ways to squeeze capacity out of the transport equipment it can get its hands on.

One easy win would be an agreement on the maximum weight and dimension for a car carriers in the EU. Trailer lengths vary across the EU member states but there is a technical limit of 18.75 metres at the border under EU law. The ECG argues that an agreed harmonised loaded length of 20.75 metres and a maximum weight of 44 tonnes for cross-border movements would improve efficiency and sustainability. That weight is already allowed under the Combined Transport Directive for journeys within 150km of a port or intermodal node.

“This is something that has been discussed and debated for the last 20 years and there has never been a conclusion, it’s ridiculous,” said Bjorn Svenningsen, vice president of the ECG and head of marketing and sales at maritime logistics provider UECC. “It is such a low-hanging fruit and so easy to improve the efficiency and reduce the emissions.”

Sturgeon said the weights and measures amendment was now on the European Commission’s radar and it had acknowledged the term car transporter but there were a number of other issues to consider at the Commission level.

Rail in Germany
Another pressure on capacity for vehicle movements in Europe is the current rail infrastructure problem in Germany, which has hit available capacity by between 25-30%, sending more vehicles onto an already struggling road haulage sector. The rail freight sector in Germany is estimated to be short of more than 500 trains a day.

According to Sturgeon the German rail infrastructure needs a huge amount of work to improve it and the government has signed off €100 billion investment plan that will take 10 years to implement. There are currently around 1,000 construction projects underway causing route diversions.

“There are already significant works taking place which means that the average train is travelling 25-30% longer than it needs to because it is having to divert around those existing works,” explained Sturgeon. “That means you need 25-30% more capacity immediately to compensate.”

There is also a shortage of traction in Germany, as well as the industry suffering its own labour problems. Added to that, German law prioritises military equipment and energy products, including coal and oil, and rail companies consider vehicle logistics unpredictable so are more likely to sideline the sector in favour of those other commodities.

The situation was recognised by Steve Thomas, head of VLG planning and engineering at Toyota Motor Europe, who said that the rail network in Europe was overloaded, there was significant disruption from engineering work and a prioritisation on the energy sector that was leaving automotive until last.

Thomas said that the situation and the broader challenges being faced by the finished vehicle sector today demanded better communication and collaboration between carmakers and their transport and logistics providers. That includes longer contract terms and long range forecasts to support investment in equipment and services. Thomas also called for faster notification of network problems to facilitate shared contingencies.

Greater support like this is something welcomed by the finished vehicle providers in Europe but it has to be for the long-term and not a short-term tactic to get over the current hurdles in Europe.

“If we fail to solve this in a way that contractual business is working again we end up pushing the OEMs into a solution that is based on spot business with low efficiency and high cost – nobody would like to see this scenario,” concluded Göbel.

Stay posted for further coverage from this year’s ECG conference, including input from Hyundai,Toyota, Volvo and VW Group