The demand is clear: a carbon neutral Europe by 2050. However, the complexities in achieving this target are myriad, especially for the vehicle logistics industry.

At last week’s conference held by the Association of European Vehicle Logistics (ECG) in Brussels, its president Wolfang Gobel talked about the pressures the sector was under in meeting the strict rules on decarbonisation. He asked who would fund the changes necessary to meet the targets and who would be left when operating under the new regime. However, it was clear that the finished vehicle logistics sector would be part of the carbon-free future. 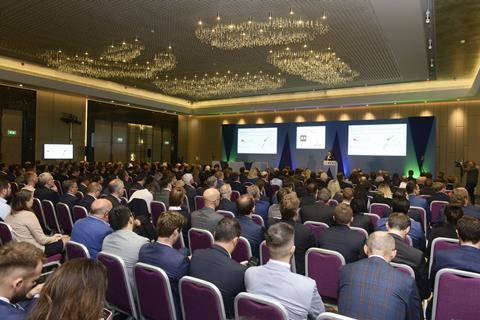 Acknowledging how the industry continued to grapple with the ongoing supply chain disruptions caused by Covid-19, Gobel stated: “The crisis will go away, the sector will remain.”

This sentiment echoed strongly. Roger Stevens, vice-president of global sustainability at Wallenius Wilhelmsen stated that while “carbon will go, shipping will remain,” adding that “decarbonisation is an opportunity disguised as a problem.”

Steep curve
The EU objectives for the transport sector are stern. “Transport emissions must decrease by 90% by 2050 to reach EU objectives,” Dario Dubolino, directorate general for mobility and transport at the EU Commission, said as he laid the objectives clearly to the 350 or so attendees at the ECG Conference. By 2030 the EU aims for 30m zero-emission cars on Europe’s roads and 80,000 zero-emission trucks. It wants rail freight to increase by 50% and transport via inland waterways and short sea shipping to rise by 25%. Then, by 2050, rail freight should double, and transport by inland waterways and short sea needs to rise by 50%.

However, the big question is whether existing infrastructure is able to support this modal shift and the answer is that it is far behind. Bjorn Svenningsen, director of sales and marketing, at short-sea finished vehicle carrier UECC said: “Infrastructure will be put in place, but the timing is the issue.” 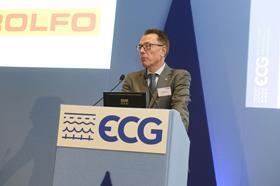 Wolfgang Gobel, ECG president, talked about the pressures the sector was under in meeting the strict rules on decarbonisation

The overriding feeling is that while the EU expects infrastructure and charging facilities to come from the private sector, the industry believes it is the duty of the authorities, the EU and member states, to accelerate the development of infrastructure, such that the investments in decarbonisation they are making are not made in vain.

Another big question is whether companies can actually afford to make all the necessary changes to facilitate decarbonisation? The answer is bleak, for some. “There will be causalities, there will be consolidation,” said Svenningsen. According to Gobel, if you are not going to invest in new technology, you’re going to be removed from the market. “There is no choice but to move forward,” he said.

Chop and change
The cost of decarbonisation inevitably means that some will go under but the demands from OEMs are clear.

“Everything we sell we will report CO2 emissions on from the beginning of supply chain to the end,” said Leon Van der Merwe, vice-president of supply chain and manufacturing at Toyota. He said OEMs would choose the best method and the cleanest operators to move their vehicles, changing where necessary to stronger intermodal distribution models. Toyota is looking to optimise the density of every transport form used, Van der Merwe stressed.

“Our ambition is to have carbon neutral supply chains from 2022,” added Eva Combach, director of worldwide transportation at Mercedes-Benz Cars. That’s a tough goal given that in 2020 each Mercedes-Benz vehicle had 50 tonnes of CO2 emissions per unit. The majority of the CO2 emissions is in the transport of Mercedes-Benz cars as finished vehicles, she said.

OEMs are looking to work together with the industry for carbon neutral supply chains. “Where transport cannot be avoided, emissions must be reduced,” reiterated Combach.

That raises the question of how to measure carbon emissions.

“If you can’t measure it, you can’t mend it,” stated Leon Van der Merwe and this sums up the current dilemma facing the transport industry. A common method of measuring CO2 emissions is as yet being developed. The result is a lack of consistency and inability to compare like for like. There is no clear view on how to calculate emissions from outbound logistics operators, or how suppliers and OEMs calculate emissions.

Furthermore, despite the warnings that the OEMs would only use the cleanest transport, in the ECG’s survey of its members, only 60% said they had been asked by their OEM customers to report on emissions. Eighty per cent said they were already calculating emissions and using more than one tool to do so. However, 40% said that they were using non-accredited or ‘internal’ tools to do so.

Finished vehicle operators are learning about OEM plant closures from the media rather than being told directly, according to speakers at this year’s ECG Conference. The head of marketing at shipping giant Grimaldi said this was a big problem because without clear information on the expected volumes to be shipped problems could quickly occur.

Reallocating vessels because of changes in production schedules and volumes has big cost implications. Bjorn Svenningsen at UECC said while OEMs understood they needed to work with their service providers to get their vehicles to market, there had also been some tough conversations on the subject of compensation for the repositioning of vessels on short notice. Göbel stressed that forecasts were essential and any changes had to be communicated daily.

The current crisis in the automotive industry is being further exasperated by the lack of drivers, a decade-old problem now more serious because of the lack of clarity on future volumes, and where and when capacity will be required. “In the end when the volume comes back will be a question of will we have the right people in place.”

Will OEMs continue to produce higher margin models and lower volumes once the industry-wide chip shortage eases? Reports indicated that Daimler and BMW aim to do just that but other OEMs disagree, and analysts point to history, stating the overriding sales rivalry between top players means volumes are critical. “OEMs are currently just greedy, they will go back to volume production,” said Stevan Van Arsdale, manager of the Automotive Advisory at market analyst PWC. Toyota’s Leon Van der Merwe, backed the point up when he admitted: “Car sales are always more important.”