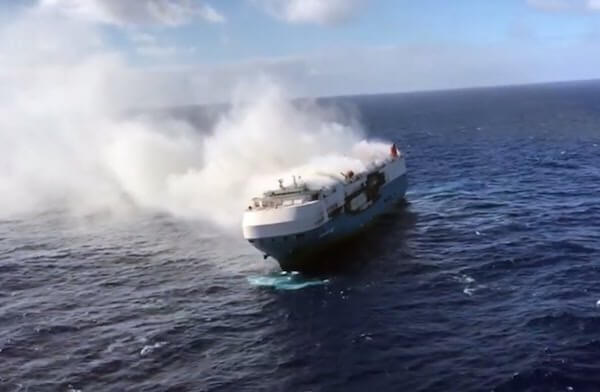 The Sincerity Ace car-carrier, which caught fire in the Pacific at the beginning of this year with 3,500 Nissan vehicles onboard, is now in Japan after being towed there by the Nippon Salvage tug Koyo Maru. The tow began on January 9.

A spokesperson for the ship’s owner, Shoei Kisen Kaisha, said it had stopped in Shibushi Bay in the southern island of Kyushu on January 30 where the list affecting the vessel was corrected. It then departed on February 7 for Yatsushiro port, also in Kyushu, for a debunkering operation.

Global shipping news source Tradewinds reported that after damage assessment and temporary repairs, the Sincerity Ace would sail to Mokpo, South Korea, for full repair, though Shoei Kisen Kaisha said a final destination had yet to be decided. The news outlet also said it was unlikely any cars would be salvaged.

Asked whether the loss of 3,500 new vehicles would hit deliveries in North America, a spokesperson for Nissan told Automotive Logistics that there had been no impact on customer orders and the company was continuing to work closely with its logistics suppliers.

The fire broke out on Monday December 31 while the vessel was on its way from Japan to Hawaii. The crew of 21 were unable to extinguish the fire and were forced to abandon ship. Five of them were subsequently lost at sea.

“The 16 surviving crew members have all disembarked from the vessels that rescued them and have been checked out by a medical professional and deemed to be in good condition,” said Shoei Kisen Kaisha in a statement. “Our thoughts and prayers are with the crew and their loved ones during this difficult time.”

The cause of the fire is still unknown but the vessel’s owner said it would work closely with appropriate authorities to try and determine it.