For UK carmakers, ‘Global Britain’ may not be enough 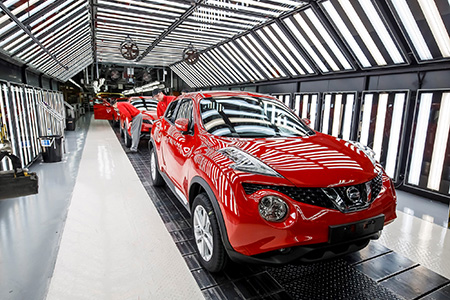 Production of Nissan Juke and Qashqai at Nissan Sunderland Plant

The Society of Motor Manufacturers and Traders (SMMT), the UK automotive trade body, has welcomed the UK government’s ambitions to develop new free trade deals that could benefit the automotive industry, including with large markets like the US and China, after it leaves the European customs union.

However, the group warned that such deals might have limited benefits for the sector if not done correctly. It is also unlikely that global trade deals would quickly compensate for potential losses in trade should the UK fail to secure a comprehensive arrangement with the European Union after it leaves the bloc.

The European customs union allows for the free flow of goods across the EU and Turkey. Only by leaving it would the UK be able to negotiate its own bilateral agreements with other countries.

Mike Hawes, chief executive of SMMT, told journalists during a press briefing in London that SMMT wanted to see more global trade for the UK automotive industry and was thus open to new trade deals. He welcomed the recent comments by Donald Trump shortly before his inauguration as US president that he was interested in doing a trade deal between the US and UK, as well as the meeting scheduled between Trump and the British prime minster, Theresa May.

However, Hawes warned that global trade deals would not be an easy ticket to success. It is unclear, for example, to what extent the ‘America first’, protectionist policies espoused by Trump will allow the UK automotive sector to benefit in an eventual US-UK deal, he admitted.

“We want trade deals but they must be the right deals, not rush deals. Failure could damage UK automotive manufacturing beyond repair,” he said.

Hawes emphasised the primary importance of a free trade and customs agreement with the EU for the UK automotive sector. The EU was by far the largest market for UK exports, at nearly 760,000 cars in 2016, a 7.5% increase from 2015. Any barriers to the current open trade enjoyed between the EU and UK would risk significant harm to manufacturers on both sides of the English Channel, according to SMMT.

Hawes also pointed out that supply chains cannot be changed quickly to serve new markets. Even if free trade deals – which typically take years to negotiate – could be agreed in short time, adjusting to serve those new markets would take time. And given the scale of UK exports to the EU, the would be unlikely to compensate for lost trade if an adequate trade deal was not agreed. British car plants shipped almost as many vehicles to tiny Belgium in 2016, for example, as they did to China, according to SMMT figures.

With the EU, the UK currently enjoys both logistical proximity and regulatory harmonisation, reducing barriers to trade. ‘Non-tariff barriers’, including differences in legislation and compliance as well as logistics and customs bureaucracy, could add the equivalent of a 20% tariff in trade, added Hawes.

Variations in US and EU legislation, for example, are a bigger reason why many UK plants and their supply chains do not currently export to the US than the relatively low 2.5% tariff on most vehicles imported into the country, he said.

The UK cannot begin official negotiations for bilateral trade deals until after it has left the EU and customs union.

Agreeing separate bilateral trade deals with other countries will be complicated enough, but Hawes highlighted just how complex the agreement between the UK and EU will be.

Special trade and customs arrangements for the UK automotive sector are a stated aim of the UK government in Brexit negotiations. Hawes said that he believed European partners would look to avoid economic damage, however he acknowledged that it would “be difficult to separate economics and politics”.

That could make it harder for some EU member states to accept favourable trade terms for specific sectors, or for giving the UK privileged access to the single market without following all of its rules.

Even outside politics, there is no shortage of technical pitfalls to a UK-EU trade deal. Hawes highlighted rules-of-origin requirements as an example. Typical free trade deals usually call for around 55% of components to be sourced locally for free trade terms to apply to cars manufactured in a country or trade bloc.

However, on average models currently built in the UK have local content levels of 41%; of the 59% that is imported, 65% comes from the EU. That would suggest that most UK models would not meet acceptable local standard without counting EU content as ‘local’.

There is also uncertainty over whether WTO rules would allow specific sectors to join a customs union but still have separate agreements with other countries, as the UK government has stated it would attempt to do for sectors like the automotive industry. Hawes pointed out that Turkey is a member of the European customs union for its entire manufacturing industry, not subsections within it. More fundamentally, the UK would not even be a member of the WTO until it applied and gained entry after Brexit.

“But those questions are probably about 18 months ahead of where we are currently right now,” Hawes admitted.