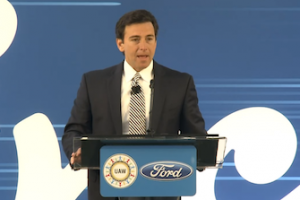 Ford has confirmed it is cancelling plans to build a $1.6 billion assembly plant in San Luis Potosi, in north-central Mexico, citing slowing demand for the smaller vehicles intended for the plant for the move, rather than recent criticism from president-elect Donald Trump over production in Mexico for export to the US.

As planned, however, it will still move smaller models such as the Focus to Mexico, though it will build them at existing plants there.

Ford’s investment in Michigan is aimed at supporting the production of an autonomous hybrid and fully electric-powered SUV as well as a hybrid version of the Mustang. The Flat Rock plant currently makes the Mustang and, from this year, the Lincoln Continental. The move is expected to add about 700 jobs to the plant.

Ford will move production of the Focus sedan from Wayne, Michigan to its plant in Hermosillo, in north-west Mexico, which currently builds the Fusion and Lincoln MKZ sedans. Ford had also planned to move C-Max production from Wayne to Mexico, though it was not immediately clear if this model would also be built at Hermosillo.

Fields also confirmed 7 out of 13 new alternative powered and autonomous vehicle models it will introduce. These include hybrid versions of the iconic F-150 pickup and Mustang in the US, a plug-in hybrid Transit Custom van in Europe and a fully electric SUV with an expected range of at least 300 miles (480km) for customers globally.

The revised plans will obviously have impacts on Ford’s North American supply chain, including eliminating what would have been a large plant in central Mexico with primary exports to the US; instead, it will concentrate more hybrid and electric production and development in the Midwest.

Ford has been under heavy pressure for around a year and a half over its Mexico operations from Trump, who has repeatedly threatened to impose import tariffs on goods moving from Mexico to the US and to renegotiate or pull the US out of the North American Free Trade Agreement (Nafta). Ford’s plans become even more of an issue after it announced plans for the new plant last April during the election campaign.

During the campaign, Trump referred to Ford’s plans for a new plant in Mexico as an “absolute disgrace”. In November last year, he took credit for preventing Ford moving Lincoln production from its Kentucky plant. While that was spun as a move that saved a US facility, Ford actually had no plans to close it but instead wanted to replace production of the Lincoln MKC there with the Ford Escape.

Trump and his team have now claimed the decision against the Mexico plant as a victory for their proposed policies. Fields did say Ford was encouraged by “the pro-growth policies of president-elect Trump and the new Congress”, which had indicated tax and regulatory reforms that were critically important to boost US competitiveness and secure jobs in the US. He called the move a “vote of confidence” in those proposals.

However, Fields cited the impact of decreased demand for its small cars in the region, which no longer required the huge capital investment in a new plant. He said the company would have made the decision regardless of Trump’s policies. Ford and other carmakers have been adjusting production in North America to account for slowing sedan sales.

“Now, all of these factors, coupled with segmentation shifts which we are seeing in the marketplace and our effort, of course, to fully utilise the capacity at existing facilities, have prompted us to invest in Flat Rock’s expansion and to cancel building a new plant in Mexico,” said Fields.

This week, Fields reiterated figures that chairman Bill Ford had cited last year in response to Trump’s criticism, stating that the carmaker had created 28,000 jobs and invested $12 billion in the US at its plants during the last five years.

A production and logistical hubMexico remains a major vehicle, powertrain and export hub for Ford. Along with Hermosillo, Ford also has a plant at Cuautitlán, outside Mexico City, making the Fiesta for the Americas, an engine plant in Chihuahua in the north of the country, and a transmission plant in Irapuato, in central Mexico. It has already broken ground on a $3 billion investment for a new engine plant in Chihuahua and another transmission plant in Irapuato. Ford has not indicated any changes to these plans.

The decision to cancel the new plant, however, is a significant blow to the Mexican automotive industry and supply base. Mexico’s Economy Ministry said in a statement that it regretted Ford’s decision to pull investment out of the country.

It added that it would require the carmaker to reimburse the state government for its expenditure on the project. In an interview with Automotive Logistics in 2016, Ford Mexico’s president, Gabriel López, said the government in San Luis Potosi had committed to building new access roads and extending a rail link to its plant.

According to Ford, while some land clearing had begun, it has not started construction of the new plant. It remains unclear what tier suppliers may already have invested in support of production at the proposed plant.

López told Automotive Logistics that logistics was “the primary driving force” in Ford’s selection of San Luis Potosi for the new plant. It has good rail and road links and is closest to the highest concentration of Mexican suppliers serving Ford. The carmaker had already been using a consolidation centre and cross-dock there since 2007, for example, and was looking at the potential of expanding its use.

Concentrating more production at Hermosillo, with the Focus and other small models, is likely to involve higher logistics costs for Ford, at least within Mexico, given its location relatively far from the centre of the country’s supply base. When that plant was built in the 1990s, most Mexican suppliers were low value assemblers located close to the border, while today the country has a high concentration of suppliers, especially in central Mexico in and around the Bajío region, where many new plants are being built.

Clearly, however, any increases in logistics costs and any compensation to the Mexican authorities over the cancelled plant will be offset by Ford’s savings in capital investment.

Ford’s reversal of its plans for the San Luis Potosi plant may bring some logistical relief to GM, which already has a plant in the city, and to BMW, which is building a new factory that would have been a few kilometres away from Ford. López said the local government had been conducting a traffic study to determine potential bottlenecks.

GM responds to Cruze criticismOn the same day that Fields was explaining Ford’s volte face, General Motors responded swiftly to separate criticism from Trump about its production of the Chevrolet Cruze in Mexico.

Trump said GM should be subject to a border tax for exports of the Cruze to the US. However, the carmaker underlined the relatively small number of vehicles involved and said the majority of Cruze vehicles sold in the US were actually made there.

In a tweet issued on January 3rd, Trump said: “General Motors is sending Mexican made model of Chevy Cruze to US car dealers-tax free across border [sic]. Make in USA or pay big border tax!”

A spokesperson for the GM told Automotive Logistics that last year, US hatchback sales (i.e. those made in Mexico) totalled 4,500, out of overall Cruze sales in the US of 190,000.

GM’s Mexican plant in Ramos Arizpe started making units of the Cruze hatchback in the middle of 2016 for both domestic and export markets.

In June last year, GM said demand for the Cruze from its Lordstown plant was outstripping the US plant’s ability to supply and that it would be adding the Cruze to the assembly line at the Ramos Arizpe plant as a result.

“Lordstown Complex is currently running three shifts to produce the 2016 Chevrolet Cruze, which is off to a strong start,” said GM in a statement back in June. “In an effort to meet customer demand for the Chevrolet Cruze, GM will be utilising existing production capacity in Ramos Arizpe, Mexico, to supplement production at its plant in Lordstown, Ohio.”

The Ramos Arizipe plant also currently makes the Chevrolet Sonic, which it began producing in 2012.

GM is currently investing billions of dollars to expand production in Mexico further.

Questions around US-Mexico automotive trade, potential changes to Nafta and other issues will be discussed in depth during the forthcoming Automotive Logistics Mexico conference taking place from January 31st to February 2nd in Mexico City.