Ford Motor Company is looking to increase the percentage of returnable packaging and special racks that it owns by up to 50%, as the carmaker seeks to gain more control over its assets in a number of important markets around the globe

Vehicle manufacturers rightly consider packaging to be a vital part of their logistics networks. The question as to whether returnable packaging ownership and management should be in-house, left to suppliers or outsourced varies among and within OEMs depending on a number of factors, including the region, the type of packaging, and, of course, the costs (read more here).

At Ford Motor Company, its returnable packaging network is multi-faceted and geared toward logistics optimisation. It is currently undergoing changes that will enable it to achieve greater control of its packaging and greater efficiency in its supply chain, including owning more packaging.

Packaging efficiency begins with its design, and Ford sees having control of this as essential to saving costs. Daniel Hettel, chief engineer, global material flow and packaging engineering, says that the advantages of designing and procuring packaging in-house include greater flexibility among vehicle nameplates and platforms, better forecasting for future vehicle programmes, more standardisation, and greater influence over part designs and sourcing decisions.

Owning and controlling the fleet

Hettel says that Ford owns specialised steel racks and moulded plastic trays in Europe and North America. In Europe, the carmaker also owns its standard pallet boxes, which are large folding containers. Greater Ford ownership is especially true for specialised steel racks and unique containers that it designs for specific parts. By contrast, in South America and the Asia Pacific region, tier suppliers own most of Ford’s packaging.

“Currently, Ford owns between 25% and 30% of its packaging. Our strategy is to move toward a higher level of Ford-owned containers. In-house ownership will increase for our vehicles during the next two or three model years,” explains Hettel. This change will begin in North America, and will eventually expand to all regions. “We expect that Ford’s container ownership will increase by 30% to 50% by the time of full implementation,” he adds.

Hettel explains that one of the main reasons for Ford owning more containers is to gain more control over its fleet. If the company’s tier suppliers own the containers sent to Ford factories, they can use whatever they want, but if Ford owns them, it can gear the containers toward its requirements. Hettel reels off a list of other benefits that the company expects to gain from owning more packaging, including control over the quality and durability of packaging; reducing the risk of part damage during transport; eliminating the supplier’s packaging cost from the material piece price; driving standardisation of packaging; ensuring compatibility with conveyance methods; and optimising density for freight savings.

"Third party networks could offer containers for other companies or industries rather than shipping them overseas empty, helping the business case for international returnable containers" – Daniel Hettel, Ford

Outsource where it works

In-house packaging ownership is not the only option that works for Ford. In Europe, Ford also rents handheld containers, which Hettel thinks makes a good business case thanks to industry-wide standards. “Totes offer a unique opportunity in Europe because there is cross-industry standardisation that does not exist in other regions,” he says. “This standardisation provides for a wide availability of totes across the region. Our European operations have been very successful in utilising this pooled container process.” 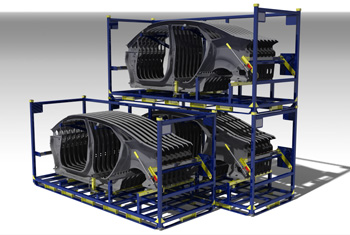 Although the tote pooling system is outsourced in Europe, Ford oversees all transactions and controls the overall system.

Ford is also looking at alternatives for pooling standard containers in other regions as well, as it uses few such systems outside Europe. “We pool wire baskets in North America. On the other hand, we do not pool plastic pallet boxes in North America because there are too many types,” says Hettel.

In North America, South America and the Asia Pacific region, Ford also uses totes that its component suppliers own and maintain. “For overseas shipments, the question is whether we can agree on a standard pallet-box to move parts, for example, from Europe to North America, and whether we can do it across a wider scope. We would use an outside supplier to facilitate this in the early stage,” explains Hettel.

Ford manages its empty containers, which ensures the proper tracking of container quantities and locations. This leads to a lower risk of containers not being available to support production. Hettel says that mitigating the risk of production loss is the primary driver.

On the administrative side, Ford manages its packaging through its material management system. Hettel says that it manages both full containers and empty containers through the same system, providing the same inventory controls for containers that it has in place for production vehicle parts. In January, Ford introduced its Global Packaging Portal (GPP), which is a web-based application used for input and approval of packaging proposals for production parts.

GPP engages suppliers and facilitates the submission of standardised packaging proposals that include data and images. “Prior to GPP, our system was based on Excel spreadsheets,” says Hettel.

GPP’s benefits include a common global website for supplier input and viewing the status of proposals, a common packaging form, workflow management through the approval process, and online benchmarking and reports. Ford initiates the packaging designs for all of its company-owned packaging and initiates the design on some supplier-owned packaging that is critical in terms of quality, freight, pack density and line-side presentation.

Tracking near and far

Aside from owning more of its own packaging, Ford is trying to use more returnable packaging for its overseas shipments. Hettel says that Ford currently ships engines and transmissions in returnable racks. For this strategy to be cost-effective, overseas shipments would require a good network of standard containers that companies can use for other products on the return leg. “Third parties can offer a network that could utilise containers for other companies or industries rather than shipping them overseas empty. This cost-sharing helps make the business case for international returnable containers,” he explains.

Hettel says that Ford’s biggest aim with packaging is to minimise container investment and freight expenses while providing maximum part protection, superior ergonomics and maximum reuse among vehicle platforms. “Part of this challenge is that our performance in tracking empty containers is not as good as it is in tracking incoming material,” he reveals. “Errors in the management of empty packaging can lead to discrepancies in our tracking process.”

Hettel notes that if Ford could add RFID tags to the packaging, it could track both full and empty containers. “We want to use inexpensive, durable, passive tags. Here, we see an opportunity for cooperation across the industry in developing a common solution,” he adds.

The industry is likely to be watching Ford’s moves on returnable packaging very carefully. Debate will continue on the benefits of OEM versus tier supplier ownership, as well as rentals. However, as Ford’s example shows, there is unlikely to be one solution for any single company, given the variety of packaging standards both within certain regions, and between them. Returnable container management continues to be an outsourced function for the company, particularly in Europe. For Ford, the emphasis is on controlling its container movements and the quality of its packaging – whether it owns the asset or not.